Monday June 11: Five things the markets are talking about

Market mood remains cautiously ‘risk-on’ as we begin one of the busiest weeks of the calendar year. Global equities are tentatively trading in the ‘black’ as sovereign bond prices fall. The EUR and Italian bonds have jumped after the country’s new finance minister over the weekend confirmed his commitment to the common currency.

Despite the market noise, investors are preparing themselves for more geopolitics to dominate this week’s market activity – Trump is somewhat confident about tomorrow’s summit with Kim Jong-Un. Mind you, he implied that in Quebec on the weekend at the G7, before his Twitter rant, which ended with deepening tensions over U.S tariffs and saw a dispute erupt between the U.S and Canada.

After that, investors shift their focus to a number of Tier I central banks monetary policy decisions – on Wednesday, the Federal Open Market Committee (FOMC) is expected to hike interest rates, while the European Central Bank (ECB) officials are poised to hold the first formal talks on ending it’s bond-buying program (QE) Thursday, while the Bank of Japan (BoJ) meets early Friday, with no change to policy expected.

In Japan, stocks gain in thin trade as markets await the U.S-N. Korea summit. The Nikkei share average rallied +0.5%, while the broader Topix advanced +0.3%, but volume was low, with only +1b shares changing hands, the lowest level in two-weeks.

Down-under, Aussie markets were closed due to a bank holiday, while in S. Korea, the Kospi rallied +0.7%.

In Hong Kong, shares rose slightly overnight, ahead of tomorrow’s historic U.S-North Korea summit that the market hopes might pave the way for an end to the nuclear standoff on the Korean peninsula. The Hang Seng index rose +0.3%, while the China Enterprises Index gained +0.1%.

In China, stocks closed lower for a third consecutive session overnight, on investor concerns over the liquidity conditions in the market. The Shanghai Composite Index touched its lowest level since last May before closing down -0.5%, while the blue-chip CSI300 index was unchanged.

In Europe, Euro indexes opened broadly higher and have maintained that trend ahead of Wall St. open. Euro financials are well-supported following assurances from Italy over the weekend that they are not interested in leaving the Euro. 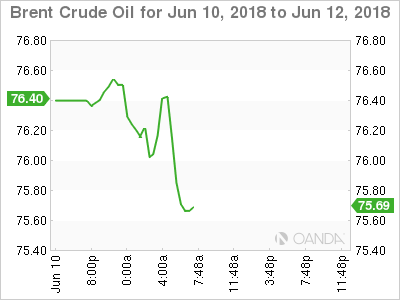 Oil prices are under pressure starting the week, pulled down by rising Russian production and the highest U.S. drilling activity in more than three-years, but supported by concerns over future Iranian and Venezuelan output.

Data on Friday showed that the number of new rigs drilling for oil in the U.S rose by one last week to +862, it’s highest since March 2015, according to Baker Hughes. This would suggest that U.S crude output, already at a record high of +10.8m bpd, could climb even further.

Analysts expect higher U.S. output to offset supply curbs by the Organization of the Petroleum Exporting Countries, which have been in place for 18 months and have pushed up prices significantly over the last year.

Nevertheless, dealers remain concerned by falling supply from Venezuela and the potential of lower exports from Iran.

Note: Venezuelan production is falling due to sanctions, economic crisis and mismanagement, while Iran faces U.S sanctions over its nuclear program that are likely to curb exports in the next few months.

OPEC and its partners are due to meet on June 22-23 in Vienna.

Ahead of the U.S open, gold is trading steady overnight with investors awaiting key central bank policy meetings and the U.S/N. Korea summit this week for direction. Spot gold is steady at +$1,297.75 per ounce, while U.S gold futures for August delivery are -0.1% lower at +$1,301.60 per ounce. 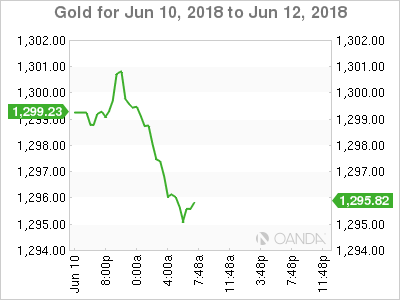 3. Sovereign yields back up in risk-on mood

In early trade, German Bund yields have backed up, signalling risk-on sentiment despite a spat between the U.S and its G7 allies over the weekend. The 10-year Bund yield is trading at +0.47%, up +3 bps. Also providing some bond price pressures is the reassuring statement by Italy’s new finance minister over the weekend that a euro exit is out of question. Italian 10-year BTP yield has fallen by almost -25 bps as a result to trade around +2.85%.

Next up, bond investors will be eyeing the ECB’s meeting Thursday, which will potentially offer fresh information regarding the end of QE. If so, it should be EUR positive and partly counterweigh the potentially more ‘hawkish’ Fed meeting expected on Wednesday. 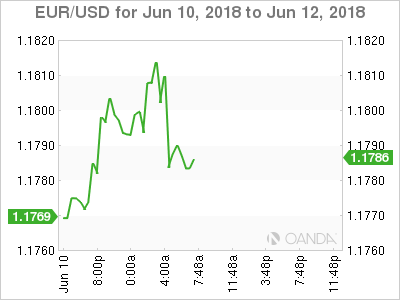 EUR/USD (€1.1788) temporarily traded above the psychological €1.1800 for a good portion of this morning early session after Italian Economic Minister Tria gave the markets more reassurances that the new government had no intention of leaving the Euro. The pair has been well contained in its €1.15-1.20 trading range. Investors’ key focus will be the ECB statement on Thursday for hints of when the QE bond-buying program would end.

GBP/USD (£1.3368) saw its earlier gains slip away after disappointing trade and production data for April (see below). GBP/USD slipped from £1.3420 to new intraday lows atop of €1.3360 after the data miss. Market focus again turns to the political front as PM May is expected to urge potential Tory rebels to get behind the party ahead of crucial votes on the E.U Withdraw Bill tomorrow.

The NOK ($8.0625) is a tad softer ahead of the U.S open after Norway CPI lagged forecasts (+0.1% vs. +0.3%e m/m). The data miss would likely to keep Norges bank on hold until later this summer for its first potential rate hike. 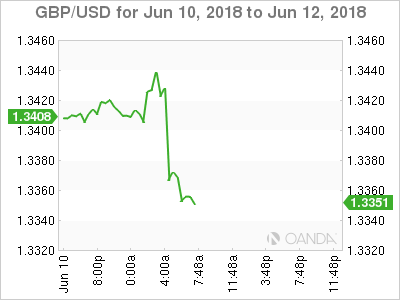 Data this morning showed that U.K factory output fell in April at the steepest monthly pace in six-years, which would suggest that weakness the U.K economy witnessed in Q1, has firmly extended into Q2.

Today’s report provides further proof that the U.K economy’s slow start to the year had deeper causes than a patch of bad weather, and should add to market doubts that the BoE will raise interest rates again this year.

British manufacturing output declined -1.4% in April compared with March, and the largest monthly fall since October 2012 according to the ONS.

Digging deeper, output fell across the board, in sectors including auto production, metals and electrical machinery.

Overall industrial production declined -0.8% on the month, as a pickup in oil and gas output partly offset the poor performance of manufacturing.

Note: The U.K economy has been lagging its counterparts as uncertainty over the country’s future ties to the E.U continues to weigh on activity and investment. 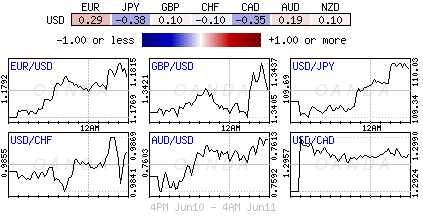