The second quarter of the year did not enjoy a good start in Japan, with inflation and business indicators slowing down to warn policymakers that a move from stimulative monetary policies is probably not a good idea this Friday.

Early on Friday at a tentative time, the Bank of Japan will make an announcement on interest rates and deliver its rate decision statement. Policymakers are widely expected to refrain from raising borrowing costs, maintaining short-term interest rates at minus 0.1% and keeping their ultra-easy monetary policy in place. This also includes continuing to buy government bonds in order to hold the yields on 10-year Japanese government bonds around zero percent.

It was late February when markets got optimistic that inflationary pressures in Japan had heated up as the core CPI edged closer towards the BoJ’s price target of 2.0% on an annual basis (though it was still far below that level, at 1% y/y). However, in the next month the measure stalled and in the following months, the gauge reversed to the downside to end up at 0.5% y/y in May, casting doubts on the effectiveness of the BoJ’s policy to drive inflation towards its target. In contrast, average earnings printed the fastest growth in almost four years in March, but April’s reversal proved that the pickup was temporary and not sustainable to boost consumer prices, despite the unemployment rate standing at its lowest since 1993. Moreover, household spending contracted in April for the third consecutive month, while updated GDP growth estimates for the first quarter confirmed a contraction of 0.6% y/y as analysts initially predicted, both flagging that inflation will take longer to reach its goal and therefore a rate hike could move further back in time. 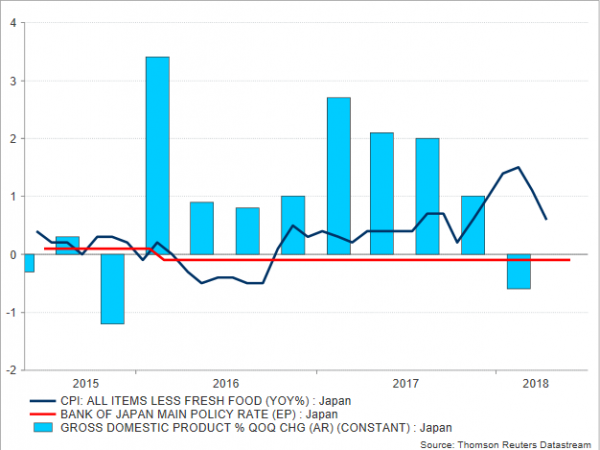 Note that during April’s gathering, the BoJ abandoned its target date of achieving its inflation target by fiscal 2019. The move gives more flexibility to policymakers to avoid pressures for more stimulus in case this deadline, which has been postponed six times since 2013, fails to hold, while at the same time, in the absence of such expectations, the market reaction could be more subdued in the wake of any announcements on inflation. Nevertheless, BoJ Governor Kuroda did not abandon his hopes for inflation touching 2.0% by 2019 as expressed by his comments at the University of Zurich on Monday. Note that the central bank is not scheduled to renew its economic forecasts at this meeting, hence all eyes will turn to the press conference following the rate decision for any clarifications on how policymakers assess the country’s economic outlook.

Turning to forex markets, dollar/yen is heading for a weekly gain, as confidence in the US economy continues to grow. A dovish BoJ for example, which would probably focus on Japan’s recent poor economic releases, could bode well for the greenback, sending the pair up to yesterday’s high of 110.84 before the 111 round level comes into view. Any break above the latter could then retest the previous peak of 111.39, while steeper increases could also open the way towards the 112 psychological mark.

On the other hand, if policymakers use a more optimistic tone instead, expressing confidence in inflation resuming its uptrend, then dollar/yen could reverse to the downside to meet the 110 round level again. Slightly lower, the 23.6% Fibonacci of 109.20 of the upleg from 104.05 to 111.34 could also provide support ahead of the 50-day (simple) moving average at 109.11.