The Greenback weakened against the European Single Currency, following the Advance GDP data release. The EUR/USD currency pair gained 11 pips, or 0.09%, to continue fluctuating in the 1.1635 area.

The Bureau of Economic Analysis released Gross Domestic Product data that came lower-than-expected of 4.1%, compared with the forecasted 4.2% but better than previous periods.

The US President Donald Trump said: “Somebody actually predicted today 5.3 [percent growth]. I don’t think that’s going to happen…if it has a 4 in front of it, we’re happy. If it has like a 3, but it’s a 3.8, 3.9, 3.7, we’re OK. These are unthinkable numbers. If I would have used these numbers during the campaign, the fake news back there would’ve said he’s exaggerating.” 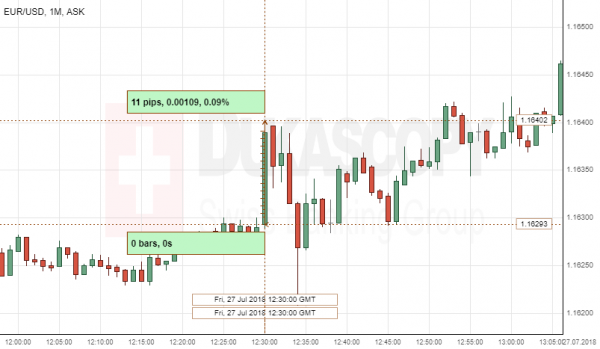 DOW drawing support from 28000 after gap down, 10-year yield in free fall