The Reserve Bank of New Zealand (RBNZ) is widely anticipated to keep interest rates unchanged when it announces its rate decision on Wednesday at 2100 GMT. Given mixed developments lately, officials are unlikely to alter their message from the latest policy meeting that a rate cut remains on the table, something that could keep the kiwi near current low levels moving forward.

The RBNZ took a dovish turn the last time it met back in June. Policymakers noted they are well positioned to manage an interest rate change in either direction if necessary, up or down, implicitly signaling that a rate cut remains an option should downside risks materialize. This shift in language was prompted by a slowdown in economic growth in Q1, smaller fiscal stimulus than projected, declining business confidence, and a rather uncertain outlook for exports amid global trade tensions. 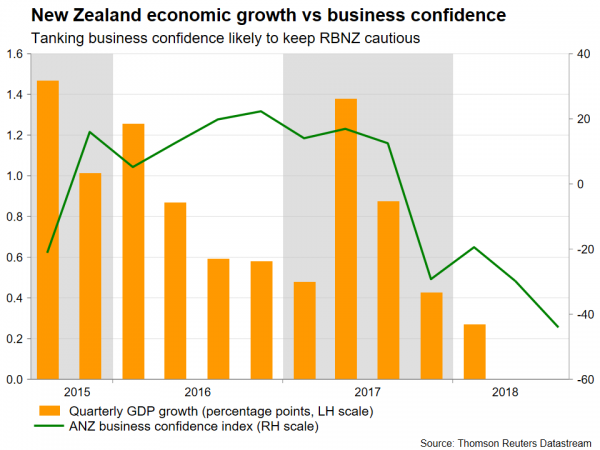 Since then, developments have been mixed, providing little motivation for officials to alter their otherwise neutral message that policy can respond in both directions. On the bright side, underlying inflation picked up some steam in Q2, as did wage growth, which suggests that price pressures are gradually building. That said, both core inflation and wages still remain far below healthy levels, implying the RBNZ is unlikely to act on such small improvements. Meanwhile, business confidence as gauged by the ANZ index has continued to deteriorate, generating concerns it may become self-fulfilling and lead to a slowdown in hiring and/or investment. Moreover, trade tensions have continued to escalate, magnifying the downside risks for New Zealand’s export-heavy economy.

Overall, the RBNZ will probably stick to its guns that policy will remain reactive to any developments, and that the base-case scenario is for rates to start rising only towards the end of 2019 – as indicated by the Bank’s own interest rate forecasts. The risk to that, is the Bank pushing even further back the timing of the first anticipated rate hike. This suggests that the risks surrounding the kiwi from this meeting may be tilted to the downside, should the RBNZ further dampen expectations for any hike in the foreseeable future.

Taking a technical look at kiwi/dollar, immediate support to declines may be found around 0.6710, the July 19 low, before the focus turns to the two-year low of 0.6686. A downside break from there could see scope for extensions towards the 0.6575 zone, a trough last seen on March 16, 2016.

On the upside, initial resistance to advances may come near the 0.6760 area, defined by the inside swing low on July 27. Further bullish moves could see scope for the 0.6850 level, marked by the peak of July 26, with even steeper advances aiming for the June 25 high of 0.6920.

Lastly, note that ahead of the rate announcement, on Wednesday at 0300 GMT, the RBNZ will release its own 2-year inflation expectations index. This is a crucial data point for the Bank that acts as a forward indicator of price pressures. So crucial, that a tumble in this rate was enough to trigger a surprise rate cut back in early 2016. Hence, any notable move in this measure could impact price action in kiwi/dollar even ahead of the actual rate decision.