The US will release its Consumer Price Index (CPI) data for July on Friday, at 1230 GMT. Forecasts point to another mild, energy-driven acceleration in consumer prices. While such prints could prove positive for the dollar on the margin, for the currency to clearly resume its uptrend, it may require an upside surprise in inflation that stokes expectations for two more Fed hikes this year.

The Fed provided few fresh signals when it kept interest rates unchanged last week, upgrading its assessment of economic growth and keeping another rate increase at the next meeting in September firmly on the table. Indeed, investors appear all but certain rates will be raised by 25bps in September, with the implied probability for such an action resting at 92.5% according to Fed funds futures. That said, they are less confident regarding moves after that, with another hike in December factored in with a 64% probability. This implies the dollar could still see some upside in case of strong data releases that enhance the prospect of a December action. 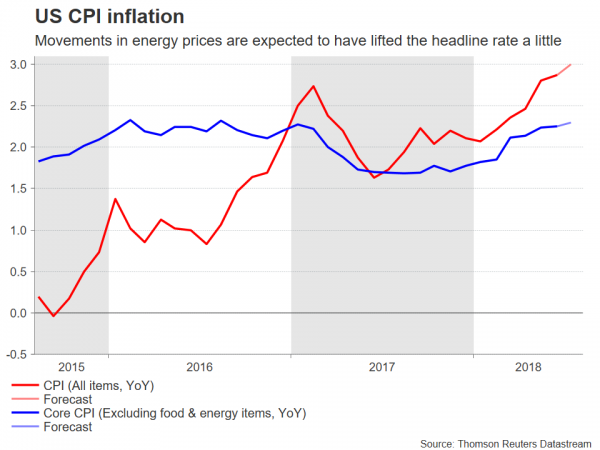 Turning to this week’s inflation data, in July, the US CPI rate is forecast to have ticked up for the sixth consecutive month to reach 3.0% in yearly terms, from 2.9% previously, and matching its highest since December 2011. The core rate – which excludes volatile food and energy items – is projected to have held steady at 2.3%, which suggests that the anticipated uptick in the headline rate may be largely owed to movements in oil prices.

The forecasts are supported by the US Markit manufacturing and services PMIs for July. The former showed manufacturers raised their selling prices at the fastest pace since 2011, while the latter showed the rate of inflation accelerating to its quickest since 2014. In isolation, these may suggest that an upside surprise in the CPI figures may be slightly more likely than a downside one. That said though, note that roughly one third of the CPI basket is the “shelter” component, which measures how fast rent prices are rising. Hence, any potential weakness in rents could keep the CPI down even in case of a notable rise in goods and services inflation. This is among the chief reasons why the Fed prefers the core PCE price index as its main inflation gauge.

In case of stronger-than-anticipated figures, the dollar could benefit on rising speculation for a December Fed hike. Technically, looking at dollar/yen, immediate resistance to advances may be found near the pair’s 100-period moving average on the 4-hour chart, currently located at 111.54. An upside break could open the way for the 112.15 zone, defined by the August 1 peaks, before the 7-month high of 113.16 comes into view.

On the downside, in case a disappointment in these figures plays down expectations for two more rate increases this year, initial support to declines may come around the 110.60 area, marked by the July 26 low. Even lower, the round figure of 110.00 – which may hold psychological importance – may attract attention, with even steeper bearish extensions aiming for the 109.35 handle, the June 25 trough.