FOREX: Sterling managed to rebound against the US dollar on Thursday, after it touched its lowest level in almost a year (+0.08%) on the back of growing worries of a no-deal Brexit, while euro/pound fell by 0.15%, dropping back below the 11-month high it posted earlier and the 0.90 handle. The rise in the pound occurred after a report stated that EU members are considering a Brexit deal that would allow the UK to remain in the single market for goods. Dollar/yen edged higher by 0.15% after two consecutive red days, ticking above 111.00. Euro/dollar slipped below the 1.1600 handle (-0.08%) but remained within the narrow range of 1.1530 – 1.1750 recorded the last two months. The RBNZ policy meeting drove kiwi/dollar significantly lower, by 1.39%, after the Bank surprised markets by committing to hold rates at record lows until the end of 2020. Aussie/dollar slipped by 0.15% at 0.7420, while dollar/loonie remained near its opening level. Meanwhile, dollar/lira completed a new record high (+2.52%) after a Turkish delegation met US officials to try to resolve disputes between the two NATO allies, but the meeting did not produce any breakthrough.

STOCKS: Most of the European stocks dropped on Thursday amid a deepening of the US-China dispute. The benchmark European STOXX 600 declined by 0.06%, while the blue-chip Euro STOXX 50 was down by 0.24% at 1040 GMT. The German DAX 30 rose by 0.42%, with retailer Adidas (+8.16%) leading the gains after an upbeat Q2 earnings report, whereas the British FTSE 100 was on a strong sell-off today (-0.61%), dragged by telecommunications and energy. The French CAC 40 dived by 0.16% and the Spanish IBEX 35 inched down by 0.02%. Turning to the US, futures tracking the Dow Jones, S&P 500, and Nasdaq 100 were all in positive territory, pointing to a higher open today.

COMMODITIES: Oil prices hovered slightly above yesterday’s lows after renewed US sanctions against Iran took effect on Wednesday and China announced that it will impose a 25% tariff on additional $16 billion worth of US imports, ranging from fuel and steel products to autos and medical equipment. WTI crude oil was trading at $66.90 (-0.03%) near the 7-week low of $66.32, while Brent was moving around $72.34 (+0.08%), marginally above the three-week trough of $71.65. In precious metals, gold prices were up at $1,214.6 (+0.09%). 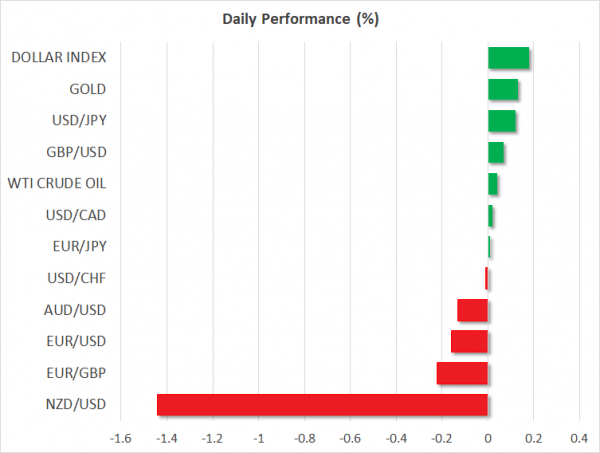 The US calendar will be featuring initial jobless claims and producer prices later on Thursday at 1230 GMT, with analysts expecting the number of people applying for unemployment benefits for the first time to have risen by 220k in the week ending August 4 compared to 218k in the preceding week, while regarding PPI figures for the month of July they estimate a growth of 3.4% y/y, the same as in June. Excluding volatile food and energy items, PPI growth is projected to remain unchanged at 2.8% y/y. Given that producer prices are another measure for inflation, the dollar could move higher in the wake of an upward surprise and vice versa as investors could see the gauge as a precursor for tomorrow’s CPI figures.

Potential trade developments during the day will be of importance to the greenback as well as the US-Sino dispute continues to escalate, with China announcing a 25% import tariff on an additional $16 billion worth of US products late on Wednesday, in retaliation to earlier actions of the same nature by Washington.

US-Japanese trade relations will be also in focus later today as the Japanese Prime Minister, Shinzo Abe, and the US President, Donald Trump, will be meeting in Washington. Talks will likely revolve around US threats of an up to 25% import tariff on cars and auto parts, a key export product for Japan, with the US pushing to further open the Japanese market to American companies. The US Trade Representative, Robert Lighthizer, and Japan’s Economy Minister, Toshimitsu Motegi, will also be holding discussions today.

Meanwhile in Japan, attention will turn to flash GDP growth numbers for the second quarter, due out at 2350 GMT. According to analysts, the economy is expected to return to positive growth in the three months to June after printing a negative mark in the first quarter. The annualized GDP growth rate is estimated to rebound from -0.6% to +1.4%, while on a quarterly basis, economic activity is anticipated to rise from -0.2% to +0.3%. In case of a data beat, the yen could gain further ground against the dollar. Readings on consumption and capital expenditure delivered along with GDP growth stats could enhance the yen’s rally if the numbers prove better-than-expected. In the previous quarter, consumption declined by 0.1% q/q and capital expenditure increased by 0.3% q/q. Forecasts now call for a rise of 0.2% and 0.6% correspondingly.

At 0130 GMT, the Reserve Bank of Australia will be releasing its quarterly statement on monetary policy. Across the Tasman Sea and in New Zealand, the Reserve Bank today decided to leave its borrowing costs unchanged but brought a fresh downside to the kiwi after it said that rates could remain at record lows for another two years, longer than they projected in the past. July’s business PMIs and electronic card retail sales will be the next to move the kiwi at 2330 GMT and 2345 GMT respectively.

Elsewhere, housing starts for July will be under review in Canada at 1215 GMT. 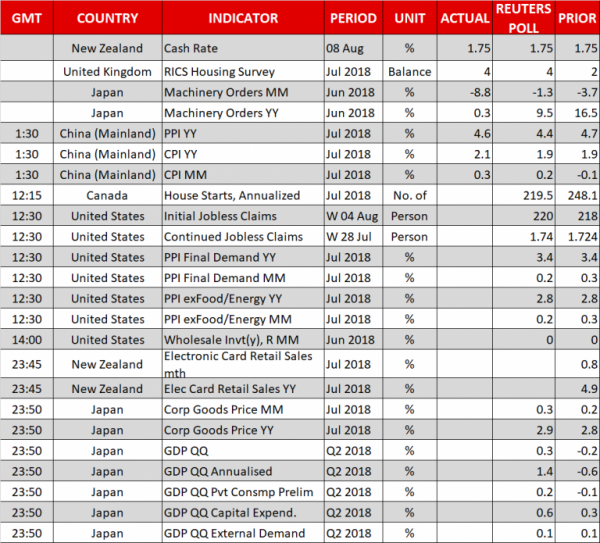