Soft US growth to pressure Fed ahead of Jobs report

The US dollar is mixed against majors with gains against the NZD, JPY, CAD and AUD but weaker against the EUR and GBP. Risk appetite in Europe returned after the restful of the first round of elections in France left Macron and LePen heading into the May 7 deciding second round. The Trump administration presented its tax reform plan and launched a more aggressive trade offensive against NAFTA but anxiety around the dollar surged with the first release of the US GDP in the first quarter coming in below expectations at 0.7 percent.

US employment data will key alongside the May monetary policy meeting of the Fed. The ADP private payroll data will be published on Wednesday, May 3 at 8:15 am EDT. Job creation in the private sector has beat expectations since January, but the market has a conservative estimate of under 200,000. The Federal Open Market Committee (FOMC) will release the statement of the monetary policy meeting at 2:00 pm with no change expected to the rates. The meeting is not scheduled to have a press conference which will put more emphasis on the written statement as analysts and investors look for insights into the Fed’s next steps.

The U.S. non farm payrolls (NFP) will be released on Friday, May 5 at 8:30 am EDT. Last month the jobs report was well below expectations with a gain of 98,000 when 170,000 were expected. US employment has been the strongest pillar in the recovery but it has hit some bumps of late. The U.S. Federal Reserve will look at the wage growth component for signs of inflation as they ponder the number of rate hikes this year. The unemployment rate is expected to head higher to 4.6 percent as more people look to rejoin the workforce. 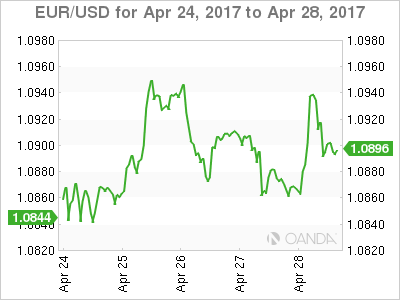 The EUR/USD gained 1.89 in the last five days. The single pair is trading at 1.0902 in a week that started with the results of the French election boosting the EUR and will end with soft economic indicators in the US putting downward pressure on the dollar. The European Central Bank (ECB) kept rates and the stimulus program unchanged, but it managed to make optimistic comments about the economy on Thursday. On Friday that belief was verified with inflation gains of 1.9 percent in the eurozone with the core component rising 1.2 percent and improvements to the Spanish GDP and Italian inflation.

The European commission will publish its Economic Forecast on Monday, May 1 at 5:00 am EDT. Purchasing manager indexes will be published in the Eurozone next week data with Germany and France drawing the most attention on Tuesday, May 2 starting at 3:15 am EDT. German unemployment will be the highlight of Wednesday’s economic releases in the EU sharing the spotlight with the flash GDP for the Euro zone at 5:00 am EDT.

The economic calendar is packed in the United States. It starts on Monday, May 1 with US Treasury Secretary Steven Mnuchin giving a speech along with the release of the US purchasing managers index (PMI). Kicking off the jobs data will be the ADP payroll report on Wednesday, May 3. The U.S. non farm payrolls (NFP) will close the week on Friday, May 5. Doubts are growing about the state of the US economy after the weaker GDP number prompting investors to look even more closely at the most important indicator in the market. 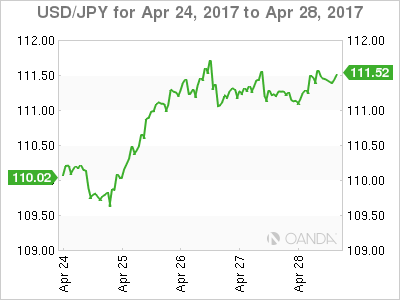 The USD/JPY gained 1.998 in the last five days. The pair is trading at 111.39 near weekly highs of 111.78. The Yen started depreciating after the results of the French election reduced the risk aversion that had made the currency a safe haven. The Trump administration in the US also presented the outline of the much-awaited tax reform plan which boosted the dollar. The Bank of Japan (BOJ) was active on Thursday but by keeping rates and the stimulus package unchanged sent a dovish signal to the market.

The economic calendar in Japan will be light as there are three bank holidays next week. 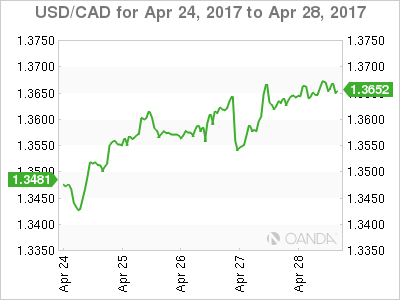 The USD/CAD gained 1.192 percent in the weekly trading session. The pair is trading at 1.3666 after the US dollar resurged after the positive results of the first round the French election. The Canadian dollar touched daily and weekly lows after the Trump administration retracted on comments it was working on an executive order to pull out of NAFTA. Trump said that after talking to the president and prime minister of Mexico and Canada he decided to give the renegotiation route a shot.

US employment data will dominate the economic calendar during the week but there are important Canadian indicators on the agenda. The trade balance will be published on Thursday, May 4 and Canadian employment data will share the day and time of release with the U.S. non farm payrolls (NFP) on Friday, May 5 at 8:30 am. After the impressive 19,400 jobs added last month the forecast calls for a 20,000 gain keeping the unemployment rate unchanged at 6.7 percent. The Canadian purchasing managers index will be released later the same day at 10:00 am with a slight improvement to 62.3 anticipated after a 61.1 figure last month. A reading above 50 in the survey implies expansion of Canadian purchasing orders.