FOREX: The dollar’s index against a basket of currencies remained higher on the day, though only slightly so, consolidating for the most part last week’s notable declines which largely came on the back of Trump’s Fed-hiking criticism and Fed chief Powell’s perceived-dovish message at Jackson Hole on Friday. Dollar/yen was 0.1% lower, trading roughly 40 pips below Friday’s three-week high of 111.48. Euro/dollar was marginally down. The pair pared some of its earlier losses following better-than-anticipated Ifo survey data on German business sentiment earlier in the day. It is also of note that it touched a near four-week high of 1.1654 during today’s Asian session. Sterling was little changed versus the greenback and the euro, having earlier recorded a near one-year low of 0.9059 pounds against the latter; the prospect of a no-deal Brexit continues to weigh on the currency. Elsewhere, dollar/peso is 0.4% down on the back of seemingly growing prospects for a NAFTA deal between the US and Mexico soon. Such an outcome is likely to bring the loonie in focus as well.

STOCKS: Barring Italian equities – the FTSE MIB was down by 0.7% on Italian budget-angst –, European stocks were broadly in the green at 1123 GMT, buoyed by bullish sentiment on Wall Street on Friday and today’s positive closes in Asia. These in turn were helped by what was seen as a stocks-supportive speech by Powell on Friday and speculation for a US-Mexico NAFTA deal. The pan-European Stoxx 600 was up by 0.2% and the blue-chip Euro Stoxx 50 traded higher by 0.3%. The German Dax and the French CAC 40 were up by 0.5% and 0.4% correspondingly. German automakers BMW, Volkswagen and Daimler, which suffered in the past on the back of tariff-fears, were boosted by the seemingly positive momentum on the NAFTA front and all made the list of top Dax performers; their gains ranged from 1.85% to 1.1%. Meanwhile, UK equity markets are closed for a holiday today. Constracts on the Dow, S&P 500 and Nasdaq 100 were all pointing to a higher open. The S&P and Nasdaq Composite closed at record highs on Friday, with the Nasdaq 100 also coming within breathing distance of its all-time peak.

COMMODITIES: WTI was down by 0.35% at $68.47 per barrel. The benchmark managed to advance for the first time on a weekly basis in roughly two months last week. In the meantime, Brent crude was 0.3% lower, at $75.49/barrel. In precious metals, dollar-denominated gold was 0.1% lower at around $1.204 per ounce; in the previous week it was supported on the back of broad dollar weakness, moving above its lowest since January 2017 of $1,159.96 hit the week before. 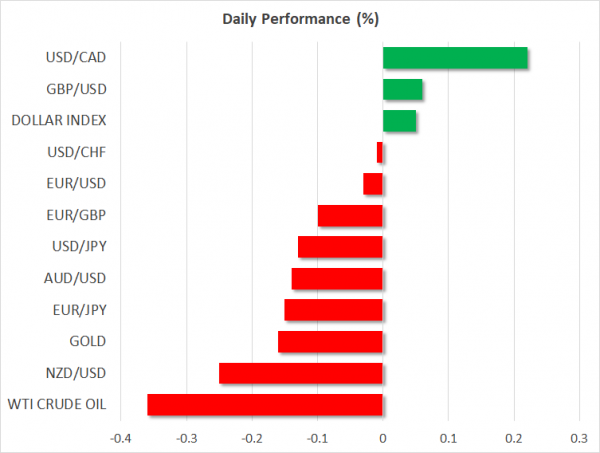 Day ahead: US-Mexico NAFTA deal to be announced today?

The remainder of Monday’s calendar is empty of important releases, with the focus in terms of non-calendar events perhaps falling on NAFTA developments and the potential for a deal between the US and the Mexico being sealed soon.

People familiar with the NAFTA discussions are suggesting that a deal may come as soon as later today. The Mexican peso is up on the day on the back of growing speculation for an agreement, while the loonie is likely to post a relief rally in case Canada is invited back to the discussions should a bilateral agreement between the US and Mexico indeed materialize.