Happy New… whatever. 2019 kicked off with a fizzle as a partial U.S. government shutdown that began in the old year limped into the new. President Trump and Congress are at a stalemate over discretionary funding for 25% of the Federal government, and a border wall with Mexico. The standoff meant a not-so-happy start to the New Year for over 800,000 federal employees who have been furloughed, or if considered “essential”, had to work without pay.

Set to enter its third week, the shutdown is expected to negatively impact consumer spending and business activity. Assuming it ends soon, it is projected to lower first quarter GDP growth by 0.1 percentage points. Once resolved, federal employees will receive back pay, (though workers on contract will not), and this should boost economic activity in the second quarter. The question that remains is how long it will last. The longest government shutdown was for 21 days in 1995 (Chart 1), but workers and businesses who depend on their spending, are hopeful that such a scenario will not be repeated.

The stock market also rang in the New Year noticeably lower. Sentiment had been dragged down by a confluence of factors ranging from slowing global growth and uncertainty over the Fed’s policy path to simmering trade tensions between the U.S. and China. A weaker-than-expected reading for December’s ISM manufacturing index on top of an outright contraction in China’s manufacturing activity, further fueled fears through the middle of the week. Though still technically in growth territory, the U.S. ISM index posted the slowest pace of expansion since November 2016, reflecting concerns of less robust demand and trade worries. The Trump administration has negotiated truces with multiple trading partners, however, many of these are set to expire in short order. Unless a long-term agreement can be reached, businesses may face renewed trade uncertainty as the year unfolds.

By the end of the week, a nod to “patience” by Fed Chair Powell and a strong December jobs report helped pull equity markets back into positive territory. Non-farm payrolls exceeded expectations, adding 312K jobs in December. This resulted in 99 straight months of expanding payrolls – the longest stretch on record. Even the uptick in the unemployment rate to 3.9% resulted from a labor force rising participation rate. Such dynamics suggest that even amid the tightest labor market in decades, the U.S. economy is still able to pull workers off the sideline and into the job mix. Wages also surprised to the upside, growing by 3.2% year-on-year (Chart 2) – the best full-year gain since 2008.

The employment data should serve to calm concerns that the American economy is quickly running out of steam. While growth in 2019 is projected to be lower, we still expect it to remain above the economy’s trend pace. All in all, government showdowns aside, consumers remain on firm footing, supported by the most favorable labor market in decades. 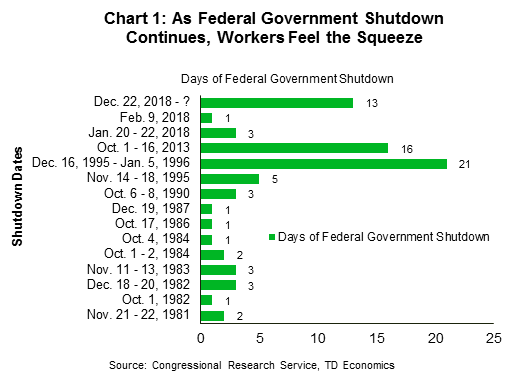 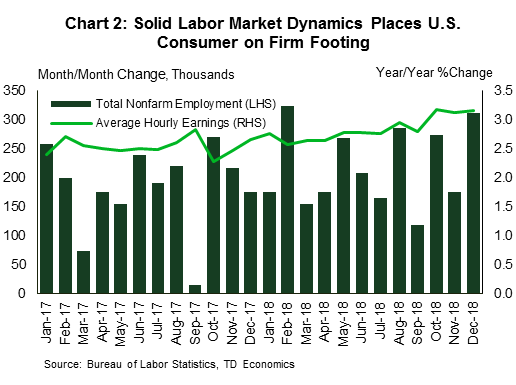 The last two weeks were relatively quiet on the Canadian economic data front. Today’s labour force survey report was the highlight this week, but proved largely immaterial from a policymaker’s standpoint. Financial and commodity price movements, however, remained the centre of attention again given the ongoing global risk-off sentiment amidst fears of a global economic slowdown.

Following November’s blockbuster jobs report, December’s less stellar report does not change the Canadian labour market narrative. Employment gains were modest at 9.3k, largely in line with consensus expectations. This was accompanied by an almost equal change in labour force growth (+9.6k) that together acted to hold the unemployment rate at a historically-low 5.6% (Chart 1).

The details of the report were less encouraging. Part-time jobs (+28.3k) drove the headline gain, with full-time employment falling on the month (-18.9k). Furthermore, job gains were concentrated in the self-employment category (+46.4k), the most volatile class of worker in the labour force survey. Still, these compositional changes are likely more noise than signal.

Combined with a moderation in other indicators and a struggling energy sector, the economic picture suggests that higher interest rates are not urgently needed. Indeed, odds of an upcoming rate hike for the next three Bank of Canada meetings as implied by the OIS curve have steadily declined since October. In fact, expectations of a rate hike by January have fallen to zero from roughly 80% in October, although ongoing global risk-off sentiment has likely contributed in part to this sudden re-pricing (Chart 2).

Following a December which saw markets mostly in the red, performance was slightly more positive this week, with the energy-heavy S&P/TSX composite posting a modest gain relative to last week at the time of writing. Just as encouraging was the strong run up in oil prices this week after dipping to lows not seen in more than a year. The WTI benchmark is up roughly 6%, and Brent crude is up an even more impressive 9%. Data suggesting Saudi output declines ahead of the OPEC+ cut implementation schedule contributed to the recent oil price rally. That said, prices are likely to remain volatile as markets weigh output cuts against evidence of slowing global growth.

In the meantime, higher world oil prices are a welcome development for Canada’s ailing oil patch. Since early December, Alberta’s output curtailment plan has sent heavy oil prices surging, narrowing the WCS benchmark’s spread to WTI to below US$15. 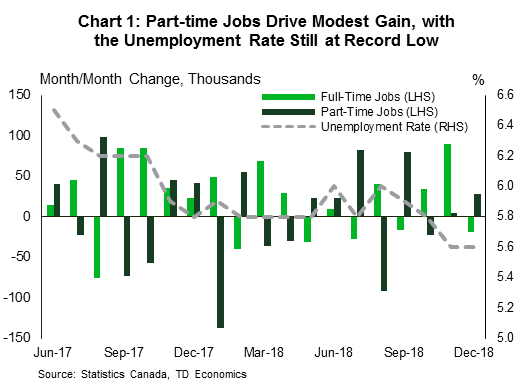 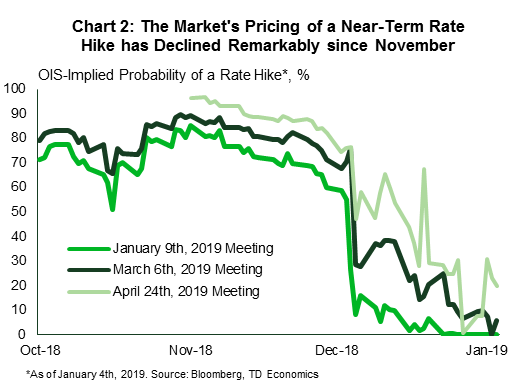 We expect another sharp retreat in oil prices to be reflected on a significant 8.4% m/m decline in the CPI’s fuels category, more than offsetting an expected increase in food prices at 0.2% m/m. The notable decline in energy prices should have dragged down headline CPI inflation to a negative 0.1% m/m print for December, which should also be reflected on a softer 1.9% annual increase. On the back of another steady rise in its core services segment, we anticipate core CPI prices to have registered their third consecutive 0.2% m/m increase, maintaining annual core CPI inflation stable at 2.2%. Looking ahead, we expect headline CPI inflation to gradually rebound to above-2% levels as oil prices stabilize and core CPI inflation maintains its recent steady pace. 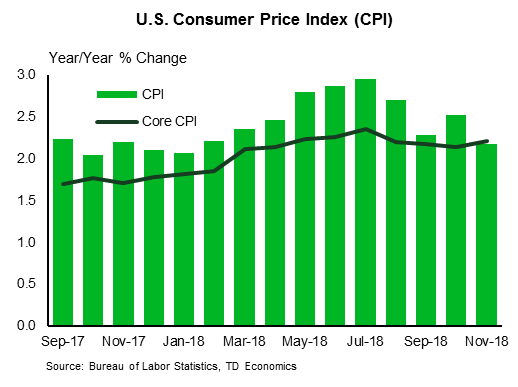 TD looks for the international trade deficit to widen to $2.8bn in November on another outsized decline in energy exports, as a sharp pullback in crude oil prices is compounded by voluntary shut-ins throughout the oil sands. Motor vehicle exports unwind part of the 6% gain in October, contributing to a wider deficit, while nominal imports should see little change after posting four declines in the last five months. Aircraft imports have scope to recover on higher deliveries to Canadian airlines while imports of machinery & equipment will be closely watched as a barometer for a rebound for Q4 investment. The real trade balance is expected to post a more modest deterioration on lower commodity prices, allowing real exports to outperform the nominal decline, although the external sector should still be a drag on growth. 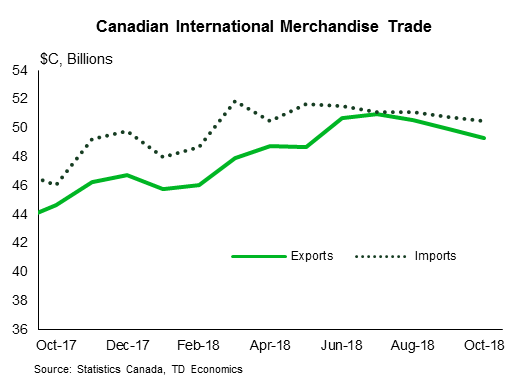 Housing starts are forecast to slow to an annualized 205k in December. Weaker multi-unit construction in Toronto and Vancouver should provide the main catalyst following outsized gains the prior month, while single family construction should see little change. This will leave housing starts to tally roughly 213k for the year as a whole, only slightly below the 220k units created in 2017. However, our forecast is consistent with only 55k single-unit starts in urban areas, which is only slightly above the worst year on record from 1982. 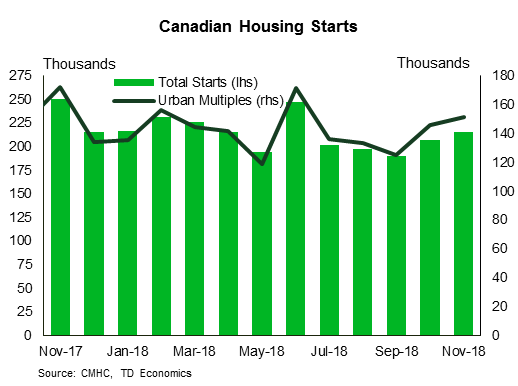 We expect the Bank of Canada to hold the overnight rate steady at 1.75% next week, which is already fully priced into markets. The Bank will have to acknowledge recent developments in the energy sector and financial markets, but will try to strike a somewhat balanced tone as the longer term forecast is largely intact; we expect modest downward revisions to growth for 2019 (approximately 0.2 p.p.), but the 2020 growth estimate should be stable. Risks around international trade tensions and/or global growth may take a more prominent position in the hierarchy of risks, but we nonetheless look for Poloz to reiterate that the policy rate will need to move back to the neutral range while maintaining the BoC’s data dependence. 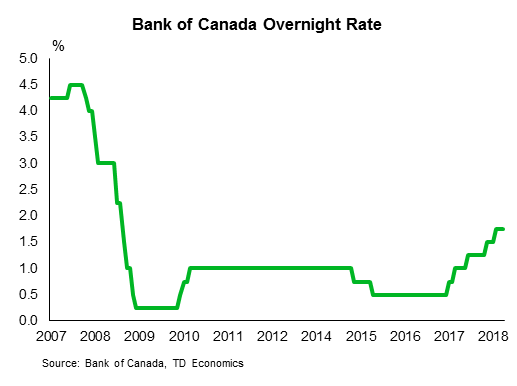