The US dollar had a tough first week of 2019. The greenback is lower against most major pairs as market optimism of two rate hikes from the U.S. Federal Reserve have virtually evaporated. Mixed economic indicators and a neutral to dovish Fed Chair Powell put downward pressure on the USD. Inflation data will be released on Friday, January 11 with investors also keeping an eye on trade negotiations improving between China and the US. The Bank of Canada (BoC) will publish its rate statement on Wednesday, January 9. The central bank is expected to keep rates unchanged amid global growth uncertainty, but is still expected to hike once in the first quarter of 2019 if Canadian inflationary pressures keep up.

The USD/CAD lost 1.79 percent in the last five trading days. The pair is trading at 1.3393 after the release of the U.S. non farm payrolls (NFP) showed a solid 312,000 jobs gain and a better than expected 0.4 percent growth in wages. Traders awaited for Fed Chair Jerome Powell’s speech in Atlanta which stopped the momentum of the US dollar. In December market estimates had 2 to 3 rate hikes in 2019, but after a stock market sell off that continued into early January the expectations changed radically where even a rate cut would not be out of the question. Powell’s words on Friday once again stuck to the central bank’s data dependency, but the non committal language was received as a strong signal that the Fed is ready to pause its monetary policy tightening for the time being. 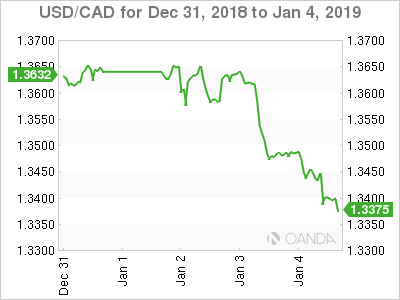 Canadian jobs data continues to impress with a 9,300 new positions added in December. Following a massive 94,100 gain in November the estimates were lower as some headwinds were beginning to affect the economy. The BoC is expected to hold rates at 1.75 percent as the trade dispute between the US and China continues. Governor Poloz has said that he doesn’t expect a recession in 2019, but lower wage growth and global geopolitics could have the BoC emulate the Fed and pause its tightening of monetary policy.

Stock markets were encouraged by US indicators pointing to a positive growth US picture, and the way Powell delivered his remarks kept the US dollar from rising. Emerging markets and other riskier assets benefited with Wall Street breathing a sigh of relief after a tough start to the year.

Oil Rises Boosted by US Jobs and Energy Production Slowdown

Oil prices rose 2.60 percent on Friday after concerns around global growth diminished after a strong US jobs report and news out of China regarding US-China negotiations combined with the first signs Saudi Arabia is reducing its crude production. Higher energy demand expectations rose as US negotiators will meet with their Chinese counterparts as the Saudis begin cutting their production as per the agreement with major suppliers in an effort to stabilize crude prices. 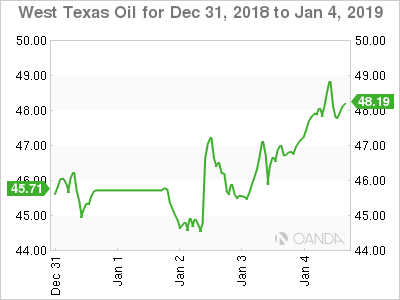 The Organization of the Petroleum Exporting Countries (OPEC) and other major producers agreed to cut supply by 1.2 million last year with Saudi Arabia taking the lead with early cuts, with others expected to join in January. If the US and China can find a middle ground to stop tariff escalation this week as OPEC compliance starts rolling in the outlook for oil prices will improve after a difficult 2018 and the fate of the organization itself will be on more solid ground after the fall in energy prices threatened to break the group apart.

Gold lost 0.66 percent on Friday but given the volatility of the trading week will end up in the black for the first week of 2019. With US representatives on their way to China to restart trade talks and US jobs once again boosting global growth expectations the yellow metal was sold as investors looked for riskier assets. 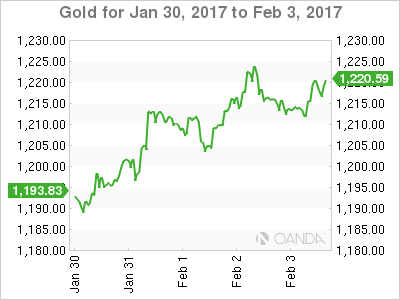 Fed Chair Powells words reassured markets as he will not step down despite pressure from the Trump administration. The neutral comments on monetary policy, but the optimism on the economy boosted markets. The release of the minutes form the Fed’s December meeting where the central bank hiked interest rates by 25 basis points could reignite the forecasts of 2 rate hikes this year, despite the turbulence felt in the last four weeks.