The USD weakened against a number of its counterparts yesterday as Fed officials expressed their concern for the Fed’s rate hike path. Specifically Atlanta Fed President Raphael Bostic, added to the Fed’s dovish tone as he stated that the Fed may have to hike rates only once this year. According to some analysts, part of the market expects there to be no rate hikes at all this year, while some analysts seem to prepare for a possible rate cut. Analysts also point out that the Fed seems to be listening to the market and that inflation figures may provide room for a pause in its rate hike cycle. On other news, US Commerce Secretary Wilbur Ross stated that the US and China could reach a trade deal that “we could live with”, boosting optimism for a possible trade deal in the near future. We see the case for volatility to be maintained for the USD over the short term. EUR/USD rose yesterday breaking the 1.1465 (R1) resistance line, however corrected lower during today’s Asian session. Should the bearish sentiment for the USD continue to wander over the markets, we could see the pair rising even further. Should the pair find new buying orders along its path, we could see the pair rising, breaking the 1.1465 (R1) resistance line and aim for the 1.1500 (R2) resistance level. Should on the other hand, the pair come under the selling interest of the market, we could see it breaking the 1.1425 (S1) support line and aim for the 1.1385 (S2) support level.

The sterling rose against the USD yesterday reaching a one week high, as the market prepares for the Brexit debate in the UK parliament. Analysts expect there to be increased volatility over GBP pairs for the next two weeks. The debate is to start tomorrow and the parliament’s vote is expected to be held on Tuesday the 15th of January. Theresa May is currently expected to lose the vote as members of the Conservative party along with the DUP seem determined to vote against Theresa May’s Brexit plan. Analysts point out that the parliament vote is expected to be carried out this time, however also stress the possibility of the Brexit date to be delayed. We see the case for the increased political uncertainty to keep the pound on a general downtrend over the next days. GBP/USD posted some gains yesterday, however corrected a bit lower during the Asian session and stayed below the 1.2795 (R1) resistance line during the whole session yesterday. We could see the pair rising once again today, however cable could prove sensitive to any Brexit headlines. Should the bulls dictate the pair’s direction, we could see the pair breaking the 1.2795 (R1) resistance line and aim for the 1.2880 (R2) resistance hurdle. If the bears take over, we could see the pair breaking the 1.2700 (S1) support line and aim for lower grounds.

In today’s other economic highlights: 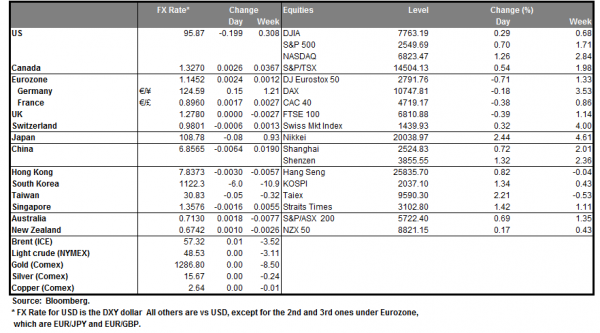