The USD remained relatively stable against a number of its counterparts yesterday, despite concerns for global growth growing. Just ahead of the Davos meeting starting today, the IMF issued a warning about global growth, as it forecasts a wider than expected slowdown for the Chinese economy and the Eurozone. IMF managing director Christine Lagarde, stated that after two years of solid growth the world economy is growing more slowly than expected and risks are rising. Never the less, she refused that a possible recession is just around the corner, however underscored the risks of a sharper decline. On other news, a survey contacted by auditing giant PWC, among 1400 chief executives found that 29 percent expect growth to decline over the next 12 months, which is the highest percentage since 2012. Rising risks could provide support for safe haven currencies in the near future and some volatility could emerge, stemming from the Davos meeting over the next few days. EUR/USD maintained a sideways motion yesterday, near the 1.1350 (S1) support line, without breaking it. Technically it should be noted that the pair’s price action is on the brink of clearly breaking the downward trendline incepted since the 10th of the month. Should the pair clearly break the prementioned trendline we will switch our view of a bearish outlook in favor of a sideways motion. It should be noted that today’s financial releases could cause the pair to drop, as they could weaken the EUR side. Should the pair’s long positions be favored by the market, we could see the pair, breaking the 1.1387 (R1) resistance line. Should on the other hand, the pair come under the selling interest of the market once again, we could see it breaking the 1.1350 (S1) support line and aim if not break the 1.1305 (S2) support level.

Tomorrow Wednesday during the Asian session, BoJ will be announcing its interest rate decision and is widely expected to remain on hold at -0.10%. Currently JPY OIS imply a probability for the bank to remain on hold of 96.09%, strengthening arguments for such a scenario. We could see the market’s attention turn to the accompanying statement, as well as the press conference of governor Kuroda which is to follow later on. After the recent deceleration of the CPI rate for December and the GDP growth rate in the negatives, it may prove difficult for the bank to avoid a more dovish tone. Analysts point out that the slowing global economy and depressed oil prices could force the BoJ to revise down its outlook for economic growth and inflation. Should the bank choose to adopt a more dovish tone either in the accompanying statement or the following press conference we could see the JPY weakening as a result. USD/JPY also maintained rather stable, maintaining a sideways motion between the 109.20 (S1) support line and the 110.15 (R1) resistance level. We could see the market starting to position itself ahead of the BoJ interest rate decision and should the market sentiment be towards a weakening JPY, we could see the pair starting to rise slowly. Should the bulls take over the pair’s direction, we could see it breaking the 110.15 (R1) resistance line and aim for the 111.40 (R2) resistance hurdle. Should on the other hand should the pair come under the control of the bears, we could see it dropping, breaking the 109.20 (S1) support line and aim for the 108.25 (S2) support barrier. 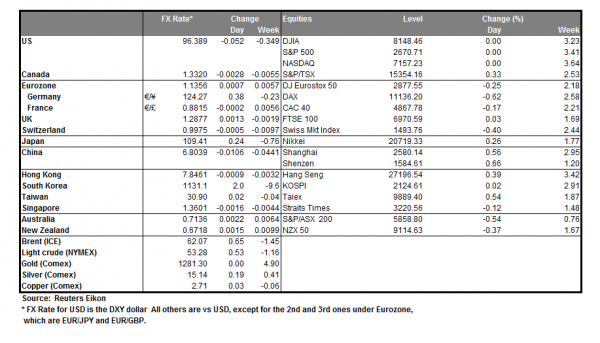