The Fed is widely expected to keep policy unchanged when it announces its decision on Wednesday, at 1900 GMT. Even though there won’t be any updated forecasts this time, Chair Powell will hold a press conference after the event, and any market reaction will likely come from his remarks. In light of rate hikes being “on pause” for now, markets will focus on whether the Fed’s balance sheet reduction may also be halted before long. Any such signals could drag the dollar lower and propel stocks higher.

The Fed has become more sensitive to market concerns lately, with even the most hawkish of policymakers voicing support for a more “patient” approach moving forward. Several officials made it clear that any further rate increases are on hold for now while they assess the impact of various risks, ranging from a weakening US housing market to a global economic slowdown to the trade dispute to recession fears. That doesn’t necessarily mean the tightening cycle is over, but rather that hikes will only resume once – and if – these risks subside. In turn, markets are pricing in a mere 20% probability for just a single quarter-point rate increase by year-end.

Turning to this meeting, attention will fall mainly on Chair Powell’s press conference, which will now be held after every meeting. Since hikes are “on pause”, investors will dissect his comments for any hints on the other burning topic: the balance sheet reduction. To explain, the Fed’s balance sheet – or portfolio – grew massively during the Quantitative Easing (QE) era, as the central bank bought assets to stimulate the economy. Now, the Fed is doing the opposite. It is shrinking this portfolio, which in essence amounts to tightening policy as it drains liquidity, and thus has similar effects to raising rates.

Recent media reports suggest policymakers are thinking about halting this portfolio reduction earlier than previously expected. If so, that would be the equivalent of easing monetary conditions, something that makes the dollar less attractive but increases the appeal of risky assets like stocks. While chief Powell is unlikely to go as far as actually announce a pause in the portfolio unwinding, he could very well hint that this would be a viable option if the economy slows down further, which may in itself be enough to trigger some of the aforementioned market reactions.

The other key determinant will be Powell’s broader tone on the economy, and to what extent he keeps further rate increases on the table. His job won’t be easy, as he will need to balance the fact that the US economy so far remains solid and may still require further hikes, with the possibility of a rate cut should investors’ fears of a recession prove correct. All while not appearing overly concerned himself, as any sense of nervousness from the Fed could incite even greater volatility in financial markets, which the central bank surely wants to avoid.

Outside of the Fed, there’s a lot more on the agenda this week for the dollar. Wednesday will also mark the start of another round of pivotal negotiations between the US and China; remember that the dollar has acted as a safe-haven on trade issues, so any signs of progress could harm the US currency. Separately, Friday will bring the release of the all-important US employment report and the ISM manufacturing PMI, both for January. Other key economic data out of the US scheduled for this week – including GDP figures – have been delayed without a specific day for their release yet, owing to the recent government shutdown. 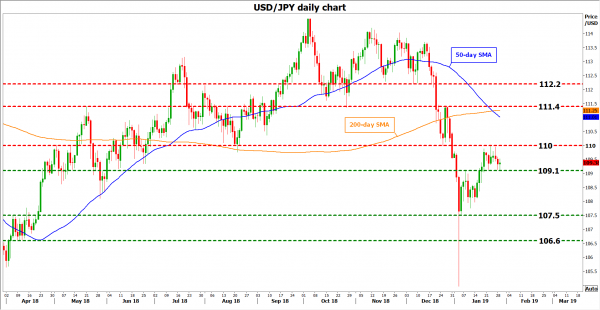 Technically, looking at dollar/yen, immediate support to declines may be found near 109.10, the low of January 22, with a downside break opening the way for a test of the 107.50 zone, defined by the January 4 trough.

On the flipside, initial resistance to advances may come around the 110.00 handle. If the bulls pierce above that, the next obstacle may be the 110.40 region; notice that both the 50-day and 200-day moving averages are nearby as well.