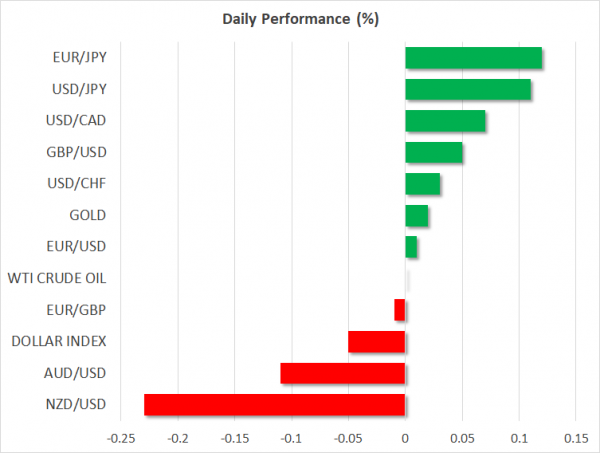 Subdued market moves ahead of fresh negotiating round

Stocks in Asia are mostly in the green on Tuesday, albeit only modestly so, while US markets remained closed on Monday for a public holiday. Moves in the FX market were equally subdued to kick off the week, with price action in the major pairs remaining confined in relatively tight ranges. The euro outperformed despite the ECB’s chief economist, Peter Praet, being the latest to join what seems like a coordinated effort to prepare markets for a dovish shift, indicating the Bank could “adapt” its forward guidance if the economy slows further.

Today may be more exciting though, as the US-China trade negotiations will resume in Washington. This round will also commence with deputy-level talks, before senior officials take over on Thursday. Recent price action implies that traders believe a deal is inching closer, as both sides are clearly thirsty for one. Yet, the fact that the latest round of talks wrapped up without either side providing any details on what progress was made is a red flag, and suggests some cause for vigilance, as much optimism is baked into stock prices already without any concrete evidence of progress.

UK politics were once again in focus, following news that seven Members of Parliament (MPs) representing Labour will break away from the Party over disagreements around the handling of Brexit, among other issues. Yet, the pound was unfazed by the news, as market participants judged that this is not a meaningful change in the Brexit landscape.

Today, UK employment data will hit the markets. Expectations are for a strong report overall, which may support the pound a little. That said, Brexit remains in limbo, with PM May still trying to squeeze some last-minute concessions from the EU, which probably won’t be legally-binding and hence not game changing. As such, uncertainty is set to remain elevated, implying that any data-induced rallies in sterling may remain limited until the political fog clears a little. In this respect, the next date to watch is February 27, when Parliament will vote on amendments that could force the government to take certain actions, like extending Article 50.

Overnight, some dovish remarks from BoJ Governor Kuroda made headlines. Firing a warning shot at yen bulls, the BoJ chief said his central bank will considering further easing of policy in case FX moves start to hurt the economy or threaten inflation. The reminder was enough to push the yen lower, though the move was admittedly small.

The schedule is relatively light today as well. On the data front, besides the UK employment figures, Germany’s ZEW survey for February could also attract attention, as it will provide the first indication of whether sentiment in Europe’s largest economy continues to weaken, or not.

The bi-weekly milk auction will also take place, and the outcome may impact the kiwi.

On the earnings front, Walmart is among the key names releasing their results today.