US stocks struggled as markets processed improving economic optimism from the two largest economies in the world while battling geopolitical risks. The US economy grew at a better pace than what markets expected and China’s factory gauge fell to a 3-year low, but many feared worse as the data included a week long break from factory workers due to the Lunar New Year holiday. Positive trade banter from White House Economic Adviser Kudlow and Treasury Secretary Mnuchin attempted to support risk appetite, while four Fed members provided patient and cautious tones. The dollar traded modestly higher against most of its major trading partners, while US stocks drifted lower as trade concerns linger.

The US economy performed better in the fourth quarter than what most economists expected. The last quarter of the year delivered 2.6% quarterly growth, down from 3.4% in third quarter but well above the analysts’ consensus of 2.2%. For the full year, real GDP increased 2.9%, just missing the President’s goal of 3.0%, but well above the 2.2% seen in 2017.

The strength in the September to December period came from robust consumer and business spending. Growth is expected to continue to slow as the effects of the Trump tax cuts are mostly done and risks of slower global growth remain.

The Fed will remain patient and it with economic growth and the labor market still showing strength, we may need to see a few months of deteriorating data for expectations to grow for the Fed’s next move to be a rate cut.

The US dollar rallied against the majority of its trading partners, while the 10-year Treasury yield rose to 3.1 basis points to 2.713%. 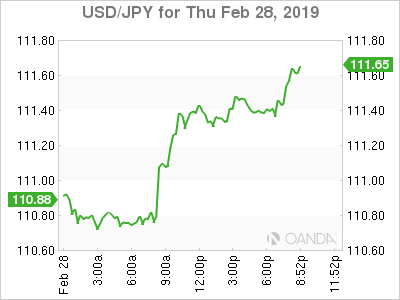 Talks on denuclearization with North Korea appear to be over now. As expected by most political experts, President Trump left Vietnam without an agreement with North Korea. Many Democrats feared he would settle on a poor deal and were pleased with the President’s decision.

President Trump claims he walked out on Kim Jong Un because he wanted all the sanctions lifted for the removal of their main nuclear facility in Yongbyon. North Korean officials are stating Kim requested to only have the sanctions lifted that were imposed in 2016 and 2017. Kim is said to have now lost the will continue talks. The economic pain in North Korea leaves the North Korean leader with little options, so he may aim to focus on strengthening their relationship with China.

The Cboe Volatility Index appears poised to snap a 9-week losing streak as geopolitical risks grow. Indian-Pakistan tensions along with US-China trade uncertainty have the volatility indicator approaching levels we saw right before the December swoon. As US stocks fail to make fresh highs, the path of least resistance could be lower and that could be accompanied with a surge in volatility.

Crude prices grinded higher on optimism the US economy remains on firm footing. The recent oil rally was supported by falling imports to the US and OPEC’s commitment to keep production cuts till year end.

Sanctions remain firmly in place as Venezuela’s presidential situation remains deadlocked. Venezuela’s opposition leader Juan Guaido is poised to return to Caracas this weekend despite threats he will be imprisoned. President Maduro is continuing to deny humanitarian aid into the country and there is no end in sight for his reign. The economic crisis is deepening each day and as sanctions increase, political violence will surge and pressure will grow on the military to disobey Maduro. 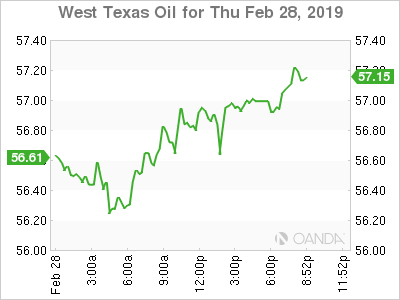 Gold’s slide continued after the US economy posted a better than expected GDP report. Weakness stemmed earlier from the de-escalation in tensions between India and Pakistan. The yellow metal is seeing the recent bullish trendline that began on November 13th tentatively break down.

Gold is not getting any help from better than expected US data and will likely need to see slower economic readings from China and Europe for the pullback to end. 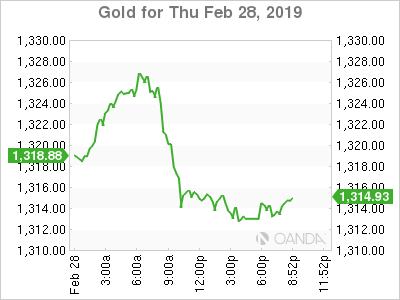 US 500 Index Turns Red After Five Months, May Heal Some Injuries In Near-Term

Gold Sellers Are Waiting In The Ambush