The UK Parliament approved the government’s motion for a delay of the Brexit date and the pound remained relatively stable. The motion provides the option for the government to ask the EU for a short delay if Parliament can agree to a Brexit deal by March 20th, or a longer delay if no deal can be found. Analysts point out that there already was a soft consensus in the market about the possible delay of the Brexit date. The motion implies that there will be a third vote on Theresa May’s deal once again before she meets her EU counterparts on the 21st and 22nd of March, probably Wednesday the 20th. We expect volatility to continue for GBP pairs reaching new highs, probably during the prementioned dates. Cable was somewhat volatile yesterday yet remained below the 1.3265 (R1) resistance line. We could see the pound taking a breather today and the pair maintaining a sideways movement, yet at the same time cable could prove sensitive to any further developments regarding Brexit. Should the bulls be in charge today, we could see cable breaking the 1.3265 (R1) resistance line and aiming for the 1.3350 (R2) resistance level. Should the bears take over, we could see the pair breaking the 1.3175 (S1) support line and aim for lower grounds.

BoJ remains on hold and the yen remains stable.

BoJ remained on hold as was widely expected early during the Asian session today, however sounded a bit dovish. The bank tweaked its assessment on the Japanese economy, as it cut its assessment on exports and output. The decision and most of the assessments where expected by the market, hence had little effect on the JPY. We expect that volatility may occur during Governor Kuroda’s press conference later on, especially should he show his readiness for further easing of the monetary policy if necessary. Please be advised that there may have been an effect on the pair by statements made by North Korean officials early this morning, that Kim Jong Un may be rethinking the moratorium on missile launches. We could see the JPY weakening should there be extensive dovish comments from BoJ Governor Kuroda. USD/JPY maintained a sideways motion yesterday and during the Asian session today, staying close yet above the 111.40 (S1) support line. We expect the pair to retain a bound range motion today, yet the pair could have some bullish tendencies today, should the BoJ governor maintain a dovish tone during his press conference and speech today and should the financial releases favour the USD side of the pair. Also the pair could be affected by any safe haven flow relating to the JPY. Should the pair come under the market’s selling interest, we could see it breaking the 111.40 (S1) support line and aim for the 110.15 (S2) support level. Should on the other hand, the market favour the pair’s long positions, we could see it aiming if not breaking the 112.55 (R1) resistance line.

In today’s European session we get Germany’s WPI rate for February and Eurozone’s final CPI rate for February. In the American session, we get from the US the NY Fed Mfg Index, the industrial production growth rate, the preliminary university of Michigan consumer sentiment indicator for March and the Baker Hughes active oil rig count. Also in the American session today we get from Canada the Manufacturing sales growth rate for January. Please note that during the European session BoJ governor Kuroda will be speaking twice and also that the EIA monthly report is due out and could affect the markets. On Monday during the Asian session, we get from Japan the trade balance for February and the final reading of the industrial production for January. 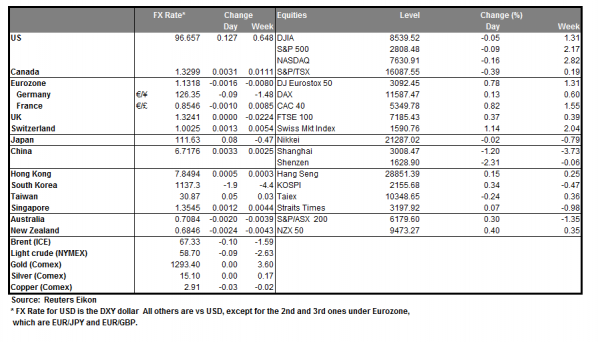