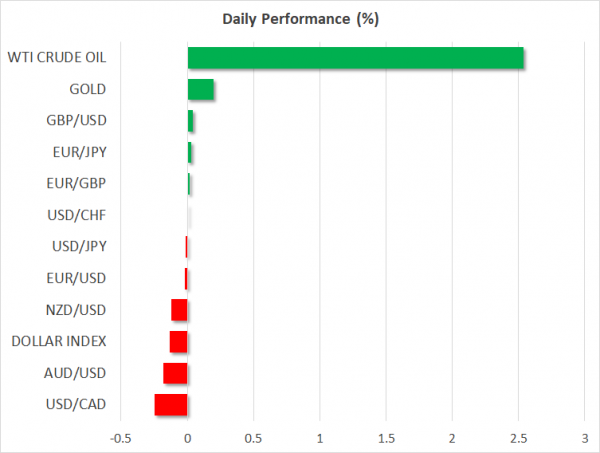 Oil jumps as US ‘tightens the screws’ on Iran

Energy markets came back to the forefront on Monday, following reports that Washington is set to announce that all Iranian oil exports will soon face ‘full’ sanctions, ending the waivers it had granted previously to key customers of Iran, like China, Japan, and India. Oil prices surged to fresh six-month highs, even though the move was widely anticipated, as the original waivers back in November were only meant to last six months.

The scale of the market reaction shows that many had expected these waivers to be extended for a few more months, so the news likely painted an even tighter picture for global oil supply, especially in light of Libya’s production being under threat too. On the demand side, concerns about global growth have subsided lately after some solid numbers from the US and China, creating the ‘perfect cocktail’ for oil prices to soar.

The ball is in OPEC’s court now, as the cartel will likely decide whether and to what extent to ‘open the taps’ and make up for the lost Iranian output – not least due to pressure from the Trump administration. Therefore, oil prices will take their cue by any remarks from the various officials heading into OPEC’s June 25 meeting.

In the FX market, things were much less exciting, with all the major pairs trading in very narrow ranges on Friday as most markets were closed for the Good Friday holiday. Accordingly, news flow was light as well, without any noteworthy headlines crossing the wires.

Even though American traders will go back to their desks today, most other nations – like the UK – are taking the day off again, which implies that liquidity will probably be thinner than usual. In thin markets, large moves can occur without much in the way of news, while any piece of news could have a disproportionally large impact, so extra caution may be warranted.

Even the Canadian dollar failed to gain substantially on Monday, unable to capitalize on the surge in oil prices. This likely underscores that traders are reluctant to increase their exposure to the loonie ahead of the BoC’s policy meeting on Wednesday, where the central bank may strike a more cautious tone amid some softness in the domestic economy.