The Canadian dollar is trading lower after the sudden drop in oil prices following the release of weekly US crude inventory data. The higher than expected buildup of 3.3 million barrels when a drawdown was expected drove the price of oil more than 4 percent lower. The high correlation between crude prices and the Canadian dollar dragged the currency lower despite the anxiety surrounding the testimony of former FBI director James Comey. Trump fired Comey and is now being called to clarify the request from the President to end the investigation into Mike Flynn and his possible connections to Russia.

Canadian economic data has been mixed so far this week. The Ivey PMI was lower than expected at 53.8 and building permits contracted 0.2 percent in April but less than the two previous months. Canadian real estate has been on a surprising uptrend that could be reaching its peak as provincial governments have moved to stabilize prices following affordability concerns and high levels of household debt. Housing starts are due Thursday, June 8 at 8:15 am EDT anticipated to come in at 205,000 with the New Housing Price Index (NHPI) to follow at 8:30 am EDT forecasted at 0.3 percent increase. The Bank of Canada (BoC) will release the Financial System Review at 10:30 am EDT with a press conference hosted by BoC Governor Stephen Poloz at 11:15 am EDT. Given the recent development with Home Trust Group, the concerns about rising household debt and the downgrading by Moody’s of the six major banks for their exposure to housing risks the market is anticipating some guidance from the central bank. 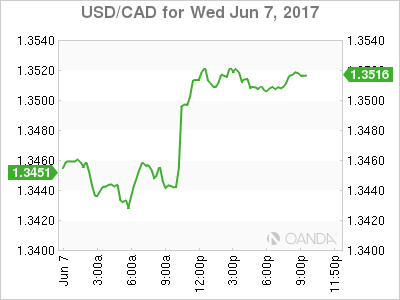 The USD/CAD gained 0.366 in the last 24 hours. The currency pair is trading at 1.3506 after the freewill in oil prices put the CAD under pressure. The USD also got some support from former FBI director James Comey’s statement addressing his meetings with President Donald Trump for which he is going to testify before a special committee of the US senate. Risk aversion was subdued ahead of the UK elections and the investigation in Washington but the loonie could not get any traction as the US crude inventories jumped 3.3 million barrels last week and sent the price of oil tumbling more than 4 percent.

The USD/CAD has been caught in a range of 1.3440 and 1.3540 as geopolitics in the US and UK have closed with oil prices and political turmoil in the Middle East. The rift between Arab states and Qatar could have dire consequences for the Organization of the Petroleum Exporting Countries (OPEC) agreement on cutting production and threaten the existence of the organization going forward. 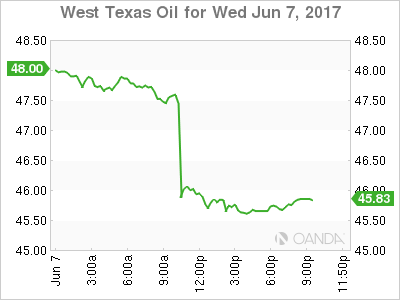 Oil lost 4.799 in the last 24 hours. The West Texas Intermediate is trading at $45.70 after the surprise buildup of US crude inventories this morning. Oil inventories rose 3.3 millions barrels when the forecast called for a drop of 3.5 million barrels. Gasoline inventories also gained as part of a worrisome trend that has seen demand stagnate ahead of the US driving season and putting more pressure on oil prices.

Increasing production from US shale producers has all but offset the best efforts from the Organization of the Petroleum Exporting Countries (OPEC) and other major producers that banded together to extend the production cut agreement until March 2018. The diplomatic situation with Qatar has also raised concerns on how solid is the group as internal rifts are reemerging. 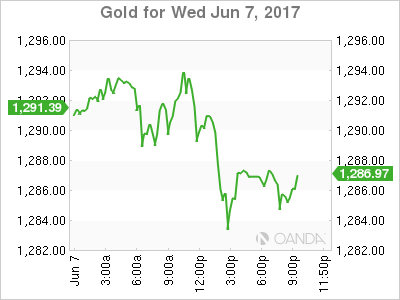 Gold lost 0.52 percent on Wednesday. The yellow metal is trading at $1,287.50 ahead of major geopolitical events. Gold has risen after the Trump administration started losing political capital in 2017. The metal was lower in November as the President-elect made huge promises to reform the taxes and spend on modernizing infrastructure around the US. The pro-growth policies have not yet arrived as the administration was embroiled in healthcare reform and immigration policies that have resulted in major backlash and driven the price of safe havens higher.

Gold traders will be following the testimony before the Senate special committee as well as tuning in the UK elections in case of an upset to the polls forecasting a Conservative majority win.