Japan will be post GDP growth figures for the first quarter on Monday (Sunday, 23:50 GMT). But with trade uncertainty still weighing heavily on export-dependent Japanese businesses, the data is unlikely to bring music to policymakers’ ears as the world’s third largest economy is expected to have contracted during the period.

After achieving non-interrupted growth for eight consecutive quarters in 2016-2017 – the longest stretch in nearly three decades, Japan’s economy hit a stumbling block in 2018 as trade tensions began to brew. The United States has yet to formally take its trade fight to Japan, having only held preliminary talks so far. But the slowdown in China (Japan’s biggest export market) and the uncertainty generated by the trade frictions have hurt demand and cast a shadow over firms’ outlook. 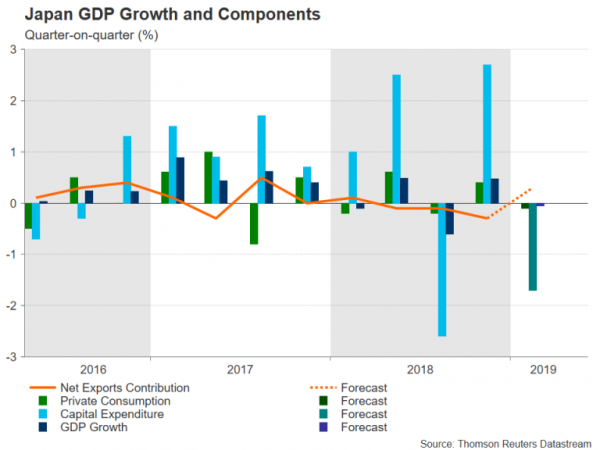 Economic growth in the first quarter is not expected to have benefited much from the easing of the trade tensions and the shift to a more accommodative policy stance by central banks around the world. In fact, the poor performance of exports probably acted as a drag, with any modest pickup unlikely to have been enough to offset anticipated drops in domestic consumption and business expenditure. GDP is forecast to have declined by 0.1% quarter-on-quarter and by 0.2% on an annualized basis. If confirmed, it would make it the third quarterly contraction in 15 months.

Should the GDP numbers reveal that the Japanese economy is in worse condition than is currently being projected, dollar/yen could get a lift to around the 110 handle, assuming safe-haven flows for the yen remain in check. But should Japan join the US, the Eurozone and China in reporting stronger-than-expected growth for Q1, dollar/yen could challenge key support at the 109 mark.

Bank of Japan not in a hurry to ease further

If growth during the first quarter isn’t as bad as feared, it would temporarily take the pressure off the Bank of Japan to take additional stimulus measures. However, even if the economy performed better than thought in Q1, the risks are clearly tilted to the downside as the chances of a quick resolution to the US-China trade dispute are looking increasingly remote. Hence, the Bank of Japan is unlikely to be let off the hook anytime soon as policymakers fret about stubbornly low inflation.

BoJ Governor Haruhiko Kuroda has repeatedly stressed the Bank would not hesitate to ease monetary policy further should the momentum in price increases be lost. However, at the same time, Kuroda has said the BoJ is not considering additional stimulus just now, meaning, there would have to be a significant deterioration in the growth picture before more easing is put back on the table.

The Bank of Japan is not the only one that would need to rethink policy if the economy was to falter again. There is growing speculation the government might have to delay its planned rate hike for October 2019 from 8% to 10% if growth appears to be weakening substantially. The government is due to publish its monthly assessment on the economy next week. Back in March, the government had cut its assessment for the first time in three years. Another downgrade in May would only fuel speculation of a third delay to the sales tax increase.