The Canadian dollar rose 0.31 percent against the US dollar on Tuesday. Rising commodities and a softer dollar combined to appreciate the loonie. US rate cut probabilities jumped after Fed Chief Powell, while not outright mentioning a rate cut, did suggest the central bank is ready to act if needed. A prolonged trade war with China and new fronts ready to be open are big obstacles for the US economy to navigate, which is why the Fed could add some stimulus via lower interest rates.

Oil and gold rose taking advantage of the US dollar softness. Risk appetite was also higher as investors bought equities putting behind some fears of antitrust measures in the tech sector. 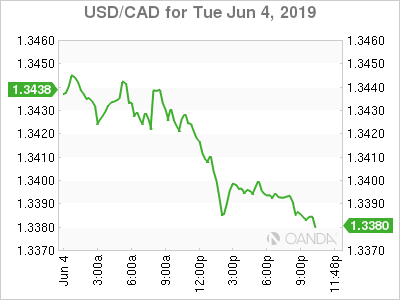 The USMCA remains on track with the three signing nations making comments for a swift ratification. The fly in the ointment could be actions such as Trump’s decision to target tariffs against Mexico for issues outside of the agreement.

Canadian manufacturing remains below 50 at 49.1, so technically it is not expanding, and it was a lower index than last month. Employment data will be released on Friday alongside the U.S. non-farm payrolls (NFP) report. Canadian jobs in April saw a massive 106.5K gain and there is a correction expected when the May data is released.

The US dollar is lower against major pairs on Tuesday. The greenback was sold across the board as remarks from U.S. Federal Reserve Chair Jerome Powell signalled the central bank could cut interest rates this year. The Fed hiked the benchmark rate four times in 2018, but as the US-China trade war drags on, it continues to have a negative impact on American growth.

The stock market saw a huge boost of the narrative that a rate cut could come sooner than later. The CME FedWatch tool points to a 23.3 percent chance of a rate cut in the upcoming June meeting. Fed Fund rate levels in December show a less than 15 percent probability the benchmark interest rate will be at the current 200-225 basis points.

Brent jumped 1.11 percent and WTI rose 0.38 percent after the US dollar fell on a possible rate cut gaining traction this year. Trade disputes have been negative for energy prices, and the White House decision to open a trade front with Mexico investors were anxious about sustained growth. 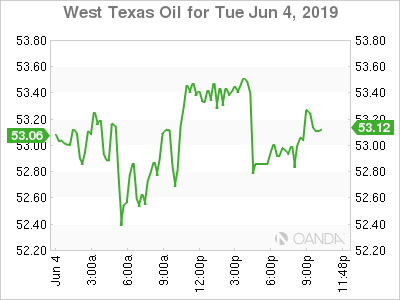 The US is impacting prices in three ways. Sanctions against Iran and Venezuela for political reasons have boosted prices as it reduced supply. US-China and US-Mexico trade disputes have a negative effect on global growth forecast reducing energy demand going forward. The final factor has been the rise of American output. While sanctions reduce supply and boost prices, lower energy demand and rising production depreciates crude as there is a higher risk of oversupply. 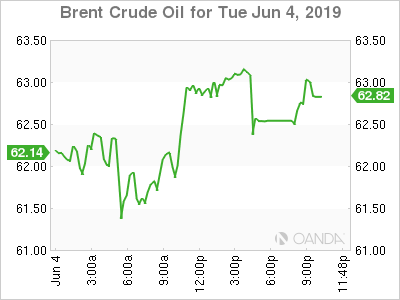 The OPEC+ deal has been the major stabilizing force holding energy prices, but the agreement to cut output comes with an expiration date. Russia has not committed publicly to an extension which could put more pressure on Saudi Arabia to keep the group united if they lose such a major producer.

US crude inventories are expected to shrink in this week’s data release. The softness of the dollar and a lower drawdown would be a positive for crude prices. Tougher trade rhetoric and risk aversion coupled with a lower than forecasted drawdown would once again cause a drop in energy prices.

Gold rose 0.31 percent on Tuesday as the trade war drums in the US keep beating. The decision by President Trump to open more than one trade front at the time resulted in a weaker dollar. The yellow metal is being used by investors as a safe haven to reduce dollar exposures. 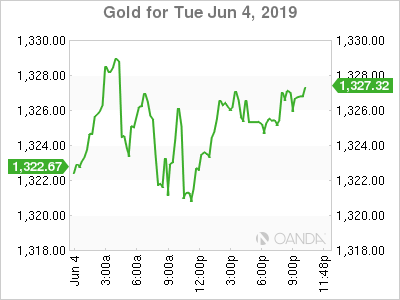 The words from Chair Powell were taken from the central banker handbook, he said very little of substance beyond the fact that the U.S. Federal Reserve will act if needed. A rate cut could be one of the measures needed, but the economy would have to show bigger signs of lack of momentum, even as trade disputes are slowing down growth.

Gold remains well above the $1,320 price level and given the geopolitical conditions there would have to be major advances on the trade war fronts and improving economic fundamentals for the yellow metal to depreciate against the greenback.

Investors bought into the stock market after Fed Chief Powell’s remarks hinted at a higher possibility of an interest rate cut this year. The Fed with four rate hikes in 2018 caused a major sell-off in December and had to reverse course in January. Today’s words by the top US central banker put US equities in its second-best day of the year. 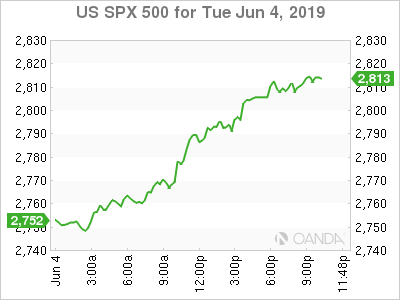 Anti-trust concerns were lower on Tuesday and the softness of the dollar gave a boost to equities. Trade war anxiety remains and companies with the biggest exposure to China and Mexico were affected. Chief Powell also mentioned the negative effect of a prolonged trade war and with is pledged to sustain the pace of growth of the US economy opened the door to an interest rate cut in the near to mid-term.

The pound rose 0.31 percent on Tuesday despite another economic indicator falling below expectations. British construction PMI dropped to 48.6 and is now below the level considered to be an expansion. Brexit anxiety has led to various data points pointing to a downward trend, but for now the political drama in the United Kingdom is focused on who will succeed Theresa May at the head of the Conservative party. 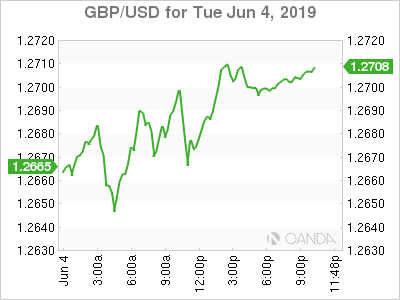 The ghost of a no-deal Brexit haunts the currency as the battle to gain support within the Tories heats up. The European parliament elections ironically showed a high support for the Brexit Party and in turn could put a hard Brexiteer at the head of the government.

Central banks took the center stage as an US interest rate cut could be on the table sooner than expected. Trade war headwinds and economic uncertainty could force the Fed to lower rates.