The Swiss National Bank will hold its quarterly policy meeting on Thursday with the announcement expected at 07:30 GMT. No changes in the Bank’s super low interest rates are being anticipated, but with the Swiss franc appreciating substantially in recent weeks on the back of growing global uncertainties such as trade frictions and Brexit, the SNB could toughen its language on the exchange rate.

The Swiss economy grew by a stronger-than-expected 0.6% quarter-on-quarter in the first three months of 2019, benefiting from easing trade tensions and a weaker currency. It represented a marked rebound from the significant slowdown seen in the second half of 2018. However, on the inflation front, price pressures remained muted well below 1% and the CPI rate fell to 0.6% in May.

With inflation unlikely to pick up substantially anytime soon, especially as the safe-haven franc is on the up again, and with growth prospects for the second quarter not looking particularly bright as trade tensions flare up once more, the conditions are all set for a very dovish SNB on Thursday. The central bank had already sharply lowered its conditional inflation forecast at its last meeting in March, suggesting that interest rates are unlikely to rise over the forecast period through the end of 2021. 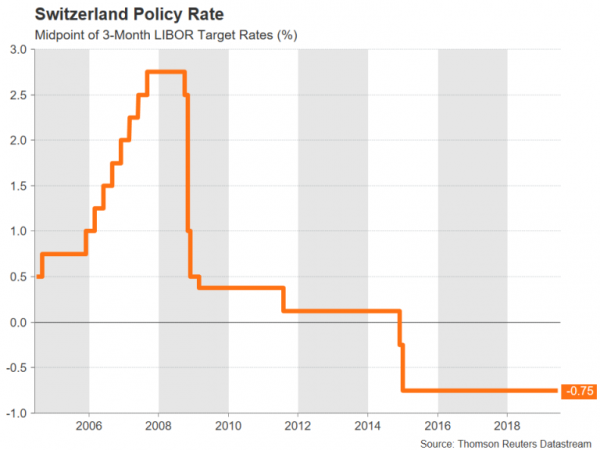 Trump’s trade war is a major source of uncertainty for the very open Swiss economy that’s hugely dependent on trade with the European Union. Apart from the negative impact on global growth, trade conflicts also tend to boost demand for safe assets and the Swiss franc, like the Japanese yen, is a favourite with investors due to Switzerland’s large current account surplus.

The franc has appreciated considerably since the beginning of May, notably against the euro, which is the primary concern for SNB policymakers. Euro/franc slid 3.1% from the high point on April 23 to the low point on June 3, before rebounding a little. A stronger franc is a major source of headache for the SNB as it not only weighs on prices but also hurts growth. 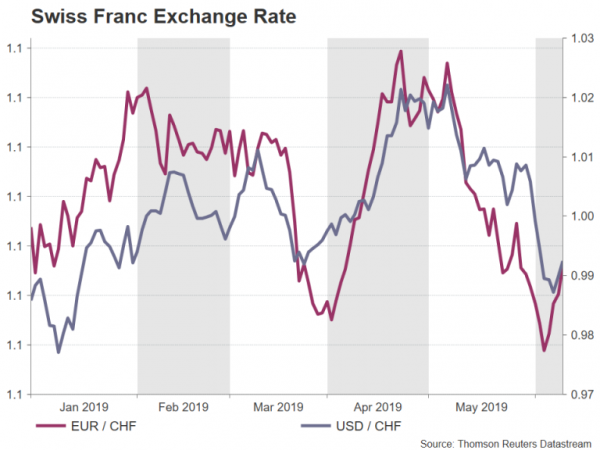 ECB delay a problem for the SNB

Complicating matters even more for the SNB is the potential delay in policy normalization by the European Central Bank. The ongoing slowdown in the Eurozone will probably force the ECB to ease policy in the coming months, with cutting rates being one option. If the ECB takes steps towards looser policy, it would be very difficult for the Swiss National Bank to maintain its current policy, as this would exacerbate the upside pressure on the franc.

At the March meeting, the SNB restated that the franc is “highly valued”. It’s possible the Bank will issue a more strongly worded statement at its June meeting regarding the exchange rate to make its unease clear to investors. SNB Chairman Thomas Jordan has repeatedly stressed the Bank’s readiness to intervene in the forex markets to keep the franc down and fresh warnings on Thursday could send the currency lower.

Dovish SNB a downside risk for the franc

Euro/franc faces immediate resistance at 1.1250 and could break above this level if Jordan sounds out fresh intervention warnings. Steeper gains are possible for the pair if the SNB makes a further dovish tilt by once again lowering its conditional inflation forecasts. This could send euro/franc towards the 23.6% Fibonacci retracement of the downleg from 1.2005 to 1.1117 at 1.1327.

If the SNB fails to provide enough dovish signals, euro/franc might find itself heading back towards the 22-month low of 1.1117 hit on June 3.

Looking beyond the June meeting, SNB policymakers will be closely monitoring how both domestic and overseas growth evolve in the coming months, in addition to the exchange rate, as well as keep one eye on the ECB. Investors are currently pricing about a 50% probability that the SNB will cut its policy rate by 25bps by March 2020 from the current record low of -0.75%. Those odds could rise if the SNB is overly dovish on Thursday.

GBP/CHF Should Stay Below W H3 For Bears To Dominate