Investors’ attention is shifting from the world central banks towards the G20 leaders. That way, Trump and Xi Jinping’s meeting to discuss the China-US trade deal has the greatest potential to impact on the markets.

It is hoped by investors that negotiations finally get off the ground. In addition, the focus is still on the tensions existing between Iran and the United States. Wherein, the markets have waited in anticipation for the “significant” sanctions set to be imposed by Trump, following Iran’s shooting down of an unmanned American drone.

This, in turn, has stimulated an Oil price rise, as well as stirring up investors’ interest in gold as a defensive asset – due to more cautious decisions at the end of the month and quarter. It could turn out to be the main driver of the last week of June, becoming the main springboard for important G20 statements – especially on Iran and trade negotiations.

S&P500 was able to update the historical highs on Friday but was under pressure in the last trading hours. The technical picture places the cards in the hands of the bulls, demonstrating that the index has not reached the overbought area yet. However, it should be noted that at the end of Friday’s trading session, sales increased on the backdrop of profit taking. 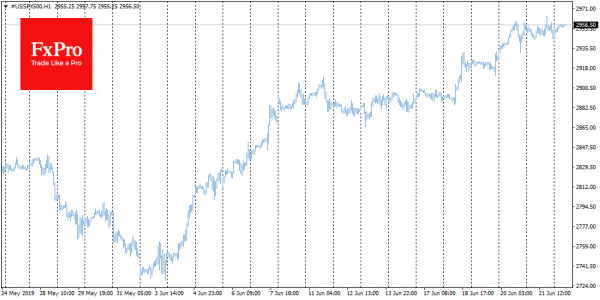 The US dollar depreciation continues to gain momentum. EURUSD rose to 1.1370, having made a breakthrough from levels below 1.12 to 1.1370 last week. From a technical analysis side, the close of the week had more effect on the markets than the significant resistance at 1.1300, around the 200-day MA. Fixing above these levels may strengthen the EURUSD buy-orders and mark the final break of the dollar’s upward trend. 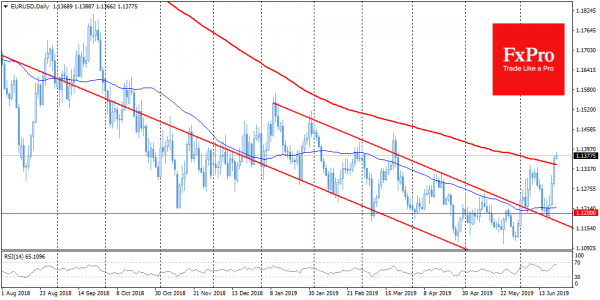 Gold exceeded 1400 on Friday but it remains above this level on Monday morning, even though the quotes retreated from the local maxima. The dollar has weakened, due to the Tehran and Washington tensions, the US-China trade negotiations failure, and the softening of the global central banks’ positions. Consequently, this has contributed to the Gold strengthening by more than 7.5% since early June. In addition, the breakthrough of multi-year highs caused a triggering of market activity on the stop orders and a closing of sell-positions. In the short term, Gold is overbought and may fall victim to a seasonal profit-taking that will become clearer by the end of the trading week. 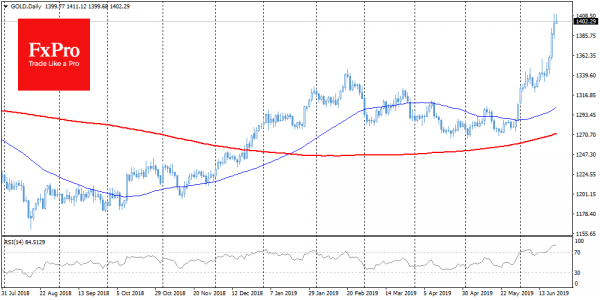