The US personal income and outlays report, which features the Fed’s favoured inflation gauge, will be scrutinized on Friday at 12:30 GMT, as speculation about the central bank’s next move reaches fever pitch. Subdued inflation and increased uncertainties about the outlook led the Fed to drop its ‘patient’ stance in June and signal its readiness to ‘act as appropriate’. But as the Federal Reserve considers its response to the worsening outlook, the US dollar’s recent sell-off is starting to seem overdone.

Personal income and spending figures, as well as the core Personal Consumption Expenditures (PCE) price index will be the most important release out of the United States before next week’s crucial jobs report for June. As the debate about a July rate cut quickly moves from ‘will they or won’t they’ to ’25bps or 50bps’, the two reports could prove decisive for policymakers as the economic data so far is inconclusive about the extent of the slowdown being encountered in the US.

Personal income is forecast to have risen by 0.3% month-on-month in May, easing slightly from the prior 0.5% rate. Personal consumption is expected to have accelerated a little, however, during the month, growing by 0.4% m/m. The figures by themselves suggest domestic demand remains healthy with no sign yet that consumption – the largest component of the US economy – is in danger of dwindling. 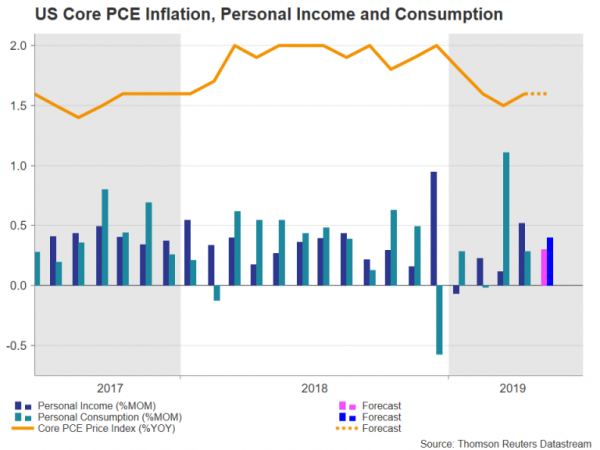 The main worry for the Fed, even before the collapse of the US-China trade talks, has been the surprisingly soft inflation picture. The core PCE price index, has come off the Fed’s 2% target this year, with policymakers blaming the decline on transitory factors. But even the Fed now appears to be questioning whether all the weakness is down to transient forces. The core PCE price index is forecast to stay unchanged at 1.6% year-on-year in May, indicating no pickup still in inflationary pressures.

The dollar is likely to remain on the backfoot if the PCE numbers are more or less in line with expectations and do little to alter the current picture on growth and inflation. But if the data disappoints, dollar/yen could extend its losses and head towards the 78.6% Fibonacci retracement of the January-April uptrend, at 106.55. Breaching this support would bring the 105 level into range, which is just above the 2019 low of 104.96.

Dollar vulnerable to upside surprises in the data

However, given that the pair is looking somewhat oversold at the moment (according to key technical indicators), a positive surprise could trigger an upside correction even if Fed funds futures don’t budge. Dollar/yen could break above immediate resistance at the 61.8% Fibonacci at 107.80 and the psychologically important 108 mark.

Looking further ahead and nearer the next FOMC meeting, the outlook for the greenback is becoming increasingly bearish as the Fed appears to be content in letting markets anticipate a rate cut. The bigger risk is whether the gloomy predictions stemming from the trade and other geopolitical uncertainties will materialize and what happens if investors have to sharply pare back their rate cut expectations for the Fed.