The Bank of Canada (BoC) is expected to stand pat when it wraps up its policy meeting at 14:00 GMT on Wednesday. Given the streak of strong data, policymakers could maintain a relatively sanguine tone, highlighting that rates are unlikely to be cut or raised anytime soon. With other major central banks preparing to ease, a neutral BoC would argue for a stronger loonie overall.

The Canadian economy has been performing better than most other developed nations lately. The labor market is tight, wages have picked up substantially, inflation is slightly above the BoC’s target, and economic growth likely rebounded materially in Q2. Meanwhile, companies are optimistic as was highlighted by the BoC’s most recent business survey, the housing market has stabilized, and trade tensions seem set to quiet down for now as the US-China talks resume.

Putting everything together, there’s no real case for the BoC to even consider cutting rates in the coming months, in contrast to most other major central banks like the Fed and ECB, which are preparing to add stimulus. Investors agree, with money markets pointing to a mere 20% probability for a BoC cut this year. It therefore seems likely that BoC policy will diverge from that of other economies, which argues for a stronger Canadian dollar, particularly against the currencies of nations that may slash rates the most – like the US. 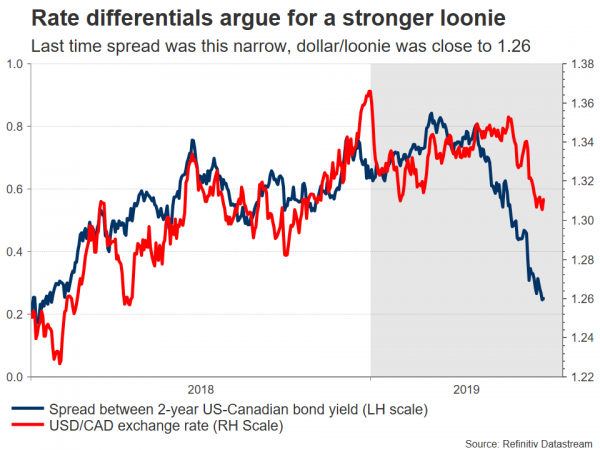 Perhaps the biggest argument for the BoC to tilt dovish in the future, besides potential weakness in incoming data, is the exchange rate itself. An appreciating loonie would push down on the prices of imports, making it harder for inflation to rise, so the BoC will probably try to avoid that route – either by signaling that cuts are possible or by actually cutting rates at some point. That said, the currency has to gain significantly before this becomes a problem that the BoC must tackle.

The other wildcard in this narrative is trade. Things may have calmed down for now, but a ‘ceasefire’ is very different from real progress, especially considering that Washington and Beijing are still far apart on some big issues. The bottom line is that if tensions escalate again, that could also cause the BoC to join the chorus of dovish central banks, eroding some of the loonie’s appeal.

In the shorter-term though, there may not be much that can stand in the loonie’s way higher, as both above-mentioned risks are mainly issues for the medium term. In fact, the loonie is already the best-performing major currency this year, up by 4.3% against the dollar and by 6.5% versus the euro.

Looking at the technical picture of dollar/loonie, a potential break below 1.3030 – perhaps on a ‘confident’ BoC – could see the pair challenge 1.2965 hurdle, the October 24 low.

On the upside, if the BoC places more emphasis on the external risks rather than the strong data, resistance to advances may be found near 1.3145, the July 1 high. Even higher, attention would turn to the support-turned-resistance area of 1.3225.

Finally, note that Governor Poloz will hold a press conference after the meeting and any noteworthy comments could impact the loonie as well. On the dollar side of the equation, Fed Chairman Powell will testify before Congress at the same time (14:00 GMT), while the minutes from the latest Fed meeting will be released a few hours later (18:00 GMT).

Loonie Extends Its Losses In The Morning Session

Loonie Trading On A Positive Footing This Morning