Financial markets remain on edge ahead of Fed Chair Powell’s crucial two days of House Congressional testimony that will begin on Wednesday.  Friday’s robust employment report, along with today’s better-than-expected NFIB Small Business Optimism survey continue to highlight the labor market remains unusual strong this late in the 11-year long economic cycle.  Powell is expected to keep the case for cutting rates open, but he could dash hopes for those expecting hints that we will see a commitment for more than one rate cut this year.  This morning, Powell will also provide opening remarks at a Boston-Fed conference on stress tests.

Overnight, risk aversion remained the dominant theme after BASF, the world’s largest chemical maker cut their 2019 forecast because of the trade war.  While a cut was expected by many analysts, the slashing of the 2019 EBIT forecast by 30% was considerably lower than what was feared.  The global automotive industry downturn was particularly strong and markets will not see any relief until we see the US fully address the trade spat with Europe, which they are likely to do once they wrap up the trade war with China.

In Asia, Hong Kong leader Carrie Lam gave an interview to state that the China extradition bill is dead.  The decision however is not a formal withdrawal of the bill and may be too late to derail Hong Kong protesters who want it completely withdrawn and are seeking democracy for Hong Kong.  Lam could decide to bring back the bill with 12 days’ notice and that risk is likely to keep the weeks-long protests going strong.

As markets await the next update on the trade front, the situation remains tense between China and the US.  Taiwan is set to acquire $2 billion of US weapons, in what China is claiming is a violation of international law.

US stocks markets are off the lows of the day, after Pepsico earnings delivered a slight beat that saw beverage seller affirm their 2019 targets.  Treasury yields are slightly higher, with the 10-year yield up 1.0 basis point to 2.058%.  The dollar is up against its major trading partners with the biggest gains against the British pound and Aussie dollar. 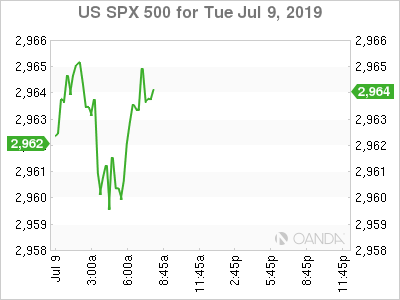 Crude prices are likely to see some support on fears of further tanker attacks or seizures in the Persian Gulf.  Yesterday, a BP oil tanker that was due to travel from Iraq to Europe decided to stay put in fear that they could get seized by Iran.

Oil markets are also eagerly awaiting Fed Chair Powell’s testimony to Congress, which will provide confirmation the end of month meeting is live and that they will remain data dependent on how deep they will take this upcoming rate cutting cycle.

Commodity prices could see a strong move following Powell if focus on deflationary risks and triggers a dollar reversal. 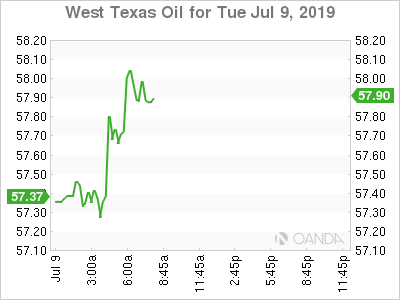 The strong dollar is temporarily derailing the bullion rally.  The yellow metal is now down $50 from the June 25th high of $1,442.90.  Gold was ripe for a pullback and buyers will welcome the current pullback.  Even if Powell is not dovish enough with this week’s testimony, gold should find strong support around the $1,370 region. 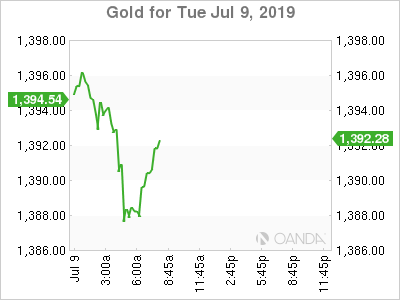 Cryptocurrencies are here to stay.  US regulators have made progress in outlining how current securities rules will apply to digital tokens.  The crypto space is likely to get crowded and we will see large financial institution launch their own competing coins in the very near future.  Bitcoin will benefit from this increased regulation and should see further bullish momentum. 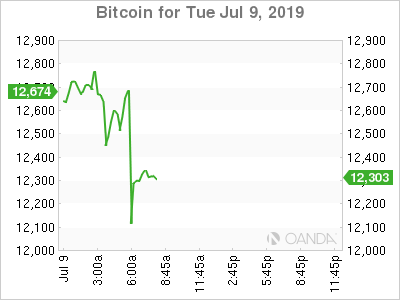 Crude Climbs Higher On US Inventories