AUD/USD marked slight gains as the Chinese GDP rates for Q2 (+1.6% qoq), outperformed expectations (+1.5% qoq). It should be noted though, that on a year on year basis China’s GDP rate slowed down (+6.2% yoy) as expected, reaching its lowest level for years. On the flip side, China’s industrial production, which is considered a key sector, picked up pace reaching +6.3% yoy, once again outperforming expectations and easing worries somewhat. Worries about China’s growth rate are expected to continue to feed headlines and could be indicative of a coming global economic slowdown. We expect that renewed headlines could increase the risk off sentiment of the markets in the coming days, which in turn could weaken the AUD. It should be noted that the release of RBA’s meeting minutes tomorrow during the Asian session could affect the Aussie’s strengthening, should there be extensive dovishness about a coming rate cut. AUD/USD continued to rise on Friday and during today’s Asian session, breaking the 0.7000 (S1) resistance line, now turned to support. We maintain a bullish outlook for the pair, as long as the upward trendline incepted since the 10th of July, remains intact. Should the bulls maintain control over the pair’s direction, we could see it breaking the 0.7065 (R1) resistance line and aim for higher grounds. Should the bears take over, we could see the pair breaking the prementioned upward trendline and the 0.7000 (S1) support line, aiming for the 0.6925 (S2) support level.

Bitcoin drops during the weekend

Bitcoin tumbled during the weekend as at some point reached below the reading of 10000, before correcting higher. Main fundamental reason cited by analysts seems to be the negative tweets posted by US president Trump. Analysts are also mentioning that the cryptocurrency’s stellar run, could be tested in the next days as the U.S. Financial Stability Oversight Council is also expected to conduct a review. It should be noted that the 5 Billion fine imposed from the US Federal Trade Commission on Facebook, may not be connected to Libra and the cryptomarket, yet predisposes for a tougher stance of US authorities for Facebook and its intentions to release Libra. Should negative headlines continue to reel in about the cryptomarket, we could see Bitcoin dropping further. Bitcoin prices tumbled during the weekend breaking the 11580 (R2), the 11000 (R1) support lines (now turned to resistance) and temporarily the 10200 (S1) support level. Should the bearish sentiment for the cryptocurrency be maintained, we could see Bitcoin’s value dropping even further. Should the cryptocurrency remain under the selling interest of the market, we could see it breaking the 10200 (S1) support line once again and aim for the 9350 (S2) support level. On the flip side, should the market favor the pair’s long positions, we could see it aiming if not breaking the 11000 (R1) resistance hurdle.

Today during the American session, we get from the US the NY Fed Manufacturing Index for July. In tomorrow’s Asian session, we get New Zealand’s CPI rate for Q2 and from Australia, RBA’s meeting minutes are to be released. Also bear in mind that NY Fed President Williams is scheduled to speak today and could move the USD

As for the rest of the week: 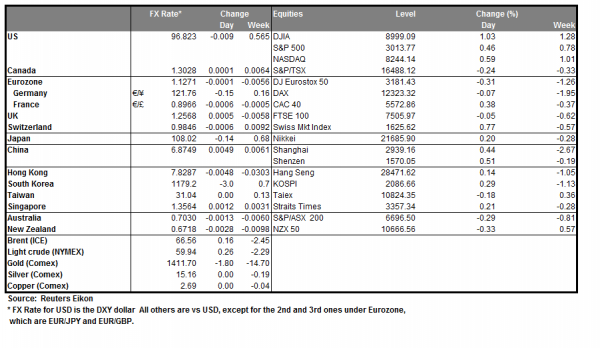