The Reserve Bank of New Zealand (RBNZ) has clearly stated in June that further monetary easing might be needed over time to help the central bank to meet its inflation and employment objectives. On Monday at 2245 GMT the Consumer Price Index (CPI) report is likely to show that inflation has heated up in the second quarter, but not sufficiently to scrap the need for more stimulus.

The headline CPI is forecast to rebound from 0.1% to 0.6% quarter-on-quarter in the April-June period, which could push the annual measure to 1.7% from 1.5% previously. The latter would match the central bank’s inflation estimate of 1.7% for this year but not the 2.0% midpoint of its 1-3% target, calling for a more relaxed monetary policy as temporary factors such as higher fuel prices may have underpinned the price increase. 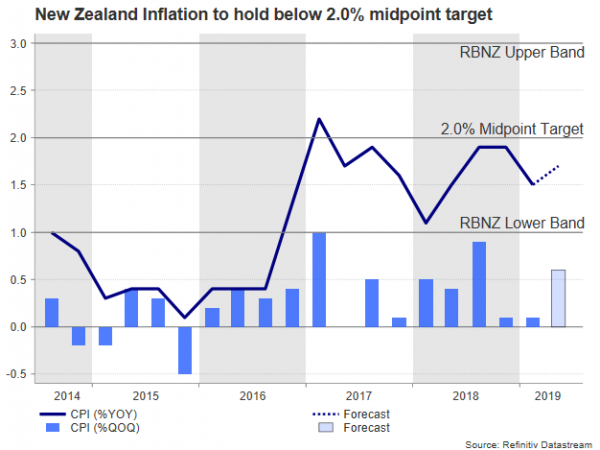 While a rebound in headline inflation could be food for thought for those who believe that the Reserve Bank of New Zealand (RBNZ) will deliver a second rate cut in August, the complicated situation on the global trade front is rather clouding the outlook for the risk-sensitive kiwi economy. Given that China is New Zealand’s largest trading partner, particularly in dairy and meat products, and a key source of tourism and foreign investment, any additional barrier to China’s trade activities would theoretically weigh on China’s growth and thus slowdown its overseas purchases – unless the kiwi currency depreciates enough to keep domestic products competitive.

In truth, the aggressive US-Sino trade war has yet to hurt New Zealand’s trade terms with China as recent data showed that the trade surplus between the countries continued to strengthen by the end of May. In addition to a depreciated kiwi currency, the fiscal and monetary support in China have likely provided some comfort to businesses. Nevertheless, with the rest of the data being on the back-foot, including GDP growth, house sales, consumer confidence and manufacturing PMI at a time when the global economy is losing strength, the RBNZ could reduce borrowing costs as soon as in August to avoid a sharper growth deceleration in case the trade war escalates further.

Since the inflation report is not available as often as in other major economies, the data are expected to bring volatility to the kiwi during the Asian session. A lower-than-expected CPI reading – especially in the core CPI measures – would raise the already elevated stakes for a 25 bps rate cut at the next policy meeting in August, consequently pressuring NZDUSD back into the 0.67-0.6660 area.

A beat in the data could help the pair to reach resistance near 0.6770 but would still leave options for further monetary easing open as only an annual inflation at 2.0% or higher would make the RBNZ hesitant. A bigger upside surprise in CPI numbers may also drive the pair towards the 0.68-0.6830 restrictive region.

It is also worth noting that the employment report due on August 6th and a day before the policy meeting would provide further direction on the RBNZ’s strategy.  Any weakness in inflation or employment data will probably lead to additional stimulus.