Canada will publish June inflation data on Wednesday at 12:30 GMT as well as retail sales numbers for May on Friday, also at 12:30 GMT. Following, the Bank of Canada’s surprisingly overcautious tone at the last policy meeting, investors will be watching to see if the upcoming data support the Bank’s view that the recent uptick in growth and inflation is temporary. However, that may still not be enough to halt the Canadian dollar’s advance against the US dollar, which is facing much deeper bearish bets.

The headline rate of inflation in Canada unexpectedly jumped to 2.4% year-on-year in May, casting serious doubt on the likelihood of a rate cut by the Bank of Canada. The strong data was soon followed by upbeat monthly GDP estimates, further dashing expectations that the BoC would soon join the US Federal Reserve in lowering rates.

However, whilst many would have expected Governor Stephen Poloz to strike a somewhat more upbeat tone at the June 10 policy meeting, and perhaps even leave the door open for a rate hike, the emphasis was on the downside risks to the Canadian economy from the trade tensions. The BoC sees the pick-up in both growth and inflation to be temporary and is increasingly worried about the outlook. Wednesday’s CPI figures will likely reinforce this view.

CPI to fall back in June

The CPI rate is forecast to have declined by 0.2% month-on-month in June, cutting the annual rate to 2.0% in June from the prior 2.4%. The BoC will of course also be watching its three preferred measures of core inflation. In May, CPI trim and CPI median edged above the midpoint of the Bank’s 1-3% target band, though CPI common remained unchanged at 1.8%. Policymakers are likely to wait for these measures to dip back below 2% before considering a rate cut. 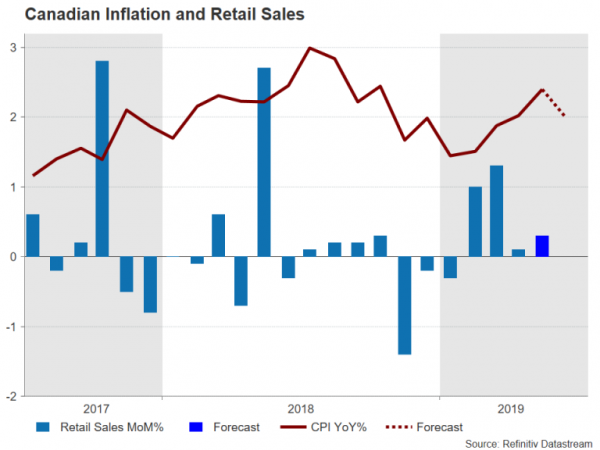 Solid retail sales expected for May

Looking at the retail sales numbers, however, they’re not predicted to raise any concerns about the growth picture just yet (though it should be pointed out that the figures to be released are for May and not June). Retail sales are forecast to have risen by 0.3% m/m in May, accelerating from the prior 0.1%. They should provide a good clue to the next monthly GDP print, due on July 31.

If growth remains solid and inflation doesn’t diverge too far from 2%, the Bank of Canada is likely to stay on hold. One factor, however, that could complicate matters for the BoC is the exchange rate. The loonie is one of the best performers versus the greenback this year (+4.3% year-to-date), recently brushing an 8½-month high of C$1.3014 to the US dollar.

A strong loonie would be quite harmful for Canada’s exports, given that three quarters of them go to the United States. It would also weigh on inflation by keeping import costs down. Hence, more advances in the loonie could prompt the BoC to take action to curb further appreciation, especially if there’s no improvement on the trade war front.

Looking at the near-term picture, however, for dollar/loonie, the pair is at risk of breaching immediate support around 1.3012 – the 261.8% Fibonacci extension of the upleg from 1.3353-1.3564 – if this week’s data is broadly positive. If that region is broken, the slide could continue until 1.2880 – a previous support level.

But should the inflation and retail sales reports disappoint and increase bets of a BoC rate cut in the coming months, dollar/loonie could rebound initially to around 1.3140 – a recent resistance point, before aiming for the 161.8% Fibonacci at 1.3223.

Canada’s Economy Contracted On A Monthly Basis In April

Dollar Firms Up But Yet to Break Resistance Against Weakening Euro