Japan will publish GDP figures for the second quarter on Friday (Thursday, 23:50 GMT), and is expected to join its peers in reporting slower growth for the period. As the Bank of Japan ponders whether to ramp up an already mammoth asset purchase program, will the GDP data nudge policymakers closer to pulling the trigger on more stimulus?

Growth in Japan in the first three months of the year was an unexpectedly solid 0.6% quarter-on-quarter, though this was mainly down to imports falling faster than exports than any positive factor driving the expansion. However, in the second quarter, the contribution from net trade was probably negative, as the ongoing trade war likely had a more severe impact on exports.

Net trade is expected to have deducted 0.5% from GDP growth in Q2. But a projected 0.6% rebound in private consumption and a 0.7% rise in capital expenditure are anticipated to have helped the economy to eke out growth of 0.1% in the second quarter. 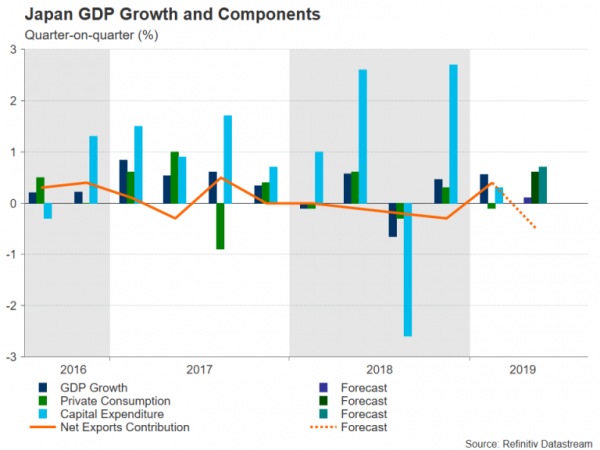 If the numbers are reported more or less in line with estimates, the Bank of Japan is likely to continue insisting that the economy is maintaining momentum to lift inflation to its 2% target. However, with trade tensions intensifying in recent days and showing no sign of abating, the BoJ’s expected recovery in growth over the next couple of years may not materialise. Making matters worse for policymakers is the surge in the Japanese yen, which has rocketed to multi-year highs against many of its rivals.

While the BoJ does not explicitly target the exchange rate, a stronger yen would have a considerable negative impact on growth via weaker exports and on inflation through lower import prices. Hence, if the yen continues to head higher, it’s likely to draw some kind of a response, if not from the Bank of Japan, then from the Finance Ministry, which is responsible for exchange rate policy.

For now, though, the risks for the yen are clearly tilted to the upside as trade frictions remain elevated. An in-line or better-than-expected GDP report would preserve that bias and dollar/yen could resume its slide to break below the immediate support at 105.50 and head towards the 105 level, near the 2019 low of 104.96. A sharper sell-off would bring into range the March 2018 trough of 104.55.

However, if the growth data misses the forecasts and is worrying enough to fuel expectations of more BoJ stimulus sooner rather than later, dollar/yen could clear the immediate hurdle in the 106.55 region and aim for the July swing-low of 107.2, before targeting the previously congested area of 107.80