The two-step-forward, one-step back escalation in US-China trade tensions had a one-step back week with the Trump administration announcing the 3½-month delay of about 60% of a promised 10% tariff hike on imports from China planned for September 1st. The move did little if anything to reduce trade uncertainty. And earlier tariff hikes, which disproportionately have been on industrial production inputs, are still in place. The US industrial sector still looks soft as a result. Manufacturing output declined 0.4% in July in this week’s industrial production report and is down half a percent from a year ago. Uncertainty will continue to weigh on business investment. We expect Canadian manufacturing sales will start to see more negative spill-over effects over the second half of 2019 as well after generally outperforming in data year-to-date through May. June Canadian exports were quite soft and we expect that will be reflected in a drop in June manufacturing sales being reported next week as well to retrace a big chunk of a surprisingly large May gain.

But another consequence of rising global trade tensions/growth-concerns has been sharply lower interest rates. Long-term bond yields have fallen faster than short. Such yield curve flattening/’inversion’ has historically presaged recessions in the US, raising red flags in financial markets. But that historical correlation aside, lower interest rates are, on their own, growth positive. For now, labour markets still look strong. Unemployment rates in most advanced economies are still very low. In Canada, labour shortages are still commonly reported. Wage growth has strengthened. “Core” CPI measures look more likely to tick lower than higher in next week’s July Canadian CPI data, but underlying inflation trends still look like they’re tracking right around the Bank of Canada’s 2% target. And households have looked much less concerned about trade uncertainty than businesses. Consumer confidence is still sitting around cycle-highs in both Canada and the United States.

Add sharply lower borrowing costs to the mix, and household spending indicators have, predictably, started to look a little better. US retail sales looked solid again in July. In Canada, housing markets have shown clear signs of stabilizing. We expect June Canadian retail sales next week will show a tick higher, once looking through a price-related pullback in gasoline station sales, after a soft May report that looked like it might have been weather-related. As in other countries, trade uncertainty remains a legitimately concerning downside risk for the Canadian industrial sector and will weigh on economic growth. Yet near-term headwinds to the household sector are also looking smaller now than they did just a few months ago. 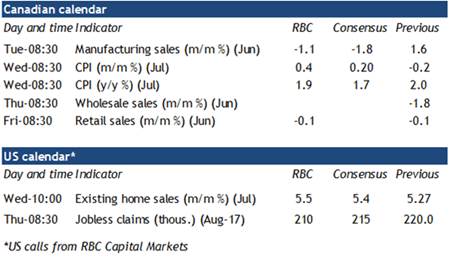