EUR/USD. As expected by most experts, supported by graphical analysis, the dollar went up last week, while the EUR/USD pair went down along with the euro. True, it did not reach the set target, the low of August 1, 1.1025, having found the local bottom at the level of 1.1065.

The reason for the fall of the European currency was in the first place, “doves” promises by the general director of the Bank of Finland and former candidate for the ECB Olli Rehn. According to the statement of this prominent European official, it is already in September that the market expects a reduction in the key rate by 0.1 (and possibly by 0.2) percentage points (now it is -0.4%), as well as the resumption of the QE quantitative easing program in volume about 50 billion euros monthly.

In addition, not the best economic statistics from Germany and China and the unexpected growth in US retail sales played in favor of the dollar. The market had been expecting this indicator to decline from 0.7% to 0.3%, but it rose to 1.0%.

GBP/USD. Last week, analysts did not expect any significant changes in the British pound, so their forecast was classified as neutral. As for technical analysis, 25% of the oscillators on H4 and D1 gave signals about the overselling of the pair, which, as practice shows, is a strong signal for a trend reversal and upcoming correction. This was what happened: having rebounded from the level of 1.2015, the pair went north, fixing the week’s high at 1.2175 on Friday. The final five-day chord sounded in the 1.2140 zone, which can be called the Pivot Point of the first week of August;

USD/JPY. A third of analysts, supported by 85% of the oscillators and 100% of the trend indicators on H4 and D1, were sure that the Japanese currency would continue to play the role of a quiet refuge from currency storms, and therefore the pair would continue to fall to the low of January 3, 2019. at the level of 105.00. That was what happened, and it was already on Monday, August 12, that the pair approached this mark.

Another third of the experts and graphical analysis on D1 had voted for the trend to turn up and lift the pair to the height of 107.00, which it reached the next day, on Tuesday, August 13.

The ending of the week satisfied the remaining third of specialists, who had taken a neutral position. If you look at the graph of the last two weeks, you can see that the pair moved to the side channel 105.00–107.00 and completed the working session closer to its center, at 106.35. Thus, all three scenarios can be considered fulfilled – bearish, bullish and neutral;

Cryptocurrencies. Crypto enthusiasts, such as Fundstrat analyst Tom Lee or Morgan Creek co-founder Anthony Pompliano, continue to attempt to raise Bitcoin status, claiming it has already become a safe haven asset, along with gold or the Japanese yen. And here it is questionable, what kind of refuge it is, if only from August 08 to 15 this digital currency lost more than 20% of its value, collapsing from $12,000 to $9,500?

With such frenzied volatility, Bitcoin is not a safe haven, but an ideal tool for high-risk speculation. Well and a refuge as well, but not from fluctuations in traditional financial markets, but from … its younger colleagues in the digital market, altcoins, the interest in which is constantly falling.

If you look at the dynamics of the altcoin market, starting from the peak on June 26, its capitalization fell from $124 to $79 billion, that is, more than 36%. Losses of bitcoin are twice lower :18% (drop from $229 to $187 billion). Accordingly, investors are gradually losing interest even in top coins such as Ethereum (ETH), Ripple (XRP) and Litecoin (LTC), switching their attention to bitcoin (BTC), whose market share has already exceeded 70%.

As for the forecast for the coming week, summarizing the opinions of a number of analysts, as well as forecasts made on the basis of a variety of methods of technical and graphical analysis, we can say the following:

EUR/USD. On one European scale, there is a slowdown in the economic growth of the EU’s most important partner – China, weak economic performance in Germany, problems of Italy and Brexit. On the other, the American one, macro statistics from the United States are pleasing to the eye and the Fed’s leadership claims that the American economy is on a solid foundation and that it doesn’t fear any trade wars. It would seem that the answer to the question on which side the advantage should be is clear: on the side of the dollar. That is exactly what 65% of experts believe, supported by almost 100% of oscillators and trend indicators on H4 and D1. The immediate goal is support in the zone 1.1000–1.1025, after breaking through which there will be only 1000 points to 1: 1 parity. At the current rate of decline, it may take a little over a year to overcome this distance. (Recall that the pair was already dropping to the level of 1.0350 in December 2016).

However, if you imagine other scales, everything becomes not so obvious. So, on one, European, scale there is the decrease in the euro interest rate announced by Olli Rehn for September and the resuscitation of the QE program. And on the US scale – the expectation of a recession in the US economy, Donald Trump’s discontent with the actions of the Fed and, as a result, a possible reduction in the dollar rate by the end of 2019 from 2.25% to 1.85%. If the head of the Federal Reserve Jerome Powell succumbs to pressure from the US president, a trend reversal upward and the pair’s rise to marks in the zone 1.1300-1.1400 are not excluded. And if in the near future it is 35% of analysts who do not exclude such an opportunity, in the medium term their number increases to 55%.

According to experts, the results of the Fed meeting on Wednesday, August 21 and the annual economic symposium in Jackson Hole, which will also be held next week, should give some clarity about the US financial policy. In addition, the report on the ECB meeting on monetary policy, which will be released on Thursday, August 22, is of great interest;

GBP/USD. A rather interesting situation has developed in the UK. On the one hand, production is declining, falling by 0.6% compared to last year. On the other hand, instead of the retail sales drop of 0.3% expected in July, their growth by 0.2% was noted. This may indicate that, watching the fall of the pound and fearing the consequences of Brexit, the country’s residents prefer shopping rather than financial savings.

It is not clear how long this situation will last. We need to wait for the steps of the new Prime Minister Boris Johnson and the reaction of the British Parliament to them. Until this happens, the respite that the pair has taken in its fall will, according to the majority (65%) of experts, continue, and the pair will stay in the side channel 1.2000–1.2200. The closest support level is 1.2050, resistance is 1.2175.

USD/JPY. The decision of the US authorities to postpone the introduction of additional duties on Chinese imports did not help the dollar much: investors still strongly doubt the peaceful end of the US-Chinese trade war. So, the yen will continue to play the role of a quiet financial haven. The expectation of a coming recession in the US economy and lower interest rates by the US Federal Reserve also plays against the dollar. Added to this is a drop in yields on 10-year US bonds, which have already fallen to 1.6%. Moreover, the yield spread of these securities has fallen below zero. Which, in theory, should lead to further strengthening of the Japanese currency and a decrease in the pair. However, experts supported by graphical analysis on H4 are inclined to believe that the pair will stay in the side channel 105.00–107.00 for at least another week. But in the future, most of them (60%) expect not a fall, but, on the contrary, that the dollar will strengthen, and the pair will rise to the zone of 108.50-109.00. Graphical analysis on D1 agrees with this forecast;

Cryptocurrencies. Giving long-term forecasts is a blessing. And the more distant the forecast, the better. If it does not come true, it’s okay: everyone forgot about it a long time ago. And if the forecast is correct, then you can remind about yourself.

For example, Tim Draper, the investor and head of Draper Associates, has predicted that Bitcoin would hit $250,000, possibly at the end of 2022, or maybe at the beginning of 2023. Well, only three years are left to wait.

If we talk about more near forecasts, famous cryptocurrency analyst Nicholas Merten is confident that Bitcoin will reach the $15,000 mark in a few weeks. It is possible that he is right, and a trend reversal is just around the corner, but so far there are no clear signs to buy, and the Bitcoin Fear & Greed Index is still at the “Fear” mark. 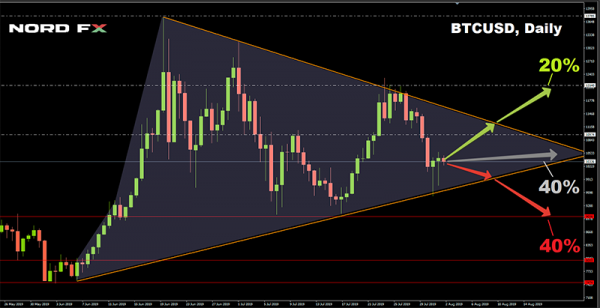