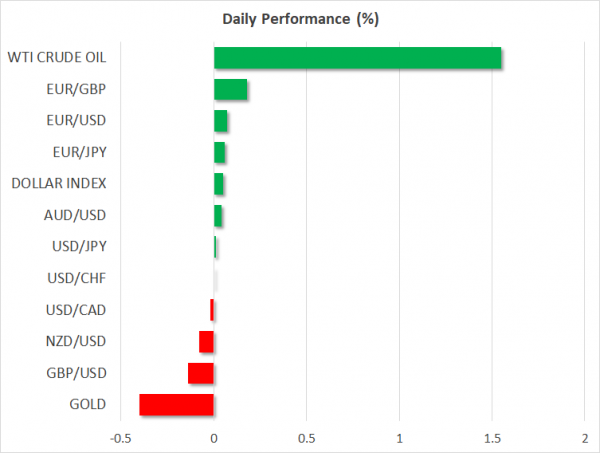 Markets opened in a positive mood on Monday, extending the rebound in risk appetite from late last week. Sentiment was boosted from developments over the weekend that underscored expectations that policymakers around the world are taking action to support their economies.

China announced on Saturday a reform to how one of its interest rates – the loan prime rate (LPR) – is set. The changes, which are designed to make it more market-based, are expected to lead to a reduction in the LPR to significantly below the benchmark one-year rate, lowering the borrowing cost for many small businesses.

Further adding to the positive sentiment was confirmation by Germany’s finance minister on Sunday that the government is considering increasing spending to support growth, indicating that the size of such a fiscal package could amount to 50 billion euros.

Stocks up, safe havens pull back, but caution remains

Shares surged in China, encouraged by authorities’ latest attempt to stimulate the slowing Chinese economy, driving the leading indices more than 2% higher at the close. Stocks in Europe and the United States were also looking on adding to Friday’s strong gains, with equity futures up by around 1% at the European open.

The improved risk-on tone weighed on the traditional safe-haven assets. Gold slipped for a second day, while the yen and franc moved broadly lower against other majors.

But investors are unlikely to dump their holdings of safety assets in big volumes just yet as many uncertainties remain, particularly, over the direction of US-China trade talks. President Trump on Sunday repeated that he’s “not ready” to do a deal with China, linking any progress to how the mass protests in Hong Kong are resolved.

There were also conflicting messages regarding the ban on Huawei as Trump appeared opposed to easing restrictions on the Chinese telecom giant, casting doubt on earlier reports that the US will extend some of the exemptions on the company for a further 90 days. The Trump administration is due to announce later today whether to go ahead with the extension. Should the President decide against renewing some licenses for US firms to do business with Huawei, this could jeopardise the planned trade talks in September between US and Chinese negotiators.

However, investors chose to focus, at least for now, on the prospect of more monetary and fiscal stimulus around the world, and the US dollar was aiming for a third straight day of gains against the yen. The greenback was last trading slightly higher at 106.38 yen, while the euro was firmer at just above $1.11.

The single currency breached the key $1.11 level last week after the ECB’s Olli Rehn hinted at a large stimulus package at the next policy decision and investors will be watching for more clues from the bank’s July meeting minutes due on Thursday.

The pound gave up some of Friday’s solid gains amid lack of enthusiasm in Parliament for Labour leader Jeremy Corbyn’s plans to head a temporary government in a bid to thwart a no-deal Brexit. Corbyn is reportedly set to meet with opposition parties next week to discuss his proposals.

But the main focus this week will be the Federal Reserve and Jerome Powell’s speech on Friday when he’s expected to signal whether or not another rate cut is forthcoming at the September meeting and the pace of easing thereafter. Powell and his colleagues will be heading to Jackson Hole, Wyoming on Thursday for the annual gathering of central bankers.