It might be another troublesome week for the euro as initial Eurozone PMI readings for the month of August could enhance the case for a heavier stimulus package by the European Central Bank. The reaction in the euro however will depend on the level of monetary easing investors have already priced in, with the Fed’s Jackson Hole and the G7 meetings affecting traders’ sentiment as well.

On Thursday at 0730 GMT the IHS Markit survey is likely to report further losses for the already struggling manufacturing sector, with the flash manufacturing PMI anticipated to edge down from 46.5 to a new 6 ½-year low of 46.2 in August. Presumably, Germany is driving the weakness as the giant car exporter has found itself trapped in a fierce trade war that two of its main trade partners are playing. Last week’s Q2 GDP contraction underpinned by a plunge in export activities is the latest evidence that producers are in a worrisome situation, with the German central bank foreseeing further weakness in the third quarter and the government making plans to aid the economy. 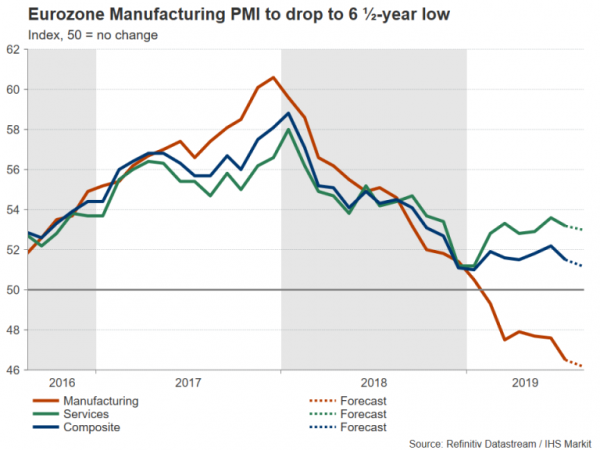 Turning to the services PMI, the data which are affected by the consumer buying behaviour may attract special attention after July’s headline Harmonized CPI inflation was revised lower on Monday, highlighting the lack of demand. The index is projected to fall by 0.2 points to 53.0 and despite holding above the 50 mark that separates contraction from expansion, investors worry that the growth-leading industry may not be able to keep offsetting the damage in factories for long if the US trade protectionism and Brexit uncertainty heighten in the year ahead. Theoretically this could develop indirectly through the labour market, with businesses stopping or easing hiring to avoid any cost increases, forcing consumers to reduce spending on goods and services in the aftermath.

Even though the European Central Bank (ECB) is not very thrilled to be loosening monetary policy, policymakers must catch up with reality. Besides Brexit and the US trade protectionism that may harden against the EU if Brussels denies softening trade regulation to American firms, Italian politics is another headache that is getting more painful. The Italian Prime Minister, Giuseppe Conte resigned on Tuesday after the persisting disagreements between the fragile coalition of the League and the Five Star Movement (M5S) parties gave opportunity to the League leader, Matteo Salvini, who recently saw his popularity multiply, to call for snap elections. The confidence vote scheduled for Tuesday did not happen following Conte’s resignation and whether Salvini will take the leadership remains to be seen as a reconciliation between the League and M5S cannot be ruled out In case the opposition parties fail to reach an agreement and Salvini wins a snap general elections, the EU could have a bitter battle over the 2020 budget as Salvini is seeking to cut taxes by raising the deficit. 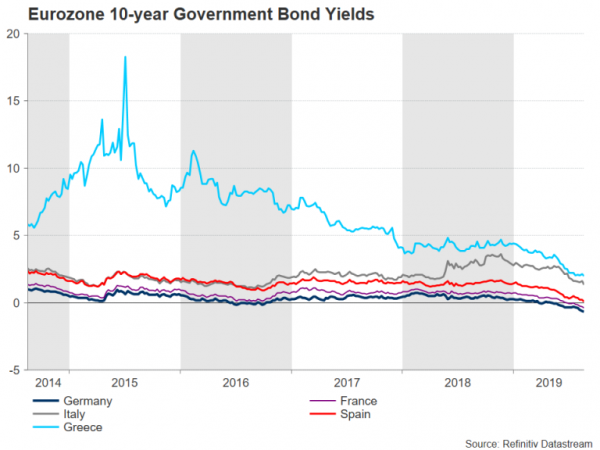 In response, the ECB is widely expected to cut interest rates by 0.10bps to -0.5% in September and restart its asset purchase program that was terminated in December, something the minutes from July’s gathering could confirm on Thursday. However, the recent comments by the ECB policymaker Olli Rehn increased speculation that the Bank could deliver a larger stimulus package as uncertainty has risen to new levels since July’s meeting. Yet, since the room for further rate cuts is already limited, the ECB could become more creative on the QE front as purchases of 10-year sovereign bonds that have a negative yield such as the German and the French ones might not be an effective strategy. Note that the ECB is buying assets based on the size of the economy, though the rules prevent the Bank to hold more than a third of any EU member’s debt. Hence any QE headlines will be closely watched in the coming months.

In FX markets, traders are certain that the next move in monetary policy will be supportive to the EU economy, though what they are still trying to figure out is how dovish will the ECB appear later in the year. If Thursday’s PMI data disappoint, hinting a more cautious ECB policy meeting in September than markets expect, EURUSD could break recent lows and drop into the 1.1026-1.0950 area.

Yet, moving ahead in the week, the Fed’s Jackson hole annual symposium on Friday, and the G7 meeting on August 24-26 could disrupt the euro’s performance in coming sessions. Should the Fed set the stage for a sharper rate cut in the next policy meeting, EURUSD could find some footing on the back of a weaker dollar and enter the 1.1160-1.1230 region. Early next week, positive trade discussions at the G7 summit could potentially bode well for the euro as well.