The UK’s FTSE 100 index is poised to have the worst monthly performance since 2015 , thanks to Boris Johnson- the UK’s Prime Minister. The index is down over 6% this month. There is no light at the end of Brexit tunnel and the person in charge of Brexit has made the situation more difficult than ever. The sad fact is that it can become a lot more worse if it continues like this. 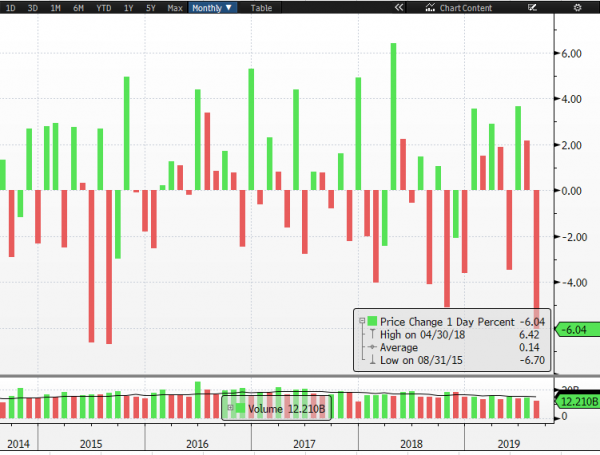 Today’s market action is all about one particular event, Jerome Powell’s speech at Jackson Hole. The inverted yield curve is back and this is due to the fact that investors do not believe that the Federal Reserve is going to provide any substantial support for the equity markets. The argument does have strength, three of the Fed members have turned hawkish. They need evidence for more stimulus. The Fed’s chairman’s job has become more arduous.

So the question is what to expect from him today when he takes the stage?

Well, I do believe that he’s going to leave the option on the table for another 25 basis points cut during the next month, and perhaps, curtail some of the hopes for further rate cut for the rest of the year. This alone won’t be enough for him to restore the confidence. I do not think the issue of negative or inverted yield is going to be solved by this.

He needs to walk on a very fine line today with respect to the monetary policy and that may restore confidence. The only way to achieve this is by keeping the door open for the possibility of further rate cuts if needed for the rest of the year. But he also need to shake off too much of dovish hopes. This is because you can’t give a message to the market that every time he is standing on the podium the market should be expecting another rate cut.

This would not be a healthy option for the economy in the longer term, and quite honestly, the economic data doesn’t really allow that as well.

Germany’s Bundesbank has pushed back against the hopes of fiscal help. The bank thinks that the German economy doesn’t need fiscal spending and this has pulled cold water on all the expectations which were around this. Obviously this puts more pressure on the European Central Bank to do more in order to spark the growth in the eurozone. We already know their ammunition doesn’t have the same sort of power that it had in the past.

What does the G 7 meeting mean for the markets?

Another event which investors are also vary of is the upcoming G 7 meeting taking place this weekend. Investors are going to look at this event from different angles.

Firstly, how Donald Trump is going to interact with other G 7 leaders, specifically Germany, and if this can result in a tweet which can heighten the geopolitical tensions between the USA and Germany.

Secondly, after the recent oil ship event in Gibraltar, if Donald Trump is going to leave the door open for special relationship between the UK and the US?

Thirdly, if Donald Trump is going to use this opportunity to create a further wedge among the EU members. We know that in the past he has made Germany look like a villain among the EU countries.

Finally, if Boris Johnson is going to use this opportunity to speak with Italian, French and German lawmakers and try to pitch his version of Brexit. So far, his Brexit strategy has failed to gain any attraction among the EU leaders. For them, the UK’s Prime Minister doesn’t have a clear strategy or any clue how to resolve the Irish backstop problem. Therefore, do not expect anything major on the bright side front over this weekend when it comes to the G 7 meeting.