The USD moved in a tight range against a number of other currencies yesterday as the market awaits Fed Chairman Powell’s speech at Jackson Hole. The speech is expected to be of high profile and markets will be closely watching over any clues about the Fed’s intentions as another rate cut is already priced in. Analysts tend to mention that the Fed’s Chairman is about to maintain the message of the Fed not entering a prolonged period of easing. Argument for such a scenario include, that the bank had described the July rate cut as an “insurance” cut, which was supported by the release of the Fed’s minutes. On the flip side, risks are more elevated for the US economy than at the end of July and some analysts are pointing out the recent inversion of the US treasury yields as a clear sign. Should the Fed’s Chairman not be as dovish as the markets expect, we could see the USD strengthening, otherwise the USD could weaken. EUR/USD dropped somewhat during the Asian session today, distancing itself from the 1.1100 (R1) resistance line. It should be noted that the pair failed to maintain the gains made during yesterday’s European session, due to the Eurozone’s improved PMI readings for August, which briefly had pushed above the 1.1100 (R1) resistance line. We could see the pair experiencing extended volatility today as Powell’s speech at the Jackson symposium and at the current stage seems to have some bearish tendencies. Please bear in mind though, that the event could push the pair to either direction. Should the pair’s long positions be favoured by the market, we could see the pair breaking the 1.1100 (R1) resistance and aim for the 1.1140 (R2) resistance level. Should the pair come under the market’s selling interest, we could see it breaking the 1.1050 (S1) support line and aim for the 1.1000 (S2) support level.

The pound jumped after German Chancellor Merkel stated that a solution to the Irish border issue could be found before the Brexit deadline. The pound had remained at a 2 year record low levels in the past three weeks as the prospect of a hard Brexit weighed. Analysts point out that with investors having heavy short positions for the pound, any breakthrough on the Brexit issue, boosts the pound. On the flip side French Prime minister Macron stated, “we are really not any closer at finding a solution”, practically dampening expectations. We expect volatility to continue for the pound and any profits may prove short-lived, unless there is a fundamental change on Brexit. Also please bear in mind that the pair could be affected by Mark Carney’s speech at Jackson Hole later today, or a possible meeting between Trump and Boris Johnson during the weekend. Cable jumped yesterday breaking the 1.2135 (S2) and the 1.2210 (S1) resistance lines, now turned to support. We expect the pair to continue to correct lower, yet it should be noted that Powell’s speech could affect the pair’s direction, should there be no further substantial Brexit developments. Should the bears be in control of the pair’s direction, we could see it breaking the 1.2210 (S1) support line and aim for the 1.2135 (S2) support level. Should on the other hand the bulls take over once again, we could see the pair breaking the 1.2290 (R1) resistance line and aim for the 1.2370 (R2) resistance level.

Today during the American session besides Powell’s speech, we get Canada’s retail sales growth rates for June, the US new home sales figure for July and the Baker Hughes oil rig count. In Monday’s Asian session we get the New Zealand’s trading data for July. Also please bear in mind, that during the weekend the G7 meeting is taking place in France. Should there be any headlines about the US intentions to impose tariffs on European cars we could see the common currency being affected at its Monday opening. 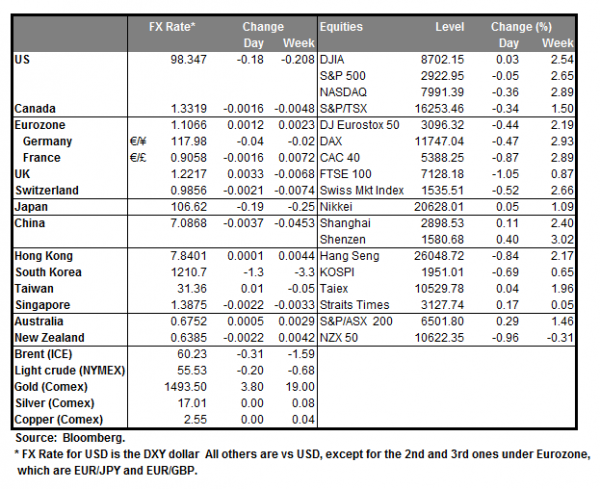