This week may have been short on economic data, but the fireworks were lit on Friday as the President lashed out against China and the Fed Chair in a series of tweets, sending stock markets into a tailspin. The main event was meant to be the Fed Chair’s Jackson Hole speech earlier in the morning, but an imminent announcement from the White House on the China-U.S. trade front stole the spotlight.

Earlier this week, the Fed’s minutes revealed that while the majority of the FOMC members supported the July rate cut as a “prudent step from a risk-management perspective,” there was a diversity of views among members. We already knew that two voting members dissented, but the minutes showed that those in favor of cuts citing different reasons for monetary easing ranging from low inflation to headwinds from trade tensions and insurance against slowing global growth.

Rather than abating, those risks have increased since July. Today, China responded to the U.S.’s latest tariff escalation by announcing 5%-10% on the remaining $75 billion of the U.S. imports. While the 10% tariff doesn’t seem like it would kick the chair out from under the global economy, as we argue in our recent report, this recent tit-for-tat escalation between China and the U.S. may be the last straw that damages business and market confidence beyond the point of no-return.

In concert, the global outlook has darkened since the Fed’s last meeting. Global growth is now tracking 2.9% – the slowest pace in a decade (Chart 1). Global manufacturing PMIs have remained weak, and geopolitical risks, such as the no-deal Brexit, have intensified. Consumer sentiment levels in Europe are also low, consistent with levels that have historically preceded a recession. All in all, there is little surprise bond markets continue to flash warning signs, with the spread between the 10-year and 2-year Treasuries briefly turning negative again this week.

These recent unfavorable developments were reiterated by Chair Powell in his Jackson Hole speech. Powell also reminded the audience about lags in monetary policy and stated that the Fed “will act as appropriate to sustain the expansion.” He indicated that he is not overly worried about the risks of a pick-up in inflation, or excesses building in the financial system, seemingly removing two arguments against further rate cuts. Given slower global growth and the intensification of trade risks since our last forecast, we anticipate two additional cuts will be needed this year to cushion the economy. There wasn’t anything in Powell’s speech to suggest that the Fed won’t act in the face of a deteriorating outlook.

In the one economic footnote to a week that is ending dramatically, the existing home sales data was positive. Sales rose 2.5% to 5.42 million in July and are now up 9.9% from their trough in January, evidence that the more than 100 basis point decline in mortgage rates is helping to revive demand (Chart 2). 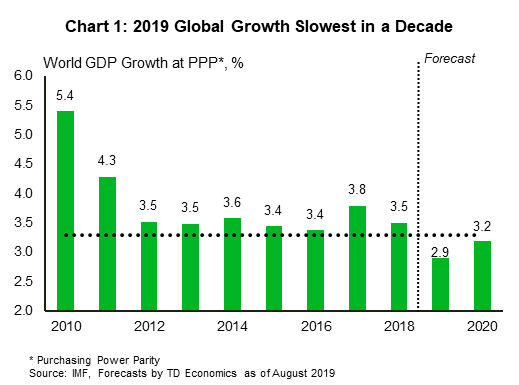 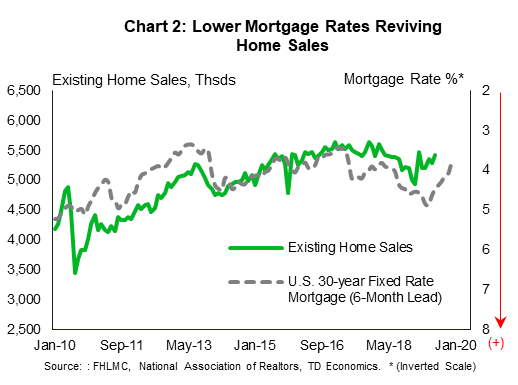 This week brought a smorgasbord of Canadian economic data ahead of next week’s quarterly GDP report, and, of course, a cavalcade of external developments. On the domestic side, the manufacturing sales report kicked things off. Beneath a price-driven headline drop of 1.2% (m/m) was a more modest volumes decline of just 0.2%. Gains in durable goods industries helped limit the impact of declines elsewhere, and, for the second quarter as a whole, sales were up 1.8%– the healthiest climb since early 2017.

The relatively less watched (but still important) wholesale report painted a somewhat positive picture for June, with sales volumes up 0.6% on the month, and 1.2% for the quarter. Both reports suggest healthy GDP growth for the second quarter, but also some risk going forward. This is because, despite healthy sales, inventories continue to climb (Chart 1). Normalizing these levels could come from rising sales, but also from slowing production, leaving these sectors an important domestic risk going forward.

On the subject of risks, today’s retail sales report was, on its face, a pleasant surprise. In dollar terms, retail sales were flat, weighed down by weak auto sales, but even this was better than markets had been anticipating. Even better, volumes were up 0.4%, providing solid momentum heading into the third quarter. But, if we dial the lens back, the longer-term picture remains concerning. Volumes were up just 0.1% in Q2 and have struggled to grow over the past year despite robust population growth (Chart 2). This suggests that consumer caution is outweighing otherwise solid fundamentals, consistent with ‘headline’ risk (i.e. reining in spending in the wake of trade wars/recession risks).

These fundamentals bring us to the final major data release: inflation. Price growth held at 2% year-on-year in July for both the headline measure and the ‘core’ measures that strip out noise in the data. Combine this with second quarter growth likely to come in at 3.3% annualized (see our preview), well ahead of the Bank of Canada’s 2.3% tracking from last month, and you would be forgiven for wondering why so many headlines have focused on the risk of the Bank of Canada cutting its interest rate.

The answer lies in this week’s generally negative external developments. As noted in our Chief Economist’s latest perspective, the global economy may be facing a ‘Kerplunk’ moment where the latest round of tariff escalation sends the proverbial marbles tumbling down. Indeed, this morning saw another round of escalation as Chinese authorities unveiled their response to President Trump’s latest tariffs, and Trump responded with a string of tweets including an apparent order for American firms to find alternatives to China. So, the rear-view mirror may be showing a rebound of growth, but the road ahead continues to crumble. A rate cut likely requires the Bank of Canada shifting from data dependency to risk management mode, which means a change in communication. This puts the likelihood of a September rate cut near zero, but if past precedent is anything to go by, expect a (post-2019) forecast downgrade from the Bank this fall, leaving the risks tilted towards easing. 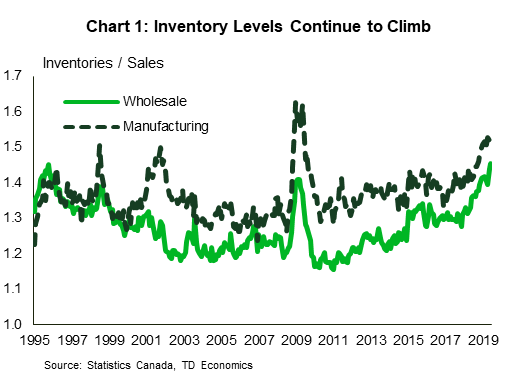 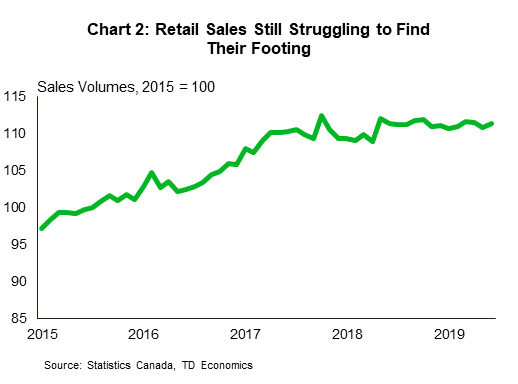 We anticipate spending to have advanced at a strong 0.5% m/m pace in July, up from a 0.3% in June. In the details, we expect a 0.5% m/m increase in services spending to be the main driver of the July gain, with a rise in spending on nondurables (+1%) also helping on the headline. Both advances should more than offset our forecast for a minor decline in spending on durable goods. Moreover, we forecast income to rise 0.1% m/m, mean-reverting from the solid 0.4% jump in June. 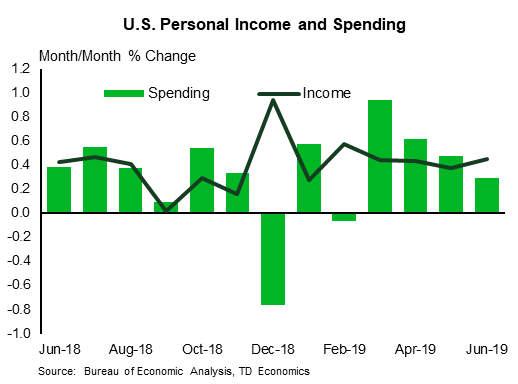 The Canadian economy likely turned in a solid performance in the second quarter, with our final growth tracking 3.3% (q/q, annualized). Much of the acceleration can be put down to two key areas. The first is international trade, where a solid advance in exports (+10.7%) is expected, alongside a contraction in imports (-0.5%). The second is residential investment, which is expected to break its five-quarter contractionary streak with a 12% gain, helped by robust gains in both resale and construction activity. Elsewhere, more modest performances are likely. Non-residential business investment is expected to advance just 1.2%, but this comes after a machinery and equipment-led gain of 10% in the first quarter. Consumption is forecast at 1.4%, with a contraction in durable goods spending (largely autos) the key headwind.

Industry-level GDP is forecast to increase by 0.2% in June for the second consecutive month – though the balance of risk skews to the upside. Energy production will be a key source of strength after Alberta further eased its oil curtailments at the start of the month, and we also expect to see a boost from residential construction after June saw record multi-unit starts and a sharp increase for hours worked for the industry. Softer manufacturing figures will only provide a partial offset. With slowing growth, the hand-off into Q3 will not provide same sort of tailwind that benefitted the Q2 figures, and with trade tensions and market anxiety ratcheting higher in July and August there is significant risk that the economy will decelerate further in the months ahead. 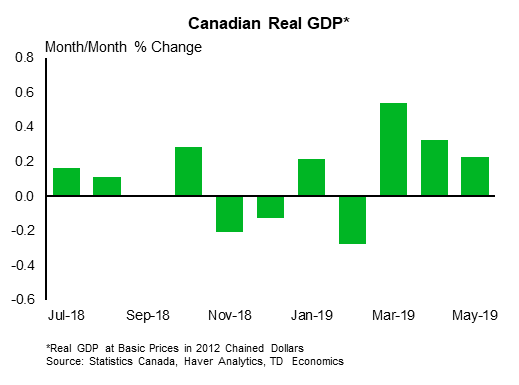