As new tariffs took effect on Sunday, markets started out the week on a dour note. Adding to this negative tone was the release of manufacturing surveys on Labor Day that signaled that a global manufacturing recession was gaining momentum (Chart 1). The ISM Manufacturing survey released the next day confirmed that even U.S. purchasing managers felt that activity has slipped into contraction in the U.S. in August, for the first time in three years.

However, market sentiment quickly turned positive on news that trade talks were back on between the U.S. and China. Scheduled for October, the hope is that the two nations will at least agree to a ceasefire like that of last December, thereby deescalating trade tensions somewhat.

Other data released later in the week further supported this positive shift in market sentiment. ADP payrolls for August suggested a bigger gain than consensus expected. Moreover, the ISM Non-Manufacturing index signaled that service industry sentiment was better than expected given the building downside risks. This was not entirely surprising given how strong consumer spending has been despite recession fears and tariffs.

Not all data proved as positive. Payrolls advanced 130k in August, a decent headline print, but boosted by census hiring of 25k. Private payrolls advanced only 96k in the month, well below the January-July average of 152k. Other details of the report were better. The core age employment-to-population ratio hit a new post-crisis high of 80%, aided by a new high reached in the ratio for women (Chart 2). And, wage growth remained healthy, holding steady at 3.2% year-on-year pace.

Taken together, the improvement in risk appetite and commodity prices this week gives a sense that all is well. The latest tariff escalation and plunge in manufacturing sentiment was largely shrugged off. But, relying solely on financial market signals to get a sense of where economic growth is headed would be foolish given the number of unresolved downside risks.

Global economic momentum has faltered this year. 2019 growth is expected to be the lowest in a decade. Even with more supportive financial conditions forthcoming, the scope for a big rebound in economic activity circa 2016 is limited. Adding threats of U.S. tariffs on European imports this fall and the potential for even higher tariffs on Chinese imports to the mix reinforces our view that global economic growth is just treading water.

On the domestic front, business investment is expected to remain subdued as trade policy uncertainty persists. Few CEOs would push forth with plans to expand capacity or sales abroad when supply chains remain uncertain. Such an operating environment calls for more spending by policymakers to help shore up sentiment as well as to offset the negative economic effects of uncertainty. Looking ahead to next year, the budget deal struck by Congress this summer should support growth. Add two more rate cuts by the Federal Reserve for a total of 75bps of easing this year, and it just might be enough to sustain the expansion for another year. 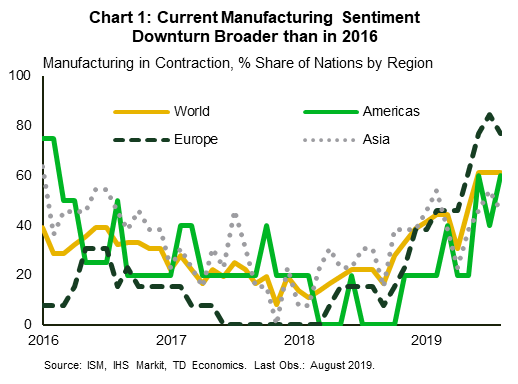 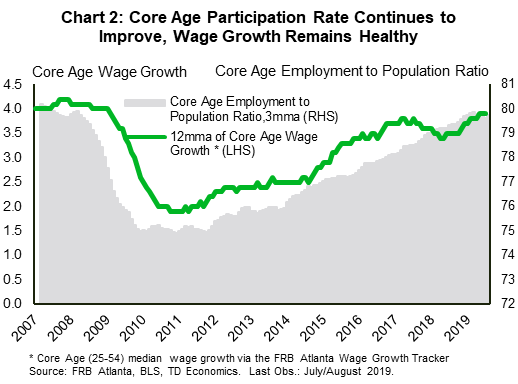 The Bank of Canada left the overnight rate unchanged this week at 1.75% and delivered a balanced statement that underwhelmed financial markets expecting a more dovish tone. Combined with a solid jobs report on Friday, this pulled up yields and the Canadian dollar, which, as of writing, ended the week up nearly 1% against the greenback.

The Bank of Canada statement put escalating U.S.-China trade tensions right up front and noted that it had led to a deterioration in “global economic momentum.” At the same time, it recognized that U.S. growth remains “solid” and Canadian economic data has come in above expectations. Perhaps most notably, the statement gave very little in the way of forward guidance and maintained its insistence on monitoring incoming economic data.

This makes some sense. The central bank’s job, like our own, is increasingly difficult in a world economy mired in extreme uncertainty. In such a world, one is limited to extrapolation based on recent events and the leading indicators available in financial and economic data. The financial indicators (such as the U.S. yield curve) that are flashing recessionary signals are clouded by structural changes and central bank bond purchases. The global economic data, meanwhile, is signalling a slowdown and a pullback in manufacturing in much of the world, but this has is not yet trickled into the larger service sector, especially in North America.

For the Bank of Canada, balancing domestic data with global, the situation is even more complicated. As noted, Canadian data has come in ahead of expectations. One can point to the temporary nature of the outsized 3.7% (annualized) gain in real GDP in the second quarter, but its harder to ignore the turnaround in the housing market (where this week’s local realtor board data continued to point to rebounding activity in Toronto and Vancouver in August) or the trend in job growth. In August, the year-on-year pace of employment growth hit 2.5%, the strongest rate since 2007 (Chart 1).

Still, the central bank cannot get away from making predictions about the future. And there are some things we can say about it with a fair degree of confidence. First, a weakened global economy will feed back onto Canada. The Bank’s monetary policy report has consistently recognized this fact and has just as consistently raised its estimated negative impact of global uncertainty on Canadian exports and investment (Chart 2). Second, a weak economy is more vulnerable to unforeseen shocks than one with a full head of steam. These could come from one of the likely suspects (no-deal Brexit) or from something as of yet completely unforeseen. Third, trade disputes are unlikely to go away and even if de-escalation occurs, the uncertainty created by them will remain a constraining factor on economic growth.

Taking these together, we expect the Bank of Canada to reduce its forecasts for Canadian economic growth in October and to follow the chorus of global central bankers cutting interest rates in order to maintain the economic expansion. 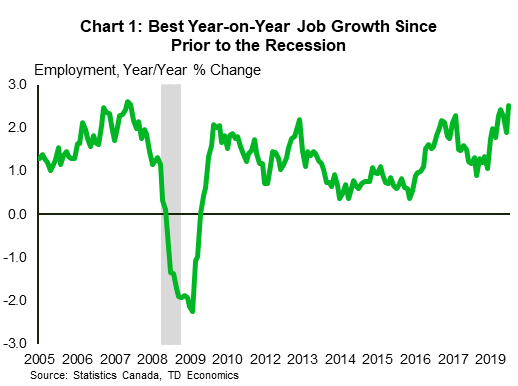 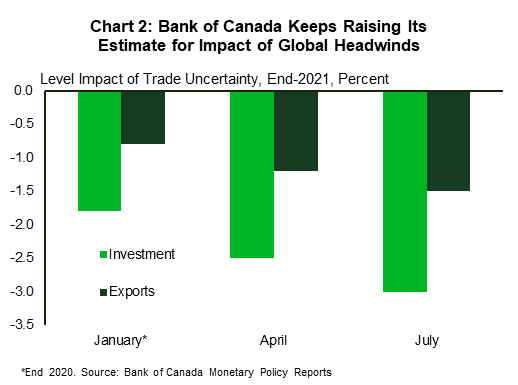 We look for headline CPI to slow a tenth to 1.7% y/y in August (flat m/m) on the back of a notable decline in energy prices. Indeed, we expect the non-core segment to be dragged by a 4.5% m/m tumble in August gasoline prices. Conversely, core inflation should tick up a tenth to 2.3% y/y, reflecting a firm 0.2% m/m advance — though slightly softer than in Jun-Jul as core goods inflation was likely flat m/m. That said, a steady 0.2% m/m gain in services should support core CPI. We anticipate OER to advance at 0.3% m/m and for the ex-shelter segment to slow modestly on a monthly basis. 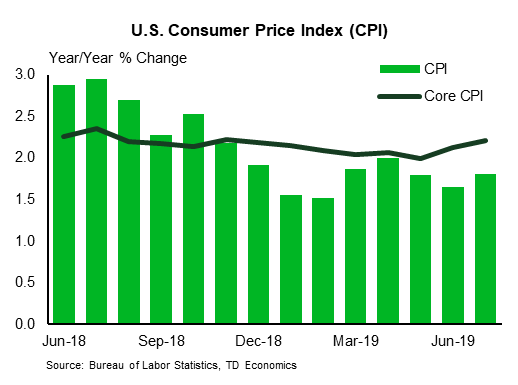 We expect another firm increase in sales in the key control group (+0.4% m/m) to be the main driver behind a 0.3% headline gain in August as consumer fundamentals remain sound (a still-healthy labor market, solid real wages and firm confidence levels). A steady increase in core sales and a small rebound in auto purchases should more than offset a decline in sales at gasoline stations, which reflects a notable drop in gasoline prices in August. 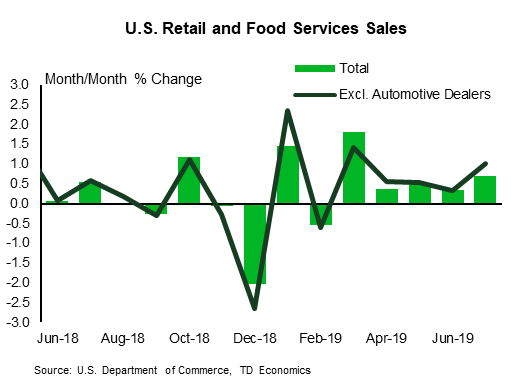 Housing starts are forecast to rebound to a 230k pace in August on a partial recovery in both multi-unit and single family construction. Weather conditions in August were more favourable for construction after heat waves in the prior month, and recent signs of life in the resale market along with lower rates should also help support development. Annualized starts of 230k in August would push the six-month trend back to 220k – the highest since June 2018 – and help to support residential construction over the coming quarters. 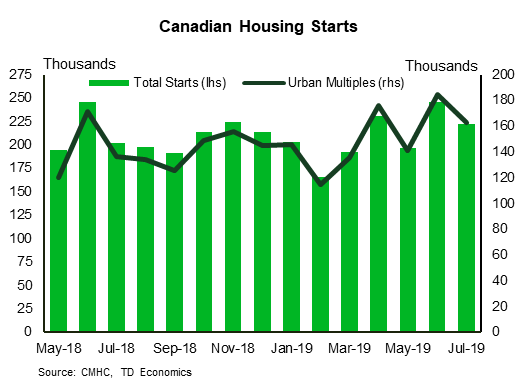