All eyes are expected to be on the Fed, which is to release its interest rate decision today at 18:00 (GMT). The bank is expected to cut rates by 25 basis points, lowering them to +2.00%, from current +2.25% and Fed’s funds futures imply a probability of 62.2% for such a scenario currently, much lower than at the beginning of the month. It should be noted though that the event is to also include the renewed dot plot, the new economic projections of the bank, the accompanying statement and a press conference by Jerome Powell later on (18:30, GMT). Should the bank indicate that it is not expecting further cuts or delays further cuts after 2019, we could see the USD getting some support as the markets seem to have already priced one more rate cut in December. The event is expected to increase volatility for the USD and if the bank acts against the markets’ dovishness we could see the USD strengthening. EUR/USD rallied yesterday, breaking the 1.1050 (S1) resistance line (now turned to support). We could see the pair experiencing increased volatility due to the release of the Fed’s interest rate decision. Should the bulls dominate the pair’s direction once again, we could see it breaking the 1.1105 (R1) resistance line and aim for the 1.1160 (R2) resistance level. Should the bears take over, we could see the pair breaking the 1.1050 (S1) support line and aim for the 1.1000 (S2) support level.

During tomorrow’s Asian session, albeit at tentative time Bank of Japan is to release its interest rate decision. The bank is expected to remain on hold at -0.1% and currently JPY OIS imply a probability of 91.7% for such a scenario. The anemic inflation rate, troubling the Japanese economy and the planned sales tax hike suggest that the bank could be holding a dovish stance. On the flip side, a recent easing of the pressure on BoJ to act combined with some easing in the US-Sino trade tensions could be suggesting a more neutral stance by the bank in its decision. Please bear in mind that BoJ’s Governor Kuroda mentioned a number of times, that a cut of the already negative interest rate is in the bank’s arsenal. Also recent headlines showed that BoJ officials think that lowering the already negative interest rate in the coming months, wouldn’t backfire in financial markets because investors are aware of that possibility. Should the bank sound more dovish than what the market expects we could see JPY weakening. USD/JPY after its rise on Monday maintained a sideways motion yesterday near the 108.35 (R1) resistance line. We expect the pair to experience a double effect as both interest rate decisions mentioned above could affect it. Should the pair come under the selling interest of the market, we could see it breaking the 107.75 (S1) support line and aim for the 107.20 (S2) support barrier. Should the pair’s long positions be favored by the market, we could see it breaking the 108.35 (R1) resistance line and aim for the 108.90 (R2) resistance hurdle.

In today’s European session, we get UK’s inflation rates for August and Eurozone’s final HICP rate for August. During the American session, we get the number of US building Permits for August, Canada’s inflation rates for August, the EIA weekly crude oil inventories figure and later on the FOMC’s interest rate decision. During tomorrow’s Asian session besides BoJ’s interest rate decision, we get New Zealand’s GDP growth rate for Q2 and Australia’s employment data for August. Please bear in mind, that today during the European session, European Commission President Jean-Claude Juncker is scheduled to address the plenary of the European Parliament on Britain’s withdrawal from the European Union and could create volatility for the pound. 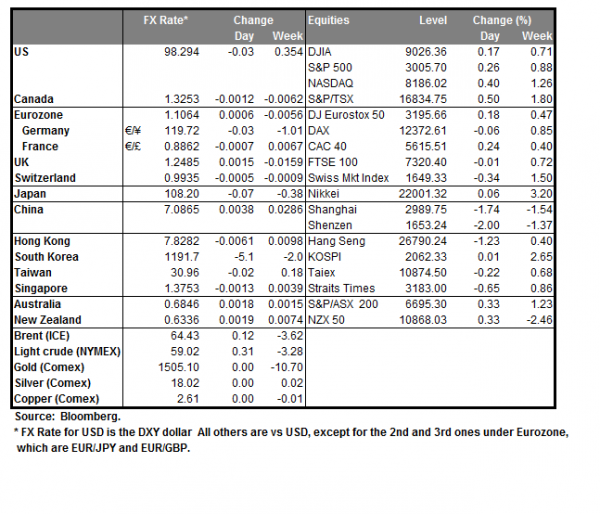