The pound jumped against the USD yesterday, as media reported that EU Commission President Juncker stated in an interview that a deal for Brexit is possible by October 31. Also according to media, the EU Commission president stated that a no deal Brexit would be catastrophic and is working hard to prevent it. Analysts tend to note that the pound’s move could be sustainable should there be further evidence towards a Brexit solution. Media also report that Irish Prime Minister stated that he would be meeting with Boris Johnson in New York next week “try to get a deal”. On other news, the Supreme court ruling about the legality of the suspension of the UK Parliament could be out early next week. It should also be noted that the Bank of England remained on hold yesterday, as was widely expected, yet policymakers sounded less optimistic than other times. We could see the pound strengthening if there are further positive headlines about Brexit. Cable jumped yesterday breaking the 1.2510 (S1) resistance line, now turned to support. We could see the pair maintaining an upward movement as it broke above the prementioned trendline escaping the formed triangle. Should the pair find fresh buying orders along its path, we could see it breaking the 1.2590 (R1) resistance line and aim for the 1.2665 (R2) resistance hurdle. Should cable come under the selling interest of the market, we could see it breaking the prementioned upward trendline, the 1.2510 (S1) support line and aim for the 1.2400 (S2) support level.

US and Chinese resume face to face talks

US and Chinese representatives met again yesterday, after about two months for face to face negotiations about the US-Sino trade relationships. Currently negotiations between the two delegations are to be extended into Friday and are being conducted at mid-level. The negotiations are to cover agricultural issues as well as intellectual property issues. It should be noted that US economic advisor Larry Kudlow told Fox news that “there’s a little softening in the air” sparking hope for some progress. On the flip side, Chinese media seem to still be advising caution as Beijing may maintain a tough stance. Should the outcome show further progress, we could see safe havens weaken, while at the same time the AUD and NZD may find some support. AUD/USD continued to drop yesterday breaking the 0.6800 (R1) support line (now turned to resistance), yet during the Asian session today seemed to show some signs of stabilization. For our bearish outlook for the pair to change, we would require the pair clearly to break the downward trendline, incepted the 18th of the month. Should the bears continue to dominate the pair’s direction, we could see it breaking the 0.6740 (S1) support line and aim for lower grounds. Should the bulls take over, we could see the pair breaking the downward trendline, the 0.6800 (R1) resistance line and aim for the 0.6860 (R2) resistance hurdle.

In today’s European session, we get Germany’s PPI rate for August. In the American session, we get Canada’s inflation rates for July and Eurozone’s preliminary consumer confidence indicator for September. Later on we get from the US the Baker Hughes number of active oil rigs in the US. During Monday’s Asian session, Australia’s preliminary manufacturing PMI for September. As for speakers, please note that Boston Fed President Eric Rosengren and Dallas Fed President Kaplan are scheduled to speak today. Also some media NY Fed President Williams is to speak in Switzerland today, but the session could be closed to the press, so there may be less headlines there. Instead we tend to concentrate on Rosengren which dissented in the last FOMC meeting favouring rates to remain unchanged. 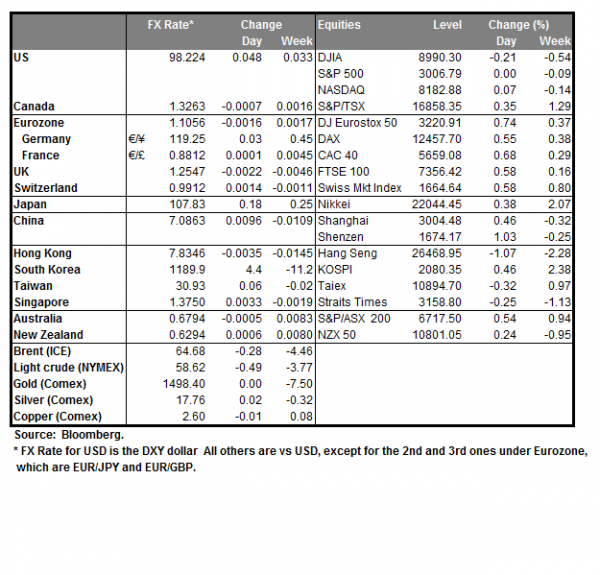