Stock markets across Europe are marginally lower as we head into a more peaceful end to the week, one that has been dominated by central banks around the globe. 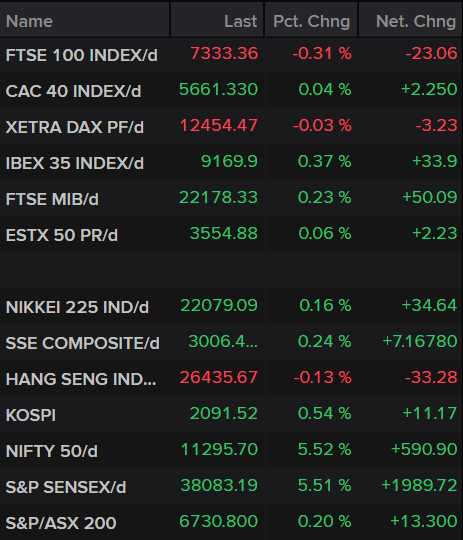 The pound has jumped at the end of the week after outgoing European Commission President Jean-Claude Juncker sounded optimistic about the prospects for a Brexit deal. This came after Johnson gave a new proposal to Juncker that he believes could break the deadlock and at least gave the impression that the commission will consider alternative ideas.

Unfortunately, this late in the day, it’s still unlikely that a new agreement can be reached without an extension. Perhaps that’s why officials on the EU side are making a conscious effort to sound more open to a deal, as they don’t want to fall into the trap of sounding dismissive and being blamed for any no-deal eventuality, which plays into Boris’ hands.

For now, traders are optimistic that no-deal is possibly less likely than it was, thanks to the bill passed in the British Parliament. The Supreme Court ruling may not make much of a difference, should they rule against Johnson’s prorogation, but we should learn more today. Traders are clearly less pessimistic than they were but this is a wild ride and there’s plenty more surprises still to come.

It’s been a bit of a flat week as far as gold is concerned. The Fed meeting failed to shock it back to life, despite the hawkish nature of the rate cut and a dot plot that failed to signal any more by the end of 2020. Perhaps traders lack of confidence in the dot plot at this stage can explain that but it leaves gold roughly where it started the week.

It continues to look vulnerable to a break of $1,480, with any rallies being quickly sold into. A break of this key support could trigger a sharper decline, with $1,450 looking interesting below. A further drop towards $1,400 could be on the cards though if $1,480 falls.

Oil prices are a little higher on Friday but in the grand scheme of things, it’s basically stabilising after quite the volatile week. We’ve seen no further escalation or retaliation which is a relief but a risk premium is continuing to be priced in after the attack highlighted the vulnerability of the Saudi facilities. Given the spike on Monday, I wonder whether we’ll see any additional nerves as we head into another potentially eventful weekend.