Investors shrug off latest US threats

It’s been a steady start to trading on Monday, as investors weigh up recent trade war reports and eye events later in the week. 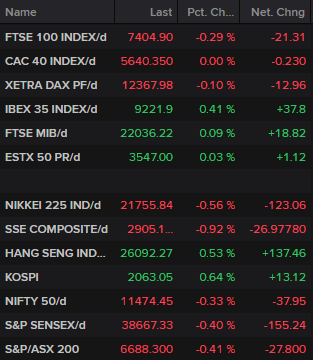 The opening hours of the week have been data heavy but there hasn’t exactly been any knockout releases, with many of the numbers just confirming what we already know. UK growth in the second quarter was confirmed at -0.2%, leaving the country at risk of recession, although most agree that’s unlikely to materialize and it broadly driven by first quarter stockpiling.

Chinese data overnight was a little more upbeat, with PMI survey’s for the manufacturing sector exceeding market expectations and the non-manufacturing number was a very healthy 53.7. I don’t think anyone is getting carried away though, the trade war has seriously taken its toll and the September data doesn’t change that.

It seems every time we take a step forward with the trade war and optimism rises ahead of a meeting between the two teams, we get some negative headlines. This time it was threats to delist Chinese companies and limit US pension funds investments in Chinese markets. We are becoming used to threats ahead of these talks but any follow through here would be rather dramatic.

Gold is heading south and $1,480 may be in trouble. This isn’t the first time that this level has been tested and you don’t have to be a technical analyst to see that a break of it could be damaging. Gold bulls may be feeling a little nervous at this point, especially as investors may be doubting themselves about another Fed rate cut this year. It’s still backed but there doesn’t appear to be the same desire to force it, as there has been the last two meetings.

It’s been a stunning summer for the yellow metal, as central banks have gone full easing once again. The evenings have been getting a little darker though in recent weeks just as gold has lost its shine and the next few weeks could get darker still. A break of $1,480 will draw attention back to $1,450 but the correction could be deeper still. 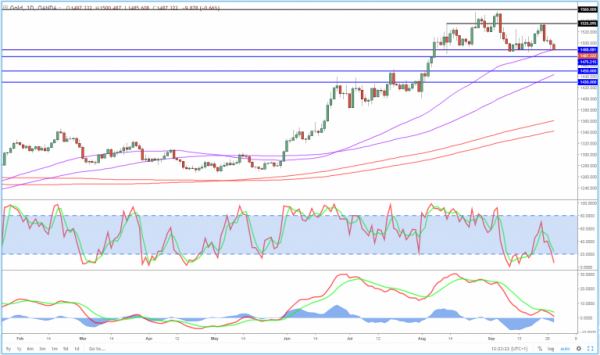 Oil has been amazing everyone over the last couple of weeks, having surged on the back of the attack on the Saudi oil facilities before reversing the entirety of these gains, despite the country temporarily losing half its output. The way in which the gaps have been filled in Brent and WTI is basically textbook but the decline may not be over just yet.

Traders are clearly not particularly concerned about risk premiums in oil, despite what we’ve seen. Instead, the focus again seems to be shifting back to the demand dynamics and the risk of further downgrades as the global economic slowdown takes hold. 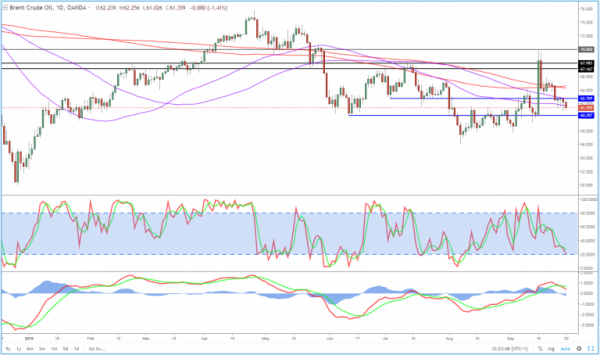