The Best Time To Short Sterling?

The devil is in details and Boris Johnson is only trumpeting immature success. The reality is that the current deal is only marginally better than the old deal—if that. This agreement could have been achieved two years ago if it wasn’t the reckless behavior of politicians. It has cost the UK’s economy a tremendous cost.

Both the UK and the EU have agreed to scrap the controversial “backstop” agreement. But the intriguing element is that Northern Ireland is still tied to the EU’s tariffs and customs rules—the only possible way to not have the physical border. Remember, this was the position of the EU from day one. Brexiters always opposed to this decision in the past because, for them, it was humility. In other words, the British lawmakers have made Brexit a complete circus—something which we have pointed out repeatedly.

The reason that we think that the deal isn’t going to go anywhere is that the DUP announced its disagreement soon after Boris said that a deal has been reached and Sterling soared on the back of this. In addition, the opposition leader, Jeremy Corbyn also labeled it as a “sell-out” and now we have a situation where both, the opposition leader and the DUP leaders, aren’t going to support this in parliament. Basically, this deal is dead in water—highly likely scenario—and we are going to return to the drawing board.

Sadly, traders aren’t going to get much pleasure to enjoy the Friday feeling or get any sleep over this weekend because of the chaotic Brexit situation. We think this could be a chance to go short on Sterling. If the deal is rejected in Parliament, Sterling is likely to fall off the cliff due to a no-deal Brexit threat. On the flip slide—only if a miracle happens—the deal gets green light in parliament, the Sterling-dollar is going to shoot above the 1.35 mark—something we said yesterday.

US futures and European markets are trading sharply lower as traders are dismal because of the feeble GDP number out of the second biggest economy of the world, China. Its economy grew 6% during the third quarter and missed the forecast of 6.1%. Something which has spooked investors is that they have not seen this sort of economic growth for China in nearly three decades (precisely, 27 years and half years). The print for the third quarter was also weaker than the previous one. This has anchored pessimism among traders that the world economy is marching towards a major disaster because China and the US are embroiled in a trade war. Sadly, there are still no signs of hope despite the noise around the so-called “phase one deal” by the President of the US.

The chart below shows that all the three critical numbers for the Chinese economy are in a clear downtrend and there seems to be no way out. 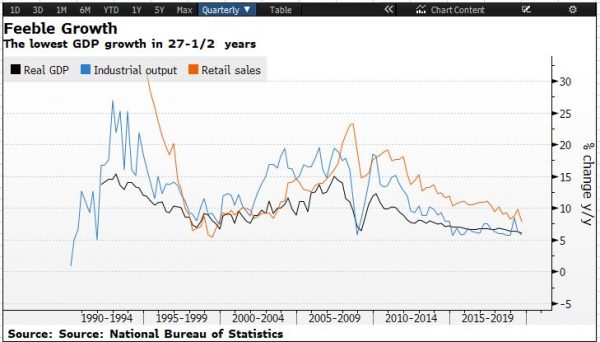 UK: Mini-Budget Delivered, But Will it Deliver?