The sketch of a ‘phase one’ trade deal was hardly announced last week before doubts over what was actually agreed came to the surface. However, it seems to us that both sides want to at least get the ‘phase one’ agreement in place . According to Chinese state media Xinhua ‘the two sides achieved substantial progress in areas including agriculture, intellectual property rights protection, exchange rate, financial services, expansion of trade cooperation, technology transfer and dispute settlement ‘. Taoran Notes, a state media blog on WeChat close to the government, struck a fairly positive tone on Sunday saying that China could easily buy 40-50 billion in agricultural products each year and that the US has shifted to an enforcement mechanism that is more palatable for China .

The deal is yet to be hammered out in a document set to be signed by US President Donald Trump and Chinese President Xi Jinping at the APEC summit in Chile in mid-November. China said Thursday it hopes to reach a phased trade deal with the US as soon as possible . The plan from here is to sign a ‘phase-one’ deal in mid-November and immediately move on to ‘phase two’. Ministry of Commerce representative Gao Feng said that the two sides are in the process of consultation of the first phase agreement and have ‘discussions on the work arrangements for the next phase ‘. The deadline for a ‘phase-two’ agreement may be mid-December when more US tariffs are set to go into effect.

Comment. As we have written in the past weeks, both sides now have an interest in de-escalating the trade war . For a long time Trump has felt he had the upper hand and could easily add tariffs on China. However, with the US economy weakening and manufacturing jobs being threatened (see chart 1), more tariffs on Chinese goods would be a shot in the foot. If Trump can land a ‘phase-one’ deal, he can secure substantial Chinese purchases of agricultural goods to ease the pain for important farm voters. A ‘phase-two’ deal would be much harder to agree on, though, as they regard China’s ‘red lines’. However, Trump could choose to make the necessary compromise to show that the ‘ultimate deal maker’ is actually able to make a big deal, which could give him a much needed boost to the economy and stock markets, which would increase chances of re-election in 2020. 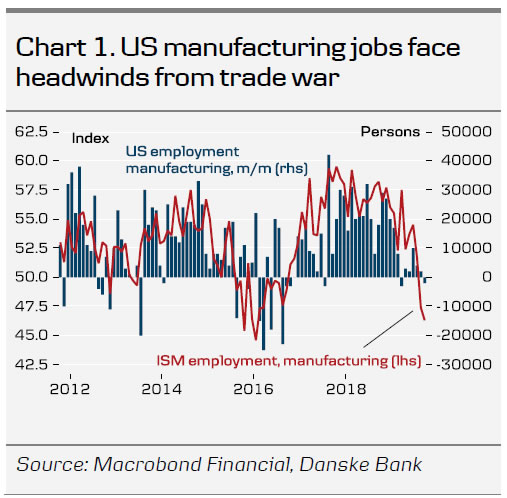 We now see a 50-50 probability of an end of the trade war ahead of the US election , a change from our 60% probability of a no-deal scenario. We still expect plenty of bumps in the road, but Trump seems quite keen on making a bigger deal and he has apparently already compromised on the issue of ‘enforcement’. 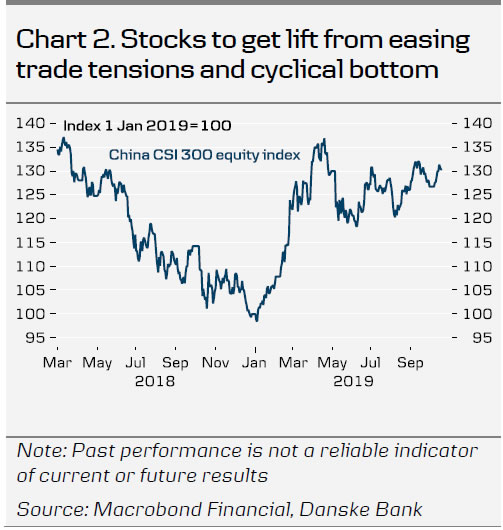 US-China confrontation continues on other fronts

While tensions ease on the trade front, the US-China relationship continues to be on a steep downhill path in most other areas. This week China warned of ‘countermeasures’ over a US bill in Congress that supports Hong Kong protesters. The bill was approved by the House and now goes to the Senate. On Thursday, a China Daily editorial called Washington’s plan to deploy intermediate-range missiles in Asia reckless and a Foreign Ministry director said China ‘would have no choice but to take necessary countermeasures in defence of its national security’. A US congressman accused China of ‘visa blackmail‘ to try and stop a Taiwan visit after China refused to grant visas to a bipartisan group from Congress unless they skipped a planned visit to Taiwan.

Comment. These are just three examples of news this week highlighting the constant confrontation between US and China in a very wide range of areas. It is increasingly hard to see how the two nations can avoid a decoupling over time.

Chinese GDP growth falls but other data points to bottoming

The Chinese economy grew only 6.0% in Q3 down from 6.2% in Q2 (chart 3). It was the lowest rate since the early 1990s. However, a range of indicators suggests the Chinese business cycle reached a low point in Q3. Industrial production jumped higher in September from 4.4% y/y to 5.8% y/y. Credit growth rebounded in September and the pick-up this year points to stronger activity on the horizon. Export growth for September fell short of expectations but taking a step back, the numbers still point to moderate improvement compared to the downbeat levels in Q1 (chart 4). Finally, the OECD leading indicator for China picked up further with the 3-month increase at the highest level in two and a half years. IMF this week lowered its forecast for Chinese growth to 6.1% in 2019 (from 6.2%) and 5.8% in 2020 (from 6.0%), see World Economic Outlook, October 2019. The drivers behind the revision are higher tariffs and weaker global growth. Chinese inflation pushed higher again in September to hit 3.0% y/y from 2.8% y/y in August. It is the highest level in six years and mainly due to a jump in food prices of 11.2% y/y related to the African swine fever. 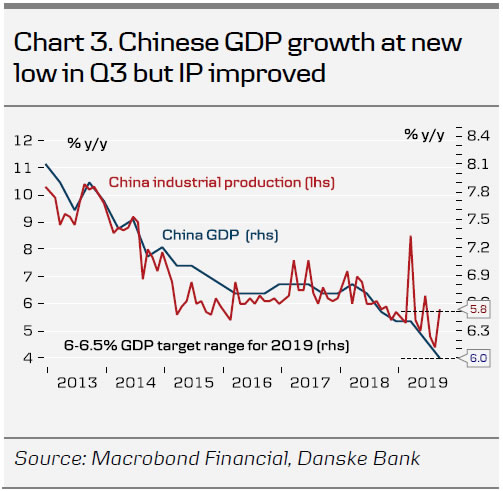 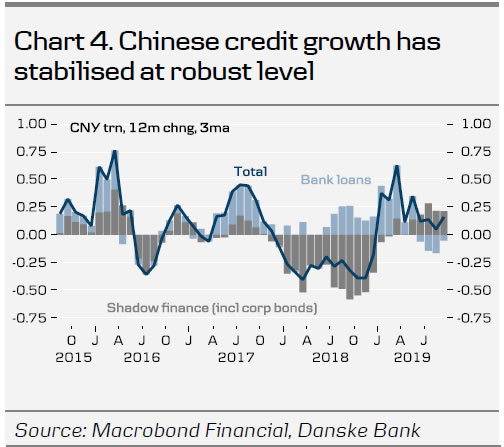 Unfortunately, GDP growth is not a good gauge of the Chinese business cycle, in our view. GDP numbers are simply ‘too smooth’ to be reliable as an indicator for short-term swings in activity. We put more weight on PMIs as a reflection of the short-term business cycle, as it correlates better with trade data and profit growth. As we wrote in our China Weekly Letter last week, we should expect to see lower GDP growth more or less every year over the coming decades as Chinese growth is on a declining path structurally. 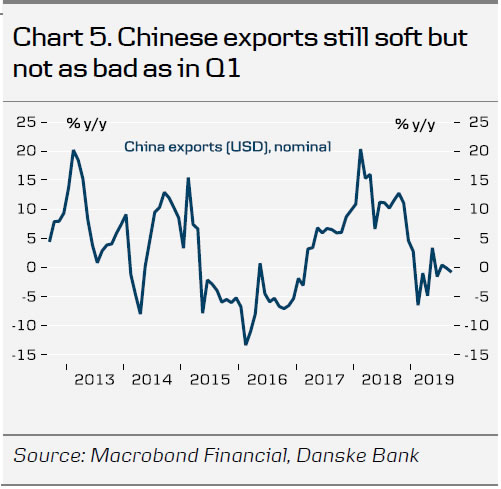 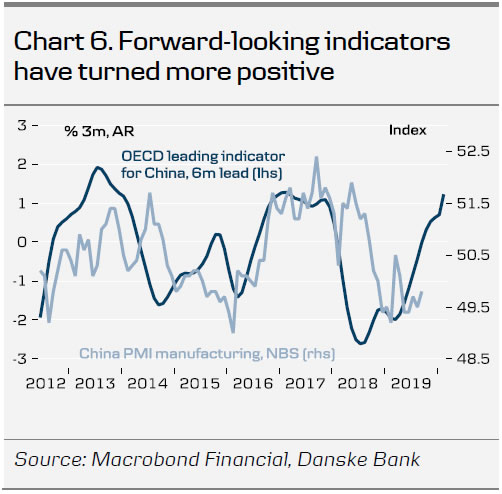 Other China news this week

Angela Merkel is set to make relations with China a top priority as Germany takes over the EU Presidency next year.

Germany will not ban Huawei from national 5G networks defying pressure from the US.

China will scrap business restrictions on foreign banks and brokerages. The financial opening is also part of the trade deal with the US.

Xi and Modi agree on a new trade mechanism at an informal summit in India aimed at re-calibrating strained ties. The two leaders last time met in April last year.