It was a short, but action-packed week for financial markets, with plenty of events both domestically and abroad.

Across the pond, the U.K. and the E.U. have agreed on the new Brexit deal. The news boosted the British Pound to its highest level since May, even though the bigger hurdle of getting the deal through parliament this Saturday still looms. Meanwhile, Chinese GDP data reaffirmed that the U.S.-China trade war was weighing on economic growth. Real gross domestic product (GDP) rose 6.0% year-on-year (y/y) in the third quarter of 2019, a tenth of a point below market expectations, and the slowest pace since data collection began in 1992. “Synchronized slowdown” across major economies and slumping international trade has led the IMF to downgrade it’s global growth forecast for 2019 to 3% – down 0.2pp from its the previous release in July.

State-side, the economic data flow was mixed this week. September’s retail sales report showed that American shoppers appeared to have switched into a hibernation mode as cooler weather set in. Retail sales fell 0.3% in September, ending their six month growth streak (Chart 1). Even online sales took a breather, edging lower for the first time since last December. However, consumer activity remained healthy on a quarterly basis, with sales up 6% (annualized) in Q3. This leaves our third quarter tracking for consumer spending just shy of 3% – a downshift from the second quarter, but still a solid print. Still, with consumer spending currently being a key driver of economic growth as activity slows in other sectors, the decline in September will not escape the Fed’s attention ahead of the FOMC meeting at the end of the month.

Residential construction also took a step back last month with both starts and permits falling. The silver lining is that the single-family segment managed to eke out a small gain, with starts and permits up by 0.3% and 0.8%, respectively. Single-family construction has been gradually ramping up this year, with permits and starts both steadily gaining ground since the spring. As a result, residential investment will likely add to headline GDP growth in third quarter for the first time since the end of 2017. Looking ahead, low mortgage rates and a solid labor market bode well for further modest gains the housing market. Developers are also feeling more optimistic, with builder confidence surging to an impressive 20-month high in October (Chart 2), even as hurdles related to labor and land shortages remain.

These developments were corroborated by the Fed’s Beige Book this week. The report confirmed that economic activity has moderated in the period covering mid-August through September. Tariffs, prolonged uncertainty and slower global growth were deepening the manufacturing slump (echoed in the industrial production data this week) and are pushing businesses to trim their growth outlooks. The limited agreement between China and the U.S. reached last week is unlikely to do much for the business climate while tariffs remain in place. With no signs of stabilization in domestic economic backdrop, the Fed will likely continue to err on a side of caution, opting to support the economy with another interest rate cut this year. 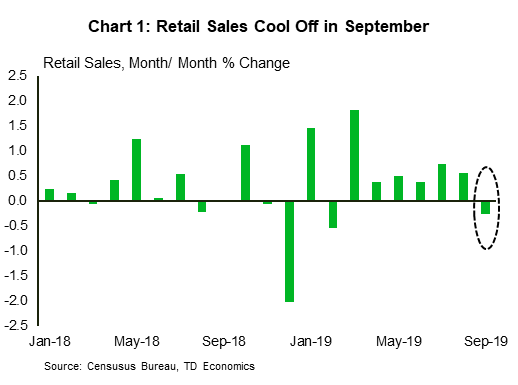 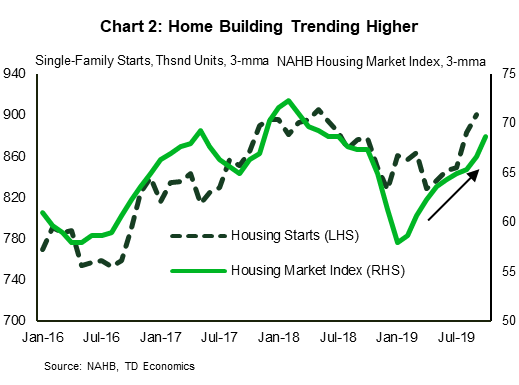 Canadian financial markets were quiet this week. The S&P/TSX Composite Index was virtually flat, but the Canadian dollar continued to appreciate against the USD, as improved risk sentiment on Brexit and trade translated to broad-based weakness in the USD. Oil was down around 1.3% on the week (as of writing). A bearish U.S. inventory report and lingering concerns relating to weakening global demand (especially following China’s GDP release) will continue to weigh on the near-term outlook.

The week’s economic data releases offered little in the way of surprises and were mostly brushed off by markets. Instead, most of the news flow was directed at federal election polls. Indeed, the week’s data releases served to echo the longstanding narrative: Canadian economic data continues to send mixed messages, but the economy has thus far remained resilient in the face of a global economic slowdown.

Existing home sales kicked off the release schedule, posting a seventh consecutive monthly gain (0.6%). Activity was mixed across the regional markets, but the B.C. (+4.7%) and Greater Vancouver Area (+8%) markets continued their recovery. Recent strength in Canadian resale markets and homebuilding confirms that the adjustment seen since early 2018 is now likely in the rear-view mirror. We expect the positive growth in home sales to continue for the next few quarters on the back of low borrowing rates, a still-buoyant labour market, accelerated wage gains, and strong population growth.

Meanwhile, this week’s CPI release delivered more of the same story. Headline inflation surprised slightly to the downside, with a 1.9% headline increase (against consensus estimates for a 2.1% increase). Still, the strength in the Bank of Canada’s core measures overshadowed the soft reading. Indeed, the three core measures are now averaging 2.1% and have remained generally stable for more than a year (Chart 1).

Capping this week’s data releases was a decent manufacturing sales report, with 0.8% nominal and 0.6% volumes increases. The report showed strength across several industries and provinces, in addition to healthy forward-looking indicators. Still, we are cautious on the outlook for this sector. Despite improved sales, the fly in the ointment in the report was a still-elevated inventory/sales ratio at 1.54 (Chart 2). Without an acceleration in sales growth, this presents downside risk to future production growth. Importantly, the softening in global growth and an intensifying global manufacturing downturn will continue to act as key headwinds to demand, especially in export-intensive sub-sectors. The recent disappointment in the ISM manufacturing index south of the border does not bode well for Canada’s manufacturing sector.

As far as monetary policy is concerned, this week’s data releases leave the Bank of Canada in the same tricky spot. The stability of inflation measures and persistent strength in labour markets are likely to keep the central bank on the sidelines in its meeting later this month. However, trade tensions and the ongoing global manufacturing downturn cloud the outlook for exports and business investment, likely to result in future insurance cuts. 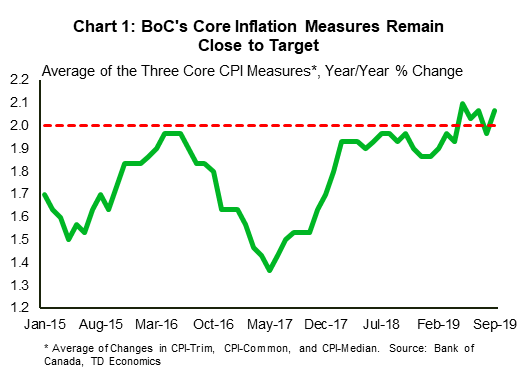 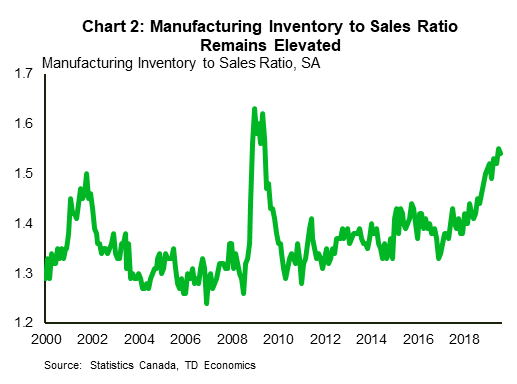 Retail sales are forecast to rise by 0.6% in August on another sizeable pickup in motor vehicle sales, leaving the ex-auto figure little changed for a second consecutive month. August was a record month for light truck sales, helped by ideal weather conditions, a recovering housing market, and robust labour market gains. This should more than offset the decline in passenger car sales while housing market strength should provide further support to durable goods via home furnishings. Lower gasoline prices will exert a modest headwind to total retail sales, leaving the ex. autos and gas measure to post a modest increase, while a modest decline in overall consumer goods prices suggests a more substantial pickup in retail volumes to the benefit of industry-level GDP. This should come as relief for those concerned by the Q2 consumption slowdown, however, a muted performance across June/July will weigh on any rebound in Q3. 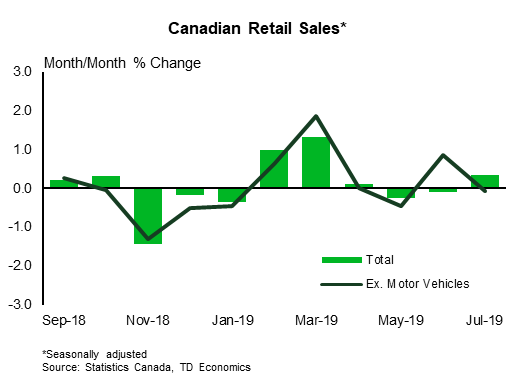 We see a mixed backdrop for Canadian firms heading into Tuesday’s Business Outlook Survey; positive revisions to consensus GDP forecasts hint at sustained strength in expectations for future sales growth, but elevated trade uncertainty will continue to weigh on investment intentions. Even though the “Phase One” US/China agreement has helped bring tensions back to a simmer, the most notable outcome was to delay tariffs which were not on the public’s radar in July which will dampen any enthusiasm from the business sector in response to the deal. Inflation expectations will also be in the spotlight after a sharp drop in the NY Fed’s consumer expectations and the Philly Fed’s SPF, although recent strength in local CPI data helps to limit this risk. Overall, this report is unlikely to make a strong case for near-term cut, keeping the focus on the Bank’s tone at the October meeting as markets push rate cuts into 2020. 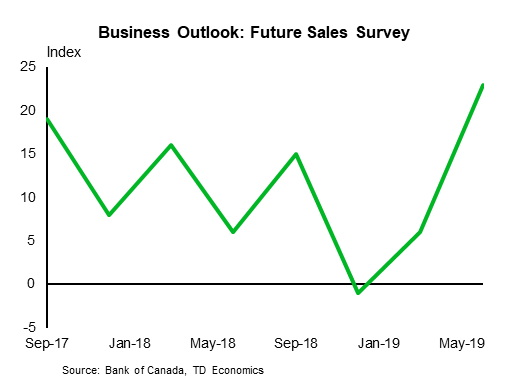