Separately, in Germany, the final consumer price index (CPI) rose 1.1% on an annual basis in October, at par with market expectations and confirming the preliminary figures. In the previous month, the CPI had recorded an increase of 1.2%.

The US dollar gained against its major peers, following the US Federal Reserve Chairman, Jerome Powell’s optimistic outlook for the economy as well as better-than-expected US inflation data.

In the US, data showed that the CPI advanced 1.8% on a yearly basis in October, surpassing market expectations for a rise of 1.7%. In the previous month, the CPI had registered a climb of 1.7%. Further, the MBA mortgage applications rose to its highest level in a month to 9.6% on a weekly basis in the week ended 08 November 2019, following a decline of 0.1% in the prior week. On the contrary, the US posted a budget deficit of $134.5 billion in October, more than market anticipation for a deficit of $132.5 billion. The nation had recorded a surplus of $82.77 billion in the prior month.

The Federal Reserve (Fed) Chairman, Jerome Powell, in his speech reiterated that the central bank would continue to hold its interest rates at their current level, until it observes any material change in the economic outlook. However, he signalled that the economy remains exposed to certain risks including sluggish overseas growth as well as uncertainty surrounding the US-China trade war. Also, he stated that he expects the US economy to keep growing at a solid pace, though it still faces risks from slower overseas growth and trade tensions.

Looking ahead, traders would await Euro-zone and Germany’s gross domestic product (GDP), both for 3Q, set to release in a few hours. Later in the day, the US producer price index for October along with initial jobless claims, will garner significant amount of investors’ attention. 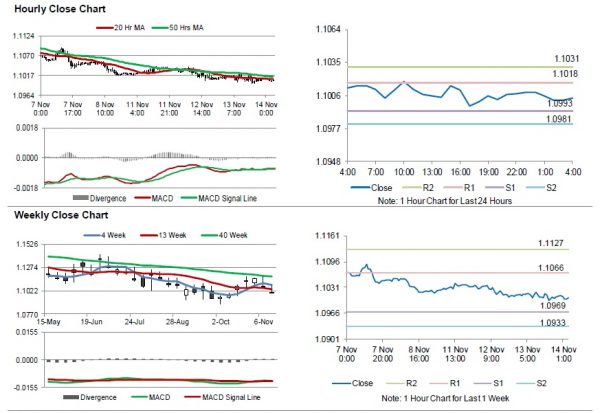