ASX Cash looks set for a lower open in the range of 35pts after ASX Dec Futures pulled away from all-time highs near 6,840 levels and marginally breached its 50d-MA support. The next level of support down comes in the form of the 200d-MA at ~6,750 though it’s expected to remain intact in the near-term alongside Nov. trend support. We think a major catalyst for downside equity retracement likely comes in December in the form of Dec. 15 tariffs, which Trump reiterated last night that he would impose or raise on China should both nations fail to reach a deal. As reported yesterday, the mood in China also seems pessimistic.

Crude back down to US$60/bbl

Brent Crude futures are down 2.7% as Asia walks in, off the back of major headlines that suggested Russia is unlikely to agree to further cuts in oil output due to issues from halting production in wintertime. This puts bearish pressure on the commodity as markets anticipate higher supply. We think more uneasiness seeps in as the previous agreement, where Russia alongside other major oil producers agreed to trim combined output by 1.2mn barrels per day, rolls off in March 2020. OPEC’s next meet on Dec. 5 and Dec. 6 should offer some interesting volatility opportunities across given the uncertain nature of the talks. Brent Crude is yet to break multi-month trend support. 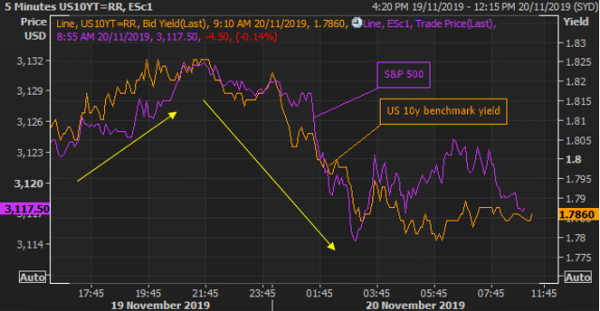 AUDUSD was offered 20pips on the RBA’s release of November Minutes but has since edged back up above 0.68 following a slight uptick in broad risk sentiment. Most of the statement read in line with prior releases but there were some lines of interest that rubbed off as dovish on the reader. Importantly, the Board noted that the case to ease monetary policy at the November meeting was partially offset by the “case to wait and assess the effects of [prior] stimulus”. Members suggested that a reduction in November could have a “different effect on confidence than in the past”. In our view, this alludes to the idea that the RBA are likely less inclined to cut the official cash rate, currently at 0.75%, putting it within arm’s reach of negative territory. Instead, the RBA may be subtly hinting at the potential use of some form of QE in Q1 2020. Overall, we think it’s highly unlikely we see a Dec. rate cut of any sort despite the marginal tick higher in Dec. rate cut pricing and see near-term support for AUDUSD dips.