To be fair, not much has changed or presented itself in the last 24 hours for markets to reverse negative risk moves across equity benchmarks and fixed income markets. In Asia we saw equities and bond yields edge lower while G10 FX lacked conviction with no major moves of note. USDJPY did however find support at 108.3 and now trades around 108.5, but we’d classify this as a small move in the US-China scheme of things.

USDKRW suffered the most gaining +0.7% in a day where ranges were tight across FX, helped by Korea’s sensitive nature to US-China trade hopes. US 10y bond yields have also fallen ~22bps in the last fortnight having been rejected at 1.95% resistance. We think markets will continue to assess the impacts of the Hong Kong bill on US-China trade negotiations and position themselves accordingly. As a reminder, the bill needs to pass the House of Reps and not get vetoed by Trump.

Overall, we maintain our thesis that equity markets are likely to reprice further on more sensible US-China downside scenarios. ASX 200 wiped 0.7% and looks to have further downside towards 6,620/30 levels. We monitor USDCNH directionality for US-China sentiment – USDCNH up being negative and USDCNH down being positive for negotiations. 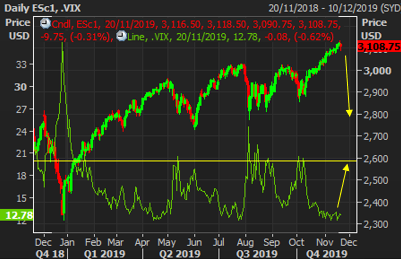 With China very much the major focus of markets at the moment, it was opportune that China’s Premier Li offered up his two cents on policy going forward. His comments, some of which suggested he was cautiously optimistic on trade, were mostly high level and helped steady price action across the board. However, of them, two stood out for us. Li mentioned “China will open wider regardless of shifting dynamics in the external environment” and that “China will keep to its reform agenda”. We think both subtly point at the idea that China are very much on their own path and won’t acquiesce to US demands around large-scale reforms. Therefore, hinting yet again (since there’s been plenty of signs in the past) at the low likelihood that markets see phase 1 fulfilled in a meaningful way. As it stands, we expect phase 1 to slide into next year at the earliest.

On the calendar in Europe

USDCAD traders should pay some attention to BoC Gov. Poloz who speaks at 1.40pm LT later today. It serves as one of the last pieces of commentary markets see before a December blackout period. See FX: USDCAD Upside Ahead Of Scheduled Risk for more details. The US Philly Fed Manufacturing Index also gets air time around 1.30pm LT and is forecast to print 7, a slight jump from the prior month in 5.6. Given broader themes at play, we expect little recoil from the print.