European stock markets are posting decent gains at the start of the week as trade sensitive investors continue to react to the flurry of headlines.

It seems there’s now cause for optimism again after reports that China is open to tightening rules on intellectual property, with Chinese state media claiming a deal is now close. Unfortunately, we’ve been here so many times before I’m struggling to get particularly excited.

Traders are very sensitive to these headlines though as we’ve seen over and over again throughout this process. Even if these reports turn out to be true, there will likely be a price for this concession in the form of tariff removals, something Trump has shown little appetite for so far.

Uber shares are struggling pre-market after TFL refused to grant the company a new licence to operate in London, which is currently home to 45,000 drivers and is a key market for the company. All is not as bad as it seems for the company though as it will be able to continue to operate during the appeal’s process, during which any issues can be resolved.

It does create uncertainty for the company though in a crucial market, not to mention for all of the drivers that, faced with the prospect of not being able to operate under the Uber brand in the future, may reassess their options. It’s also not great PR for the company in a market that’s got plenty of competition for consumers these days.

Improving risk appetite is never good news for gold prices, which are trading a little lower at the start of the week. The fact that this is being driven by promising trade headlines is only further damaging the yellow metal. The rebound we saw in gold off the lows predictably struggled at $1,480 before rotating lower, with traders now eyeing up the $1,440-1,450 area as the next test. A break of this could see focus shift back towards $1,400. 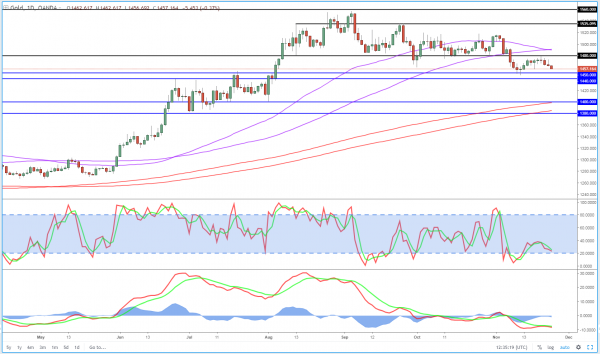 Oil prices are surprisingly steady on Monday, despite the normal sensitivity to trade headlines. Perhaps this is another sign that prices are a little overextended following a strong rally since early October. Momentum is clearly lacking in the more recent rallies in crude, although the strong bounce late last week may give bulls some cause for optimism. 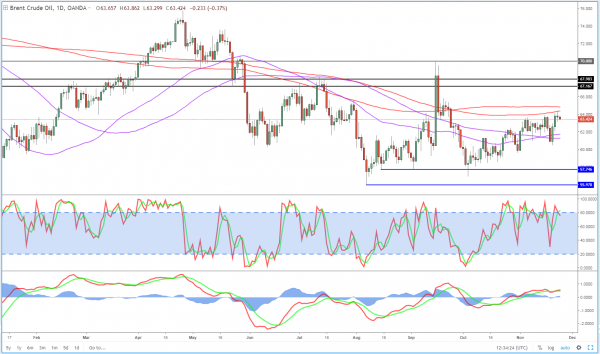