Today during the American session (13:30,GMT) we get the US employment report for November and traders tend to zoom into the release. The forecasts are for the unemployment rate to remain unchanged at 3.6%, the average earnings growth rate also to remain unchanged, at +3.00%yoy and the NFP figure to rise and reach 180k if compared to prior month’s reading of 128k. The stakes may be high for the USD from today’s release as the recent drop of the ISM PMI indicators for November, along with the unexpected drop of the ADP payrolls figure on Wednesday shook the markets. Should the actual rates and figures meet their respective forecasts or surpass them, we could see the USD getting some support as the unemployment rate remains at rather low levels for US standards, the average earnings growth rate is to retain a decent degree of acceleration and the forecasted rise of the NFP figure could constitute a substantial correction of October’s substantial drop. On the flip side, should the release’s readings disappoint the market, we could see the USD tumbling, as such readings would be a continuance to the weak data released at the start of the week, increasing worries about the US economy’s resilience to the protracted trade war mainly with China. USD/JPY corrected lower yesterday, after testing the 109.00 (R1) resistance line. We could see the pair maintaining a downward direction, yet volatility could arise at the release of the US employment report and should there be headlines about the US-Sino relationships, changing possibly the pair’s direction. Should the pair find fresh buying orders along its path, we could see it breaking the 109.00 (R1) resistance line, which contained the pair’s price action yesterday and aim for the 109.70 (R2) resistance level. On the flip side should the pair come under the market’s selling interest, we could see it breaking the 108.35 (S1) support line and aim for the 107.75 (S2) support level.

…while the pound rallies on election hopes…

The pound continued to rise yesterday against the USD, fueled by election hopes, as the Tories seem poised to win a majority in the UK Parliament. The polls seem to be stabilizing about a week ahead of the elections providing the Conservatives a lead of about 11% against Labor. Such a lead, if materialized, according to political analysts should be able to provide a comfortable majority which would enable Boris Johnson to deliver Brexit quite quickly and raise some political uncertainty off the pound. We expect the pound to remain supported should the current trend in the polls remain unchanged. Cable continued to rise yesterday reaching the 1.3170 (R1) resistance line yet stabilizing below it. The upward motion could be continued today. It should be noted though that the sideways motion during today’s Asian session seems to have stabilized the pair. Also, the RSI indicator in the 4 hour chart, has surpassed the reading of 70, confirming the bull’s dominance, however may also imply that the pair’s long position is rather overcrowded. Should the bulls maintain control over the pair’s direction, we could see the pair breaking the 1.3170 (R1) resistance line and aim for the 1.3340 (R2) resistance level. On the other hand, should the bears take over, we could see the pair breaking the 1.3015 (S1) support line and aim for lower grounds. 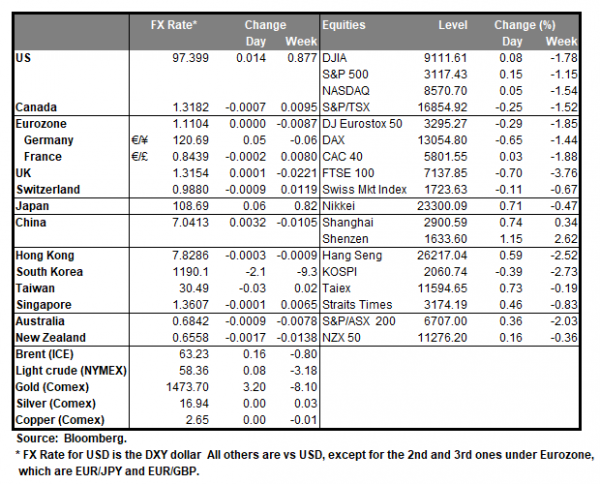