One Small Step for Manchester

The U.K. Conservative Party secured a sizable Parliamentary majority at yesterday’s general election, winning 364 seats in the House of Commons, far more than the 320 seats needed for a working majority. With a Conservative majority now firmly in place, we would expect U.K. Parliament to formally write into U.K. law the withdrawal agreement that takes the U.K. out of the E.U. by January 31, 2020. Per the E.U. “flex-tension” granted a few weeks ago, even if the withdrawal deal is ratified in early or mid-January, the U.K. cannot formally leave the E.U. until January 31. This description probably oversimplifies the next steps, and there are certainly more nuances to the process of formally ratifying and writing into law the withdrawal agreement. That said, we think market focus will largely shift beyond the more procedural steps that must take place over the next few weeks to pass the withdrawal agreement and more onto the next phase of the Brexit process: longer-term trade talks between the E.U. and U.K. 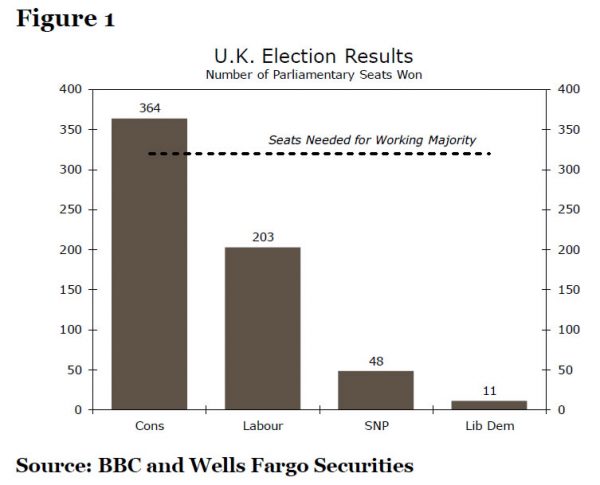 As a reminder, if the withdrawal agreement is ratified in its current form, the U.K. would officially no longer be a member state of the European Union starting on January 31, 2020, but from an operational standpoint, very little would change at first. The withdrawal agreement provides for a “transition period” starting on February 1, 2020 and lasting until December 31, 2020, during which there will still be tariff-free trade and free movement of people between the E.U. and U.K. This “standstill” in relations is designed to provide additional time to work out the specifics of a longer-term trade deal that will take effect after the transition period ends.

As we and others have pointed out numerous times, 11 months is probably not enough time to agree on a longer-term trade deal. Moreover, in reality, the time available for actual bilateral trade discussions is far less than 11 months. The two sides must first set out their objectives in the talks, while there must also be time on the back end to ratify any trade agreement, a process which requires unanimous approval by E.U. member states, and of course U.K. Parliament as well. In addition, negotiators must decide by July 1, 2020 whether they want to extend the transition period by up to two years, another issue that will likely consume a fair bit of political oxygen. In that sense, the 2020 Brexit environment for the pound may look very similar to the 2019 environment—elevated pound volatility, concerns over deadlines and multiple rounds of negotiations.

Peering into the Abyss on Trade

The withdrawal agreement reached between the U.K. and E.U. a few months ago provides some guidelines for what the future of U.K.-E.U. trade will look like. Perhaps the most important provision is the protocol on Ireland/Northern Ireland. The protocol states that, after the transition period ends, a customs border will be put in place between Northern Ireland and the rest of the United Kingdom (i.e., England, Scotland and Wales). If the trade agreement reached between the U.K. and E.U. involves tariffs on goods of any kind, then a good shipped from England (no longer an E.U. member state), for example, to Ireland (an E.U. member state), will be tariffed when it crosses from England to Northern Ireland. The primary purpose of this provision is to avoid a hard border between Ireland and Northern Ireland.

That said, in terms of the actual substance of any potential E.U.-U.K trade deal (i.e., tariff schedules, regulations on services, etc.), the withdrawal agreement says very little of substance about either side’s objectives in trade talks. At the highest level, the two sides basically have two options for how to conduct longer-term trade talks: modifying an off-the-shelf agreement (“Norway style,” “Canada plus,” etc.) or drawing up a new bespoke agreement. Modifying an off-the-shelf agreement may be difficult given the sheer breadth and depth of economic and trade ties between the E.U. and U.K., and most indications from Johnson’s government have been that it will seek a more bottom-up, bespoke approach.

Before these talks even begin, however, negotiators on both sides are likely to set out their objectives in trade talks. That said, as was the case with Theresa May’s “red lines” in the original Brexit talks, we expect these positions to become more flexible once negotiations begin. This early in the process, we think it is futile to spill too much ink debating what may or may not come of the talks, but we think there are three high-level points worth making regarding E.U.-U.K. trade talks.

First, Boris Johnson’s government is likely to take a hard line in its negotiating objectives. More specifically, the government is likely to prioritize reducing the free movement of people across borders and curbing regulation and oversight from E.U. authorities, while also emphasizing the need to have flexibility to negotiate free trade deals with other countries. Johnson may also take a hard line on the timing of a trade deal and delivering the “real” Brexit by December 2020, the current scheduled end to the transition period. In the end, this may be the red line that the government is most likely to back down on, although we would not be surprised to see his government retreat on other red lines as well as the talks proceed.

Second, while much of the focus thus far in discussions around post-Brexit E.U.-U.K. relations has been on trade in goods, we would argue that trade in services is nearly as important and has thus far received relatively little attention. In 2018, roughly 40% of all U.K. exports of goods and services to the E.U. were accounted for by services exports. A large portion of these services exports are comprised of exports of law, consulting and financial services, all of which could face at least some increase in cross-border restrictions under any new E.U.-U.K. trade deal. In particular, the U.K. could lose its “passporting” rights, whereby U.K. domiciled companies (most notably banks) are able to operate branches across the European Union with minimal additional requirements, which could be a significant curb on U.K. services exports. More broadly, unlike goods exports, it may be more difficult to find replacement demand for U.K. services exports from other non-E.U. countries given the importance of geographical proximity on demand.

Finally, some version of a “no deal” Brexit is still possible. Indeed, if the E.U. and U.K. do not reach and ratify a trade agreement by December 31, 2020 and do not agree to extend the transition period, the U.K. will be out of the E.U. with no trade deal in place, conceptually similar to a “no deal” Brexit. The main difference between a “no deal” Brexit after the withdrawal agreement is passed is that the aforementioned protocol on Northern Ireland will be put in place, helping to avert a hard Irish border, while there will also have been an agreement by the U.K. to settle its outstanding financial obligations to the E.U. (~₤30B). As a technical note, if the two sides reach a trade deal by the end of the transition period but do not have time to ratify the deal, it can be applied in provisional form, and will only be rescinded if either side decides to vote the deal down.